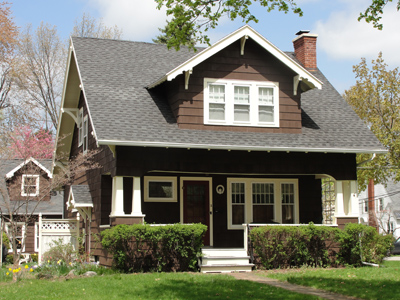 Striding alongside the Prairie house style and sharing many of its architectural details, was the American bungalow. Both styles pushed against the over decorated Victorian styles of the past. The bungalow, based on the Bungaloid frame, referred to a low house with galleries on all sides that had its origins in the East Indian/Bengali region. It was introduced into the US in the mid to late 19th century.

But it was the brothers Greene, Charles and Henry, located in Pasadena, California, schooled in the manual arts and trained as architects, who married up the surging arts and crafts movement with the

This home at 2 Clifford Street has knee braces under the eaves, exposed roof beams, columns with sloping sides, and a front dormer with the same details.

popular bungalow form in the United States. It was the California bungalow that became the national rage and was reproduced into the various forms of middle working class housing that we know today. Both Frank Lloyd Wright and the Greene brothers were influenced by Japanese wooden architecture. And several of the bungalow details: wood shingle or clapboard siding, stick style cross bracing and Tudor half timbering were passed forward from the earlier 19th century house styles.

The Arts and Crafts movement, as personified by William Morris in England during the 1860's, was a rebellion against the machine driven products of the industrial revolution. Emphasizing a return to hand crafted objects, it involved a number of artistic and aesthetic forms. It combined architecture, interior design, applied arts and decorative arts styles and brought them together into a national movement. Originally designed to produce handcrafted articles, the movement eventually grew to encompass living craft communities such as the Roycrofters in East Aurora, New York and Mission Style furniture inspired by Gustav Stickley. It was Stickley who first used "craftsman" to describe the movement.

The one and a half story Craftsman at 59 Miles Avenue was built in 1925.

The craftsman bungalows built across the country were smaller than the landmark sized California models. Taste and style were changing in the U.S. and the class of homebuyers was shifting from upper to middle class folks who did not have nearly the housing requirements of their wealthier cousins. Craftsman bungalows were popularized through pattern books and magazines that circulated throughout the country and led to the development of house 'kits' assembled with pre-cut lumber and trim details. These kits could be purchased from Sears, Roebuck or the Aladdin Co. for a reasonable price and then assembled by local labor. Fairport has many examples of this popular vernacular house style.

These are usually one or one and a half story homes, with a low pitched roof overhanging a deep unenclosed eave that in turn shelters a porch. Decorative beams or side braces are seen under the deep gable roofs.

The porch can be full or partial and runs along the front of the house. The upper columns that support the low overhanging roof are usually short and square but rest on massive piers that begin on the ground and continue upwards to the roof, sometimes through the porch floor. They can be tapered and are clad with stone, brick, concrete or stucco, but shingle and clapboard are used as well.

Double hung windows in Craftsman houses are similar to those found in the Prairie style and contain variable geometric patterns in the upper sash. Four-over-one or six-over-one sash windows are the norm.

Doors too are similar to the Prairie style and can use craftsman inspired details in the door glass and surrounds. 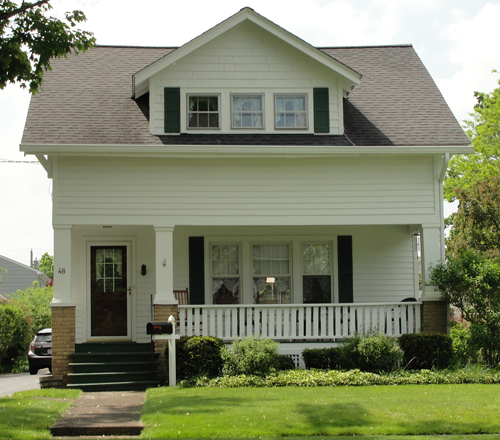 48 Dewey Avenue is unusual in that it has a second story with a gabled dormer.

31 Nelson Street is a front gabled roof type with a partial width porch and extended gable on the right. 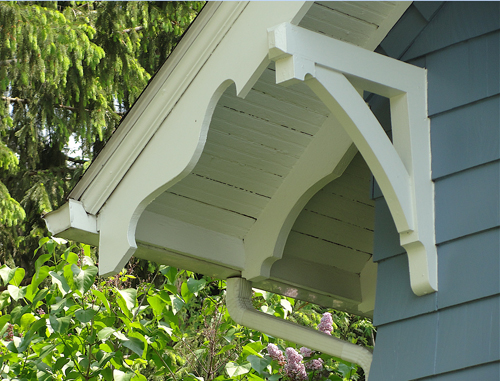 This view of 41 Nelson Street is a side gabled subtype with the front gabled dormer and full porch.

54 East Street is an example of Craftsman made with Sears & Roebuck house kit.

Craftsmans in the Village of Fairport:

Craftsman Structures in the Town of Perinton:

* Modified – These homes may have had vinyl siding installed that has covered shingle siding and stone porch supports. Eave brackets may have been removed, porches enclosed, windows replaced, rooms or porches added.