Memories of Fairport, NY - Dating Back to 1900, by Dr. James Welch in PDF format

The government was much the same as today. Trustees and the Chief Executive officer were called a President of the Board instead of the title of Mayor, as it is today. There was no salary for trustees or president.

At that time the police force consisted of the Chief, who worked seven days a week, from 7:00 P.M. to 3:00 A.M. As I recall, the salary was $45 or $50 a month. There were special police appointed when an emergency called for it. Most of the arrests were for public intoxication.

There were ten or eleven saloons and hotels. Only one saloon on South Main Street, east side next to the bridge. The remainder were on North Main Street except for one on High Street. This area from the north side of Main Street Bridge to East Avenue was called "whiskey flats" by some citizens.

The local jail was a small brick building with three cells and a small, we might call, a reception room with a small stove for heating in cold weather. Prisoners were only kept over-night here. If they were convicted, our chief took them to the Monroe County Penitentiary.

The village policeman's duties were to try the doors of all stores and public places to make sure they were locked. There were many hoboes in those days (early 1900's) that rode the freight trains. Some would get off here and with no place to sleep; the police would put them in a cell for the night and let them go in the morning. This jail was torn down and jail-cells were placed in the basement of the Town Hall a few years ago. These were given up later.

When we established our own water supply from an underground river, the pumps were located on John Street, now renamed State Street. A standpipe was built on Summit Street to create pressure in the water mains. There was an ample supply of water but it was very hard. So in those days (1890-1920) every house had a cistern where the water from the rainfall was conducted from the roof of the house to the cistern. This water was very soft and ideal for laundry purposes.

There were no paved streets in Fairport until North Main Street was paved with bricks. That was about 1910. In the spring of the year the village had a road scraper - an apparatus with large blades in the center, between the four wheels, which could he lowered or raised to the desired height.

The road was packed down with heavy rollers. These were pulled by horses. In the summer the roads became very dusty, so the village used a large water tank, pulled by horses, to wet down the streets to hold the dust down. Some people, of course, used their own hose to water down in front of their homes.

Some of the names of the early police chiefs of Fairport were: Herman Pintler, Dan Morell, Manly Warner, P. A. Welch, Richard Dwyer, Del Newman, Frank Oestrike and Mike Swift. During the Prohibition Era, a fellow named Johnson was Chief. Johnson later became a prohibition agent for U.S. Government in Rochester. After these men who were chiefs of police were: John Young, Charlie Kinney, Tom Aldrich and Herman Stolt.

Among some of the earlier Presidents of the Village were: James Cotter, Sr., Gleason Wilcox, Irving Eldridge, Harry VanHorn, Dr. James Welch and Stuart Pierce, Sr.

Early fire apparatus were pulled by men, or if a man with a team of horses got there first, he was given $5 for hauling the hosecart or hook and ladder truck to the location of the fire. A steam whistle at the Deland Chemical Plant sounded the alarm, with signals the same as now. However, this whistle was much louder so it could be heard all over the town. It also served as whistle for 7:00 A.M., 12 noon, and 6:00 P.M.

The schools we attended were the Northside School on East Avenue, which had four rooms, two grades to each room. The pupils south of the canal went to West Church Street School, which also had eight grades and the High School. The North-side School was added on in 1926, later sold to Crosman Arms who later give it back to the village. It is now known as Crosman Center.

Fairport has had two lift bridges. The first at the end of West Church Street which was changed to a stationary bridge when the barge canal was created. The other was the Main Street Bridge, opened in 1914.

Much shipping thru Fairport was done on the Canal, but the oil pipelines took the place of oil barges. There are more pleasure boats than any others now. The building at 42 West Avenue, where Tom Brothers has his business, used to be at the northwest corner of South Main and West Avenue but was moved to its present site in 1911 or 1912. Boys used to dive from the top of this building into the canal. The Village passed an ordinance forbidding any swimming near the bridge.

The New York Central was the main transportation for people going to Rochester or places east of here. There were better than twenty trains a day stopping here at one time.

An early morning train called "The Patsy-White" from the conductor's name, used to carry passengers from Lyons, Newark, Palmyra, Macedon, Fairport and East Rochester to factories in Rochester or the towns in between.

There was another train made up in Fairport called the "Train Despatch Special" which left Fairport around 5:40 P.M. to take carshop workers into Rochester, the same train brought out in the morning to work.

There was another train called the "Theater Train" which left here about 7:00 P.M., arrived in Rochester in time to get to the theater and returned from Rochester about 11:00 P.M

We had a large freight house on the west side of North Main Street, which handled much freight. That and the New York Central Depot have been torn down. The automobile and the trucks put them out of usefulness.

Later the home telephone was established in Fairport across the street from Bell and was located on the second floor of Best Building. Fred Best was the first manager. The stores in the Village had to have both Bell and Home, as some residents had one and some the other. Rochester Telephone Company later took over both.

Our first trolley service began in 1906 and ended in 1931. In the beginning two different groups were striving for the franchise to operate through Fairport. The Rochester-Syracuse and Eastern were planning to cross North Main Street at State Street to gain their franchise.

They had brought a hundred workers from the Bowery in New York City. They were a tough lot. The Village had prepared for them. They had extra police and sheriff deputies on hand. They attempted to plow a furrow across Main Street, but as soon as they started the police seized the horses and plows and arrested the men handling the plow.

They attempted this seven times and soon the little jail was full of the Bowery characters. In the mean time the Village Board had got a court injunction stopping any more attempts to plow across Main Street.

However, Rochester-Syracuse and Eastern won out. The other company had already laid tracks down on the north end of South Main. They remained there until 1921, when South Main Street was paved.

We had excellent trolley service. There were locals, limited and a stub service from Fairport to Culver Road or downtown Rochester every twenty minutes.

“Old Home Week” was a big event in the history of Fairport. It occurred August 2 to 8th, 1908. Ball games and carnival activities were held in what was known at that time as Deland Park. (Now two streets, Park A and B) There was a balloon ascension in the park, and a very large parade.

Many former residents returned to be greeted by a large arch erected on Main Street bridge which read, “Fairport extends the glad hand.” There were a rash of fires on the last night of the celebration

During a smallpox epidemic, we had a pest house on Turk Hill Road between High and East Whitney Roads. As I recall it, there was one death from smallpox in the Village.That recalls to my memory, a Dr. Pratt, a fair physician who made his house calls on a bicycle.

I recall the milkmen delivering their milk from cans with long ladles, which they dipped into the can and poured it in to containers, which the housewife left on the porch or steps. I don’t believe they would pass sanitary laws today.

The early groceries stores (not all) used to send a clerk to take orders for groceries from people and would deliver them in the afternoon. Most of the stores made two deliveries a day by horse and wagon.

Many people used to have horses for carriage use or saddle horses to ride. Also many people had chickens for eggs and for eating. Some also raised fighting game cocks. I do not believe any of these are now permitted in the Village.

In the summer and fall, many local women were employed in the canning factories Cobb Preserving Company and Thomas Canning Factory. Also, there were three dry houses in Fairport, where women were employed peeling and coring apples to be dried during the fall season.

Band concerts on Saturday nights were given by the famous Deland Military Band from a grandstand in front of the Deland Chemical Building. Later years, the Fairport Band gave concerts from the Town Hall. All the stores kept open Saturday night, as many farmers came to town to do their shopping after the concert was over.

Most villagers used to have gardens and raised many of their vegetables, strawberries, melons, etc. Seasonal employment during the berry season was given to children and women in the many berry patches we used to have around Fairport.

We had two good hotels in Fairport that were well-known for their fine food. Many local people enjoyed Sunday dinners there. They were also used by traveling men who used to call on the local merchants and would go to nearby places with a horse and wagon, which they would get at Osborn house.

I can recall the drummers, as they were called, bringing trunks of sample shoes to Morey’s Store for Mr. Morey to select what he desired for his trade. A local cartman met these drummers at the station and delivered them to the stores. Of course, this was before the days of the automobile.

Things like gas which we take for granted were opposed by quite a number of citizens when it was first proposed, a little over sixty years ago.

Shaws-Hall on West Avenue sometimes called “Shaws Opera House” was the scene of many home talent plays, minstrel shows, and one hypnotist, I recall, was here for some time. Later, he made good on big-time vaudeville. His name was “Pauline”.

In 1920-1921 dances held in Clark Building were quite popular and well attended. A group from Rochester caused trouble with some of the Fairport people at the dances. Animosity developed between them. One night the group from Rochester came to Fairport and were said to have got in a fight with a Fairport group. Police were called. Cars of Rochester group were ordered to stop but did not. As I can remember, a deputized, special officer fired a shot, which killed one of the Rochester men. The rest of the group were arrested and received prison sentences. This occurred in the Fall, 1921.

This account was written by Dr. James Welch, DDS on May 3, 1976.
Edited February 2001 by Perinton Historical Society Trustee; John Jongen 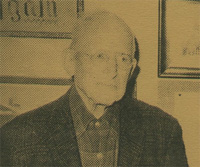