Buildings 9, 10, and 11 of the Cobb Preserving Company located at 1000 Turk Hill Road were designated landmarks of the Village of Fairport in 2020. The first of the three buildings, #9 was built in 1893[1]. The Cobb Preserving Company was owned by Amos H. Cobb who purchased the business from his cousin, Ezra A. Edgett. These three buildings, which are connected end to end, are just a part of a larger complex of buildings that made up the Cobb Preserving and the Crosman Arms Company. They were designated because the buildings are a significant representation of the history of preserving and canning in the Fairport area.

Built alongside the Erie Canal for ease of transportation of goods. The Fruit Canning Works[2] factory was built in 1872 by E. A. Edgett of Newark, NY. Edgett is responsible for bringing Fairport’s largest industry to the town.[3]  In 1881, the factory became the Cobb Preserving Company. The complex later became factory #3 for the New York Canners, Inc. All were major employers for local residents and seasonal labor from other towns including Polish families from the Buffalo area. The Cobb Preserving along with other canning companies in the area provided a market for area farm produce. 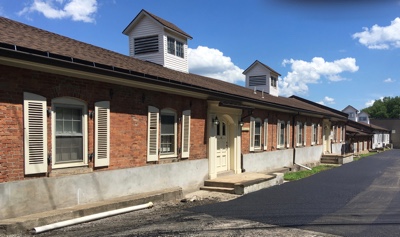 This photo taken in 2020 shows building #9 on the south side which looks with segmentally arched window opening, shutters, cupulas and rounded doors.

The manufacture of compressed air and Co2 guns was a highly specialized business with specialized machining and equipment required which made them very successful.[4]  They operated on this site until the 1980s.[5]

These buildings are the last remaining preserving and canning facilities of many in the area that took advantage of the transportation offered by the Erie Canal and the fruits and vegetables grown in the surrounding area.

The Advancement of Canning Technology – The Sanitary Can

Early cans were made by hand during the winter months out of tin from Wales. A can-maker could earn $2 per 10-hour day. The cylindrical body was cut by a foot operated shears and the top and bottoms were cut by a foot-lever press. A second press cut a 1 1/2" diameter hole in the top. These parts were soldered together and the fruit or vegetables were crammed through the opening. A plug was soldered over the hole. The filled can was sterilized in a hot water bath. The cans were stored for a period to test if the seal had taken. If the soldered can did not hold, it would be dumped into the canal.

In 1897, 2,000,000 cans of cherries, peaches, pears, plums, berries, quinces, corn, tomatoes, peas and succotash were packed and shipped by the Cobb Preserving Company, mostly on the Erie Canal. 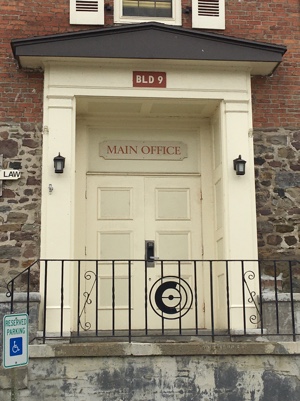 The perfection of the machined double seamed sanitary can began in 1898 when William Bogel introduced the new technology to George W. Cobb, the son of Amos Cobb. Bogel was the owner of Bogel & Scott, food brokers who sold the output of the Cobb factory. The new can was being made by the Max Ams Machine Company without the use of solder, taking a cue from advances in canning from Europe. [6]

In a three-man partnership to perfect the solderless can, Ams provided the machinery, Bogel the funding and Cobb the work with trial and error. The new cans could be filled before the top was placed allowing for larger pieces of produce. Also, the contents looked and tasted better without suffering from carbonized sugar contamination created by the soldering process used to seal the top.

There is a concrete stoop with an iron railing likely installed by the Crossman company that has a “c” incorporated into the design. This is the main entrance of building #9.

In 1898, the Cobb Preserving Co. canned all their Bartlett pears in Ams double seamed sanitary cans.By 1904 they were convinced that the new canning process was a success. Along with Frederick Cobb, Goerge’s brother, they formed the Sanitary Can Company. 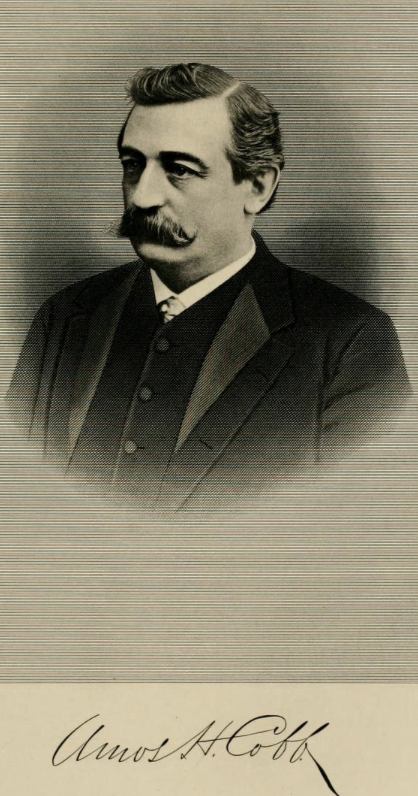 The Cobb Preserving Company was owned by Amos Hubbell Cobb (1839 – 1891) [8] who purchased the business from his cousin, Ezra A. Edgett. Edgett was from Newark and started Fairport's first canning business at this site in 1872. The business was run by Edgett's brother, Ananias. The brothers had previous experience in canning technology. In 1854, they planted the first acre of corn to be canned in New York State. A. H. Cobb was part of that venture and was 14.

In 1857, Cobb worked for the Aaron Kemp factory, one of the earliest canned goods manufacturers in New York City and within two years was in charge. In 1864, Cobb married Angeline M. Hodgman (1840 – 1928) and established their home in Brooklyn. That same year he joined U. H. Dudley, another canning business. In 1867, he was a founding partner of Goodwin & Cobb which imported wallpaper and had offices in New York City and London. [9]

After purchasing the Edgett factory, Cobb moved his family; his wife and four sons to Fairport.
They traveled on the New York Central Railroad. The family's furniture and other belongings were shipped by packet boat on the Erie Canal. He and his wife had a fifth child, a daughter named Angeline Marie after moving to Fairport.

A. H. Cobb died in 1891 at the age of 51. After his death the business was run by his estate which included his sons, George Watson Cobb (1871 – 1945) [10], Fred and Clarence. George was part of a small group that perfected the sanitary can from 1898 to 1904. It was in that year that Cobb along with partners Max Ams and William Bogel formed the Sanitary Can Company. By 1908 he was Vice-President of the Sanitary Can. When the business was absorbed by the American Can Co. (Canco) he relocated to New York City. In 1910, he became assistant general sales manager and in 1923 general sales manager. He retired in 1932. While in Fairport, he was a village trustee for 4 years and president for a year in 1904. [11]George Cobb married Leora DeLand, the daughter of Levi. J. DeLand and for a number of years owned the Newman-Dean House at 11 W. Church St.

Although a simple example of this ornate style these industrial buildings utilized many features of the Italianate style that was incorporated into homes and public buildings during this time. The features include the arched doors, window openings and curved top louvered shutters, double doors with panels and cupolas. 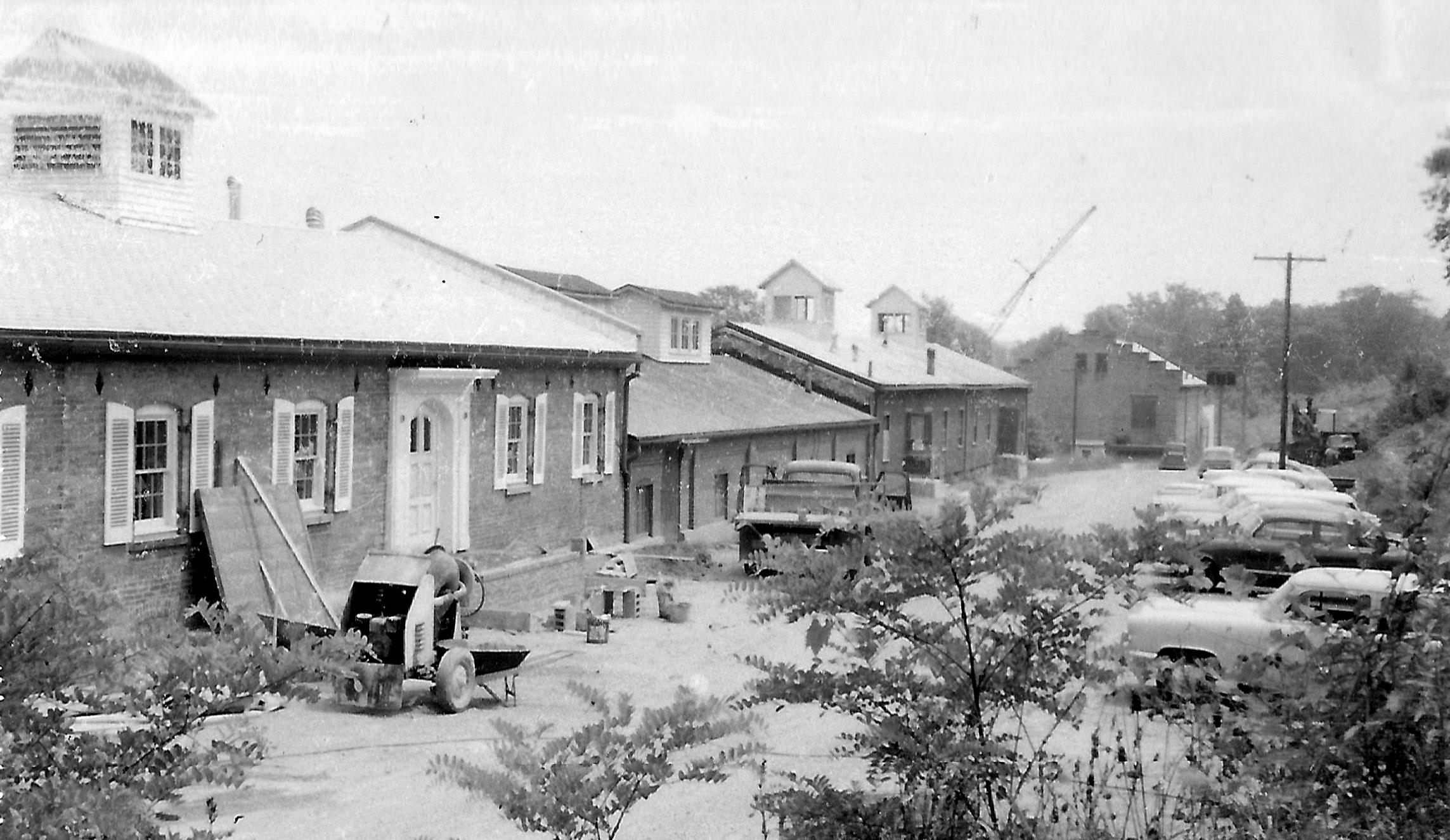 All three buildings are built into the sloping landscape with the first story of building #9 on the south side built on a stone basement that is fully above grade. The landscape makes the second story accessible on the north side. They are all brick with post & beam timber floors and roof, masonry load bearing walls. Each building has two cupolas on the ridge of their gable roofs. Brick gable end walls form parapets on between building #9 and #10 that extend above the roof.

The first building built for the Cobb Preserving Co. in 1893, # 9, is a 2-story 35’ by 120’ brick building. The brick pattern of the walls of the building are a modified English bond with a header brick layer every eighth course in between the stretcher bricks., double rowlock bricks over arched window openings, cut stone sills on the second story and metal truss tension plate visible on exterior. Because of the slope of the land, it is 2 -stories on the north and 1-story on the south side. The ground level walls on the north are constructed of a thick foundation of field stone.

The main door on the north west side has paneled double doors with a side pilasters and pediment roof. There is a concrete stoop with an iron railing likely installed by the Crossman company that has a “c” incorporated into the design. There are 2 large arched top windows on the north side that are inset into the walls. The one on the west end has 15 lites, the other also has divided lights. An early Sanborn map shows a bridge in that location from #9 to the building across the access road. Doors on the south side have 6 panels arched top with 2 glass lites. The door surrounds are arched with the side pilasters and shed roof overhangs. The windows are 6 over 6 double hung style with curved top louvered shutters.

Building #10 is a 1 ½-story brick building on the north side and 1-story on the south side. The brick pattern is modified English bond with a header brick layer every eighth course in between the stretcher bricks. The top of the wall uses a corbel pattern to bring the top of the parapet wall flush to the brick pilasters. The south side has a door with 6 panels, 2 of which have lites. The door has a shed roof overhang. The windows are arched but half the size of the windows on the front. This warehouse building is 30' x 74'. It was built between 1907 and 1924.

In the complex it is the closest buildings to Turk Hill Road and is an anchor for the neighborhood. Three warehouse buildings are connected end to end. The buildings are adjacent to the Erie Canal National Heritage Corridor. The canal is listed on the New York State and National Registers of Historic Places. 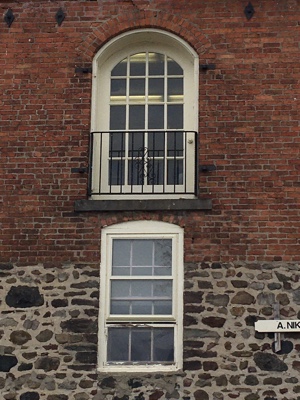 Building #9 has a large arched window with the same 2 layers of rowlock brick that is over all the windows of #9 and #10. This window is deeply inset into the wall and has 20 lites. 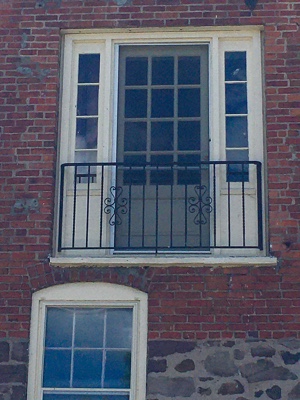 On the east end of building #9 on the upper level is a door with sidelights. An early Sanborn map shows a bridge in that location from #9 to the building across the access road. 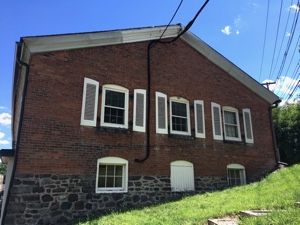 All three buildings are built into the sloping landscape with the first story of building #9 on the south side built on a stone basement that is fully above grade.

Close up of the brick pattern and segmental arched window opening found in buildings 9 and 10. 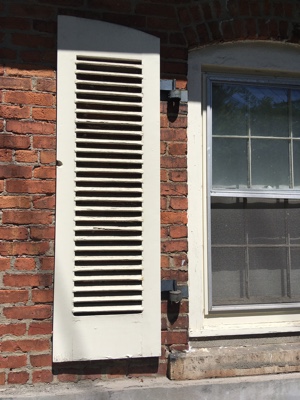 The windows of building 9 and 10 are 6 over 6 double hung style with curved top louvered shutters. 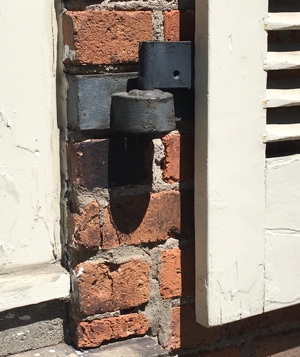 Close up image of shutter hindge.

In building #10 the top of the wall uses a corbel pattern to bring the top of the parapet flush to the brick pilasters. The brick pattern of the walls of building 9 and 10 are a modified English bond with a header brick layer every eighth course in between the stretcher bricks.

In this image of the brick of building #9 shows a header brick layer every eighth course in between the stretcher bricks.  Also visible metal truss tension plate visible on exterior.