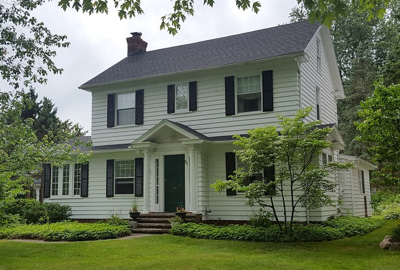 Many houses on Dewey are typical of the Colonial Revival style. This style was popular from 1880 to 1955, and featured details such as a symmetrical front facade, front entrance fanlights and sidelights and doorways with pediments. Often they had two stories with side-gables or hip roofs, a columned porch, and multi-paned double hung windows. Eighty Dewey Avenue, which is on the tour, and 75 Dewey have many of these features.

80 Dewey Avenue has a center entrance with a one-story broken pediment portico. There is a pent roof  that extends across the front of the house.

Within the Colonial Revival style is the four square form often called the American Four Square. You will often see this same form in a Craftsman and Prairie style. The remaining houses on this tour are variations of this form, often characterized by 4 rooms upstairs and 4 rooms downstairs, forming a square, boxy shape. These houses worked well on narrow lots and were built with available materials, such as brick or wood. Wide full porches are an attractive feature, and center dormers direct your eye to the roof line.

Two other house styles you may notice on Dewey are a Craftsman in a bungalow style at 47 Dewey, and the side-by-side shotgun form house at 10 Dewey Avenue. 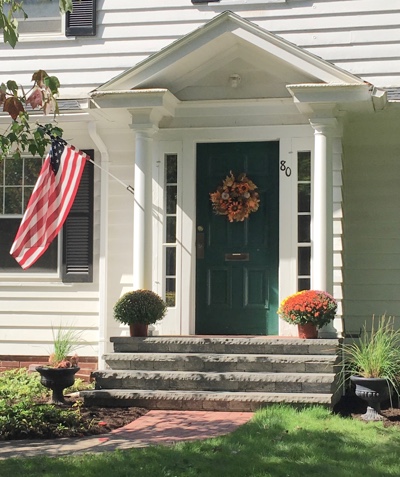 This Colonial Revival home was likely built circa 1927. It has side gables and a center entrance, with a side wing on the south side, and a bay on the north side. The entrance has a one-story portico with a broken pediment roof supported by round colonial columns. The steps and foundation are brick.The single paneled door has side lights. The home has well – preserved wood clapboard siding.

The portico is supported by round doric columns. There are sidelights beside the single paneled door.

A pent roof between the ground level and 2nd floor extends across the front of house, and connects with the side wing and to a roof above a rectangular bay window on the north side. The main windows of the home are double hung with 8 panes over 1 pane. The side wing has a row of 3 windows on the front side, and a row of 5 windows on the south end. Each window has 10 panes.

The interior of the home has gumwood trim in many of the charming rooms. The gardens in the backyard were created by the previous owner and master gardener, Neil Mutschler. 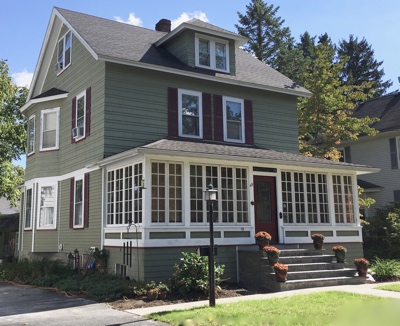 This home is a Colonial Revival built in the four-square form with a side gabled roof and hip roof front dormer. There is a 2-story bay window on the north side. The main windows are one over one double hung. It has an enclosed front porch with a center entrance. The door to the home has a large glass pane of stained-glass with an intricate design. The porch windows are tall and multi-paned. The porch has become an integral part of the house, serving as a dining room for many holiday gatherings.

The current owner grew up in this home and remembers when, in the 1960’s, the street was scheduled to be paved for the first time. There were mixed feelings about such a modernization to the neighborhood!

The wood shingle siding on 40 Dewey has exposures that alternate between short and long, creating an interesting texture to the home.

The original wood shingle siding remains on the home. Special care was taken to create a pattern with different shingle exposures. The rows alternate between an approximately 7’ and 2” giving the home a unique style and interesting texture. 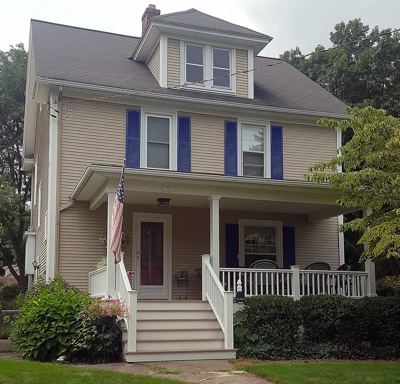 This home was built in 1913 in the popular Colonial Revival style in the four-square form. The current owners, who are native Fairporters, purchased it in 1965. It has side gables and a front dormer with a hip roof and a two-story north facing bay window.

Like so many other homes on Dewey, the wide front porch serves as living space for greeting the morning sun and waving hello to neighbors. The owner is a contractor and craftsman, and has made may updates to the home. In the front entryway there is a stained-glass window. 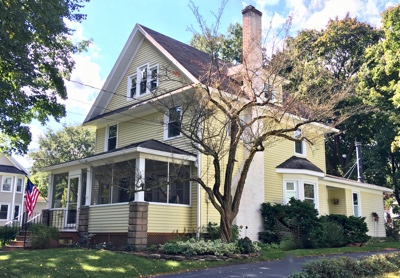 The owners of this property are longtime residents of Fairport, haveing lived in this house since 1967. They purchased the circa 1920 Colonial Revival from local dentist Dr. Welch. Ready to upsize from their apartment on Perrin Street, they purchased his house on Dewey, and Dr. Welch, who was ready to downsize, moved into their vacated apartment!

Their four-square form house differs from others on Dewey in that it has a pent roof across the width of the front between the 2nd and attic floors that forms a triangle. Above the pent roof is a group of three double-hung windows with a taller center window.

The home has a 1-story bay window on the north side, and there is a rectangular bay above the side entrance on the south that follows the interior staircase and landing. The south side bay continues to the attic level forming a dormer with a hip roof.

Groupings or ribbons of windows are very common in the Colonial Revival period homes. You would not find these or bay windows in an early Colonial home.

There is a full front porch that is screened in. Each pillar provides a spot for a different flag, from American to Malaysian to French. 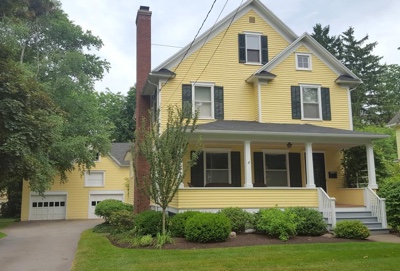 This eye-catching house and barn stand out on Dewey with their warm yellow color. A house on West Street in Fairport was the inspiration for this hue. This home was built circa 1912 and is also a Colonial Revival with a four-square form. It has been said that the builder of the house lived in a tent in the empty lot across the street during construction.

The home has a front facing gable that is stepped into 2 gables. It has a full open front porch and bay with a group of 3 small square windows on the north side. A rectangular bay above the side entrance on the south side follows the interior staircase and landing. The bay continues to the attic level, forming a dormer with a hip roof. Both levels have double hung windows. 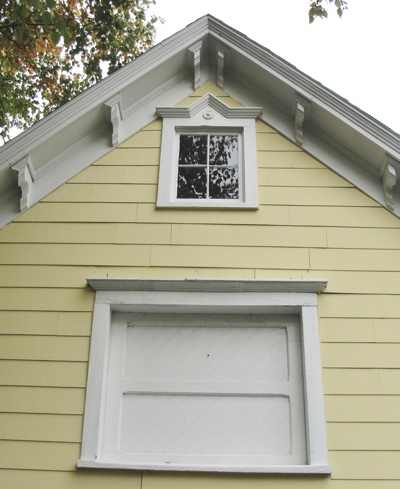 The barn is clearly older than the house and did not appear in this location prior to 1902. Unlike the garages or carriage barns in the Village, this is an early agriculture barn, and appears to be a Gothic Revival style that was common between 1840 and 1880. It has a steep roof, side gables, and a front center gable. There are decorative modillions under the eaves. The barn appears to have been moved to this location between 1915 and 1924, per the Sanborn Maps.

Where was the barn moved from?

Theory 1 - A large barn from the Nelson Lewis Farm, located at what is now the Faircroft Subdivision, was removed or torn down between 1902 and 1924.

Theory 3 – It seems obvious that the barn must have come from the Hawkins Farm where Dewey Avenue is today, but there was no barn indicated on the 1872 map, and by 1902 the land was subdivided into the Soane's Park Subdivision. 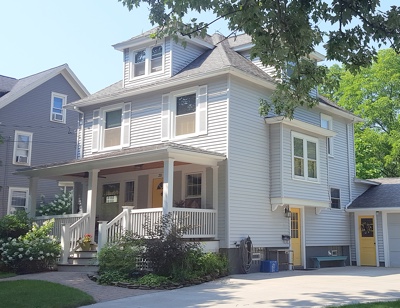 Three hip roof dormers contribute to the interesting lines of this Colonial Revival. It was built in the four-square form with a hip roof.

It is believed to have been built between 1905 and 1910. It has a full open front porch. There is a rectangular bay window above the side entrance with a group of two double-hung windows and corbel supports. The bay follows the interior staircase, and allows for a landing between the ground level and the second floor.

The current owners have owned the home, since 1980 and have remodeled and decorated their home while preserving its original charm. Newspaper records show that there have been at least 15 owners of this property since it was built.

A very special thank you to our homeowners for generously opening their homes for the 2018 tour. We also appreciate our docents who volunteer their time to show the homes and make this tour possible.

Why Dewey Avenue for the 38th Perinton Historical House Tour? Our special thanks to Jean Whitney for her suggestion to feature this street of many homes that are over 100 years old. An active PHS member and Dewey Avenue resident, Jean helped enlist other homeowners to take part in the tour, and contributed valuable information on the history of Dewey Avenue’s residents and architecture.

Why Dewey, and the History of Dewey Avenue, can be found in the October Historigram. 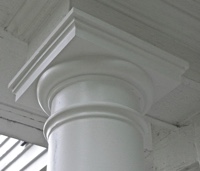 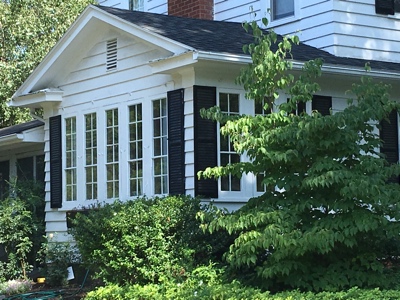 Notice how the pent roof of 80 Dewey continues to form part of the roof of the wing. 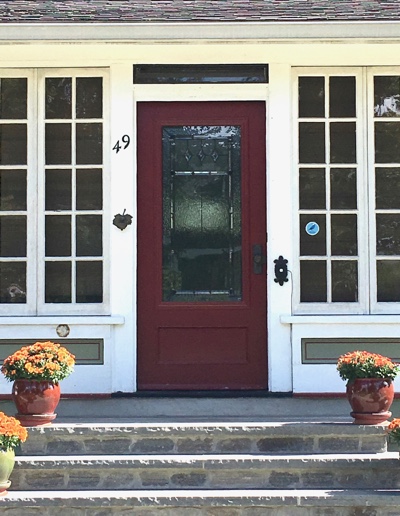 The door at 49 Dewey has a pane of stained-glass with an intricate design.

The shingle exposure on 49 Dewey alternates between 7’ and 2”.

38 Dewey has a pent roof across the front between the 2nd and attic floors. 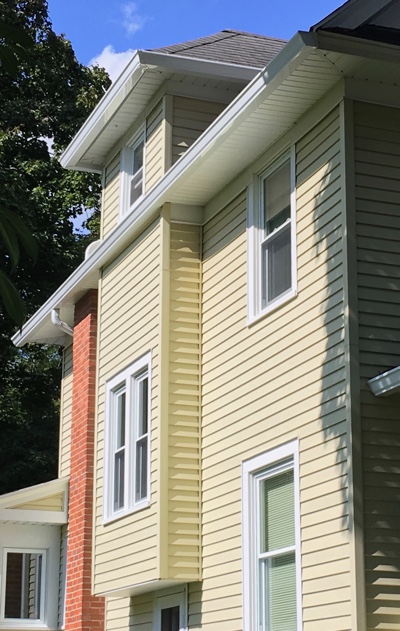 38 Dewey has a bay above the side entrance that allows space for the interior staircase and landing.

He was a native of Fairport and graduated from Fairport schools. He received his degree in dentistry from the University of Buffalo.

A history buff, Dr. Welch was greatly interested in village activities, and in 1976 had a book published, entitled Memories of Fairport. He was also a co-founder of the Fairport Little League Baseball.

He was a member of the American Dental Association, former curator of the museum located in the Crosman Center, and a member of the PHS. He was Past President of the Seventh District Dental Society, and the Rochester Dental Study Club. 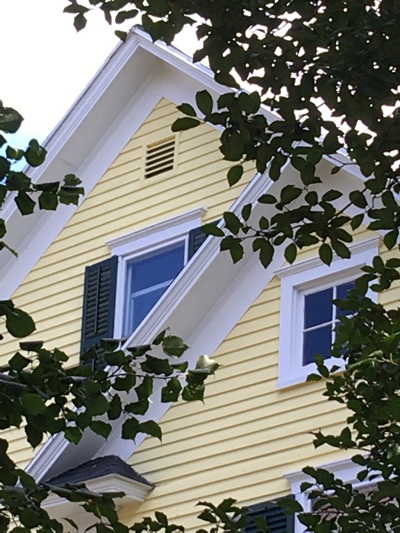 27 Dewey has a front facing gable that is stepped into 2 gables. 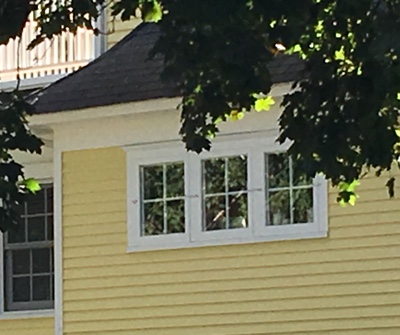 Colonial Revival homes like 27 Dewey often have groupings of windows. This feature and bay-windows would not be found on a early Colonial home.