Mr. Nelson Lewis of 128 West Church Street was a farmer and the original owner of a large parcel of farmland, part of which became the Faircroft Subdivision. The area of development encompasses a block of West Church, Fifth Avenue, Clifford Street, Galusha and part of Nelson.

Mr. Lewis probably had the land subdivided prior to his death in 1895, but this subdivision was not documented until 1902. At some point the land was sold to Mr. Galusha and also to a Mr John Clifford. Finally, it was sold to developers; Gowell and Yale Parce, who built many of the homes in this area.

While there is no documentation from architects and developers of the Faircroft Subdivision, they were undoubtedly inspired by the Roycroft Arts and Crafts Movement, founded by Elbert Hubbard in East Aurora, N.Y., some seventy miles west of Fairport.

In June of 1926, the first of Faircoft Subdivision homes was started. The post-Victorian years saw the emergence of American architecture such as the Colonial Revival, Tudor Revival and the Bungalow or Craftsman style. 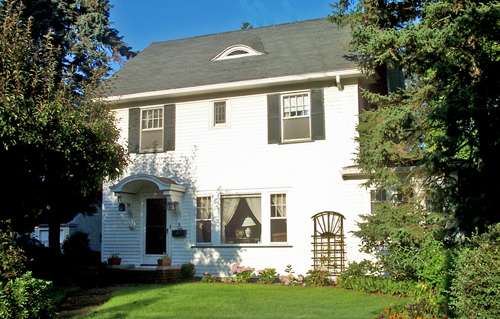 This Colonial Revival home was built in 1927, and was first owned by the Hubburd family. This home has several interesting Dutch Colonial Revival features, including two half-round fanlights and an eyebrow window in the attic, barrel-shaped roofline over the side and front doorways, and the floor plan with front entrance to the side.

Delightful curved arches of the porticos. held by corbels adorn both the front and side entrances. Attractive Craftsman style lanterns illustrating ships and lions flank the front entry.

The home boasts multiple Craftsman features: gumwood trim, built-in leaded-glass bookcases beside the fireplace, a trundle table and benches in the kitchen, six inch crown moldings, and six leaded-glass windows, two of which overlook the vaulted area of the kitchen.

The original kitchen with the built-in breakfast nook was expanded in 1996. The new space includes cherry cupboards and crown molding, a sky light and vaulted ceiling. The original built-in table and benches have been incorporated into the new kitchen. A new powder room with pedestal sink marries well with the medicine cabinet and deco lighting fixtures that are original to the home.

A new master bathroom with cherry cabinets and whirlpool bath was also added at this time. This room is light and bright because of a skylight and three leaded-glass windows, two of which open into the vaulted area of the kitchen space.

A small bedroom leads to a large attic room that features fanlights at either end and the smaller eyebrow window.

Off the kitchen and dining room, you can step out onto a stone patio and enjoy the pool and gardens of perennials, lilacs, azalea bushes, dogwood and apple trees. The original two-car garage on the Clifford side of the property has a Craftsman style light fixture and corbels under the eaves. 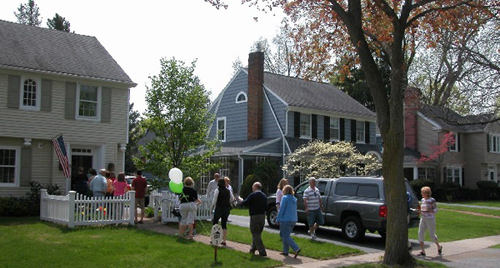 This is a fine example of how a properly integrated addition works and enhances the style of the original Colonial Revival type of home.

Note how the second floor extends beyond the front wall of the first floor and features several large decorative pendants. This style is very common to Dutch architecture.

The beautiful side lanterns and unusual upstairs Palladian-like window add to the detail and charm of this lovely village home.

Beautiful neutral colors, crisp landscaping and a welcoming picket fence and gate bid one to visit. Note the six-panel colonial door and the transom lights above the entry.

This home was built for Yale and Mabel Parce. The second owners were Charles and Emma Kenney, who bought the house in 1943. Charles, at that time, was Chief of Police for Fairport. Neighbors, Mr. and Mrs. Ernie Mouer and Mrs. Sauer, across the street, were original homeowners when the current residents purchased the house in 1973.

Instead of moving, the current residents made additions and capital improvements to their home. The first addition was the family room, and the second was a walk-in closet and bathroom off of the master bedroom. The owners tried to keep the original style of the house by having molding made that conformed to the original. Other changes made include: replacing the fireplace with a wood burning, then later, a gas stove, a pool, fencing, attic and wall insulation and a new kitchen.

This elegant French Eclectic style home is located at the corner of Fifth Avenue, and is easily appreciated from two sides.

The home has many exciting architectural features, beginning with the horizontal play between brick and stucco. Notice the simple beauty of the symmetry of the face of the house, the unusual five panels of windows, the flower box, the dramatic hipped roofline with copper ridging and the graceful barrel-arched overhang of the entrance.

Mr. Curran Mabry originally built the house in 1925. Mabry was a mason and homebuilder. He lived in East Rochester and built this home on speculation. Mabry’s craftsmanship as a mason is evident throughout the house. Most notable is the brick and stucco English Tudor or Manor style, something quite rare in Fairport. This similar style is also present in some of the houses he constructed in East Rochester. When the house did not sell during the Great Depression, he and his family moved into it themselves. It later passed to Curran’s son, who operated an insurance business from the home.

In 1999, a new kitchen and garage wing were added. It blends well with the original architecture in repeating the hipped roof and stucco elements. The original structure and interior remain essentially intact. 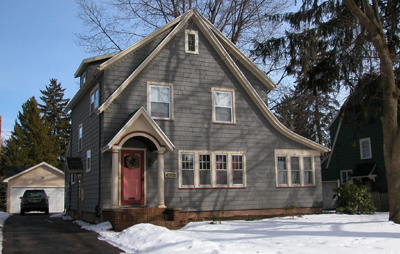 This house is considered to be a Tudor Revival. It is a house of peaks, with a roofline and eaves alive with upward energy, even to the thin vertical attic window. See the dentil-like shingle work used as a design element and the shed attic dormer. Columns hold a striking arched canopy over the entrance.

The current resident made several renovations to the home. The kitchen and half bath were replaced, the floors were refinished, cracked plaster was repaired and painted from the ceiling to the floorboards. The roof was replaced, the attic finished, the garage restored, and the gardens expanded.

This home also comes with a ghost story: the doorbell would ring, the lights would flicker, and the homeowner could see a shadowy outline when woken from a dead sleep. The homeowner spoke with neighbors, who shared some insights about the former residents. The homeowner contacted a woman who was gifted in "house cleansing", and this mystic informed the owner that two previous residents were clinging to the house. One left quietly, the other took several cleansings to be ousted. How haunting! 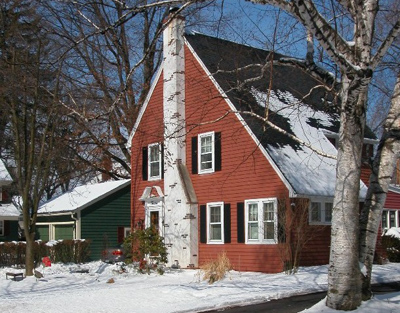 This Tudor Revival seems to include a saltbox-like roofline with a three-story slope on the right. The entrance is offset and framed with wide colonial type trim. Note too the dramatic traditional pediment over the entrance. The centrally located chimney is unusual with its stucco and brick design, giving it a cottage look. The crisp contrast of colors adds drama to the simple design of the face of this home.

The kitchen has been renovated and the basement turned from a family room into a basement again. 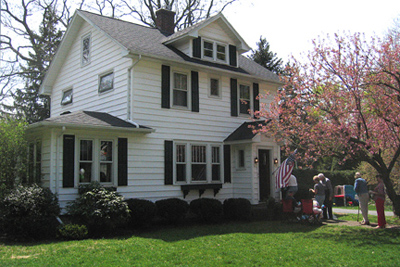 This is a classic example of a Colonial Revival with a side facing porch and a large front dormer. During the period of the 1920s and 1930s, white was the dominant and preferred color. Perhaps this home has always been white.

Take note of the slightly protruding entryway and the flower boxes.

A neighbor provided the house's history. The first owner of this house was Thomas G. Coffee, the superintendent of Fairport Schools. He had the house built in 1926.

The house has many of its original features still intact, such as the windows, floors, gumwood trim, fireplace, leaded-glass windows, built-in corner cabinet and tile. The second floor has a laundry chute.

There were two hidden features in the house. One is a step with a hidden storage compartment, and the other is the tile pattern of the fireplace hearth. The tile was painted white when the current residents moved in. The paint has since been removed to display the original tile! The previous owner had left behind two books from 1926.

Some modifications have been made to the home. The 1950s style kitchen was gutted, leaving only the custom built cabinet structure. The cabinet doors were rebuilt and do not have an Arts & Crafts look to them. The layers of floors were removed to reveal the original subfloor. It was sanded and refinished. A new Arts & Crafts cabinet was built across from the side entrance, which features antique stained-glass windows as cabinet doors. All the new trim was installed to mimic the original trim style in the rest of the house. Old-fashioned soapstone was implemented for countertops.

The finished basement floor was pine and was rotting and moldy. It was gutted down to the studs, sanitized and refinished. The basement now has a more modern look, but the style of the house was maintained, with wainscoting on the ceiling and wider trim like the rest of the house. The basement stairs were rebuilt and still include the "hidden" compartment. A section of the basement had a dirt floor. Cement flooring was poured.

All the floors were refinished and the walls painted. The master bedroom closet was converted from one door to French doors, so there was access to the entire closet. A matching gumwood door was found at a local house parts store.

An interesting feature unique to this home is picture molding on the first floor. Also, instead of an open staircase, this one is closed-in with a leaded-glass pocket door.

Over 250 people enjoyed the Faircroft tour. 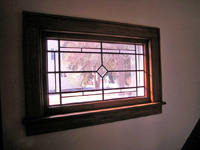 Gumwood trim & leaded-glass windows are common features of this era.

The original table and benches were incorporated in the new kitchen of 8 Fifth Avenue. 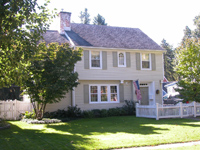 At 3 Galusha,  the second floor extends over the first.