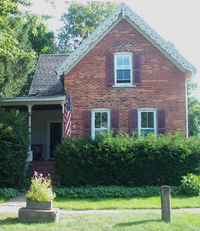 The tour took us to a number of historic homes on Roselawn Avenue and Cole Street in Fairport. As we celebrated the 100th year anniversary of Fairport's Lift Bridge, we thought it only fitting to showcase some canal side. Homes constructed in the late 1800s and early 1900s.

Examples of homes on the tour are 53 Roselawn a Gothic Cottage pictured on the left, and 132 Roselawn, a Queen Anne style home shown below, 84 Roselawn, a Gothic Revival and 1 Cole Street. Also on the tour was the Sunflower Canal Boat and a demonstration of soapmaking at the Museum. 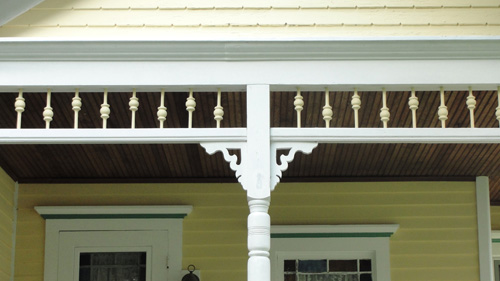 The Sunflower is the largest English narrow canal boat available for charter on the Erie Canal. This “packet-style” boat has been owned and operated since 2009 by Robin Ward and Gary Ezell through Low Bridge Charters from its home port of Fairport. She was docked on the canal on the west side of the lift bridge. The house tour ticket will let us see how present-day adventurers can travel the canal in compact yet comfortable surroundings (no mules required).

Mooseberry Soap Company helped us celebrate with a soapmaking demonstration at the Fairport Historical Museum. Their organic soap was on display and available for purchase. What’s the connection? Fairport once had its own soap company in the triangular-shaped building at 20 Roselawn Ave. It was named KOD, for Knocks Out Dirt. This company was known throughout the United States for its quality product.

The house tour was open only to members of the Perinton Historical Society, who received their tickets in the mail. Friends and family members who want to attend our tours will need to become members of the Society.

Membership forms are available in PDF format for downloading, and at the Fairport Historical Museum on Perrin Street.

53 Roselawn Avenue
One of few houses in this style in Perinton, this Gothic Cottage home shown above was constructed in 1876 by George S. Filkins. The lace-adorned bargeboards on its facade were built to protect the brick from rain.

In the late 1800s, it was home to Fanny Silver and her husband, Harvey, who worked as an undertaker. Calling hours were held in the front parlor accessed from the front porch. He built the carriage barn in 1895, allowing for horses to occupy the lower portion, and the upstairs to be used for embalming. You can see the outline on the front of the barn where the previous barn door was cut high to accommodate entry of a hearse.

Inside, the wide floor planks throughout are original tongue and groove chestnut. The rear of the house on the left is a wing that housed a summer kitchen – a separated area with the cooking facilities used to process the season’s produce. The back portion of the house was initially a porch. In 2001, the roofline was altered so that the back room could be extended and enclosed to create a bright, yet private living area.

Part of the front wraparound porch has been enclosed to create a small room facing east. The upstairs contains two small bedrooms. A compact bathroom at the top of the stairs was once a nursery. 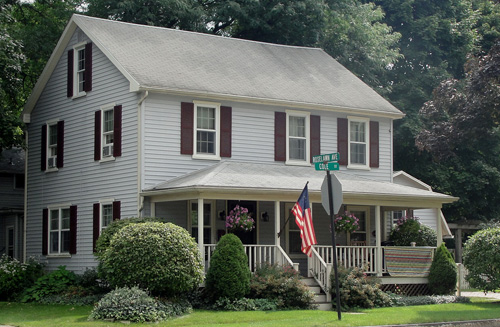 This house features side-facing gables and a full front porch with an off-center door. According to an 1872 map, this was the first house built on Cole Street, which was named after Amos R. Cole. Amos, born in 1806, was a wool buyer who owned and developed acreage between what is now West Avenue and Roselawn Avenue.

Darius Talman and his wife Cynthia, after raising twelve children in another home in the area, resided at 1 Cole Street until their deaths in 1878 and 1884.

The front room was originally a porch. Updated flooring leading to the parlor begins where the square nail heads change to round nail heads. Wide gumwood adorns the interior doorways and an opening to the dining room.

A modern kitchen houses the bones of original cabinetry and leads you to a back room addition with a powder room. To maintain the house as original as possible, the owners have made numerous trips to a home restoration store, purchasing hardware and interior doors.

There is an unusual red brick driveway. In 2014, the current owner rescued brick from a road in Batavia that was being replaced. 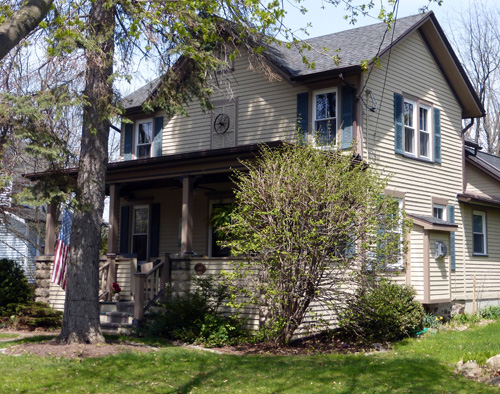 This home with its center gable is an example of Gothic Revival or Gothic Cottage architecture. It is a symmetrical house with a prominent center gable. The plane of the gable is the same as the front wall. The one-story front porch is supported with concrete blocks.

Most homes designed in this style were built between 1840 and 1880. This home appears to be a later example. Records show that it was built in 1900 and originally on the canal. The property between the house and the canal was developed, and like so many houses of this era, it started out very small and was added on to accommodate family needs.

In 2005, the first floor bedroom was added, as well as a two-car garage. A 1902 Sanborn map shows the downstairs of the original home as two rooms – a living room and parlor with a small kitchen in the rear. 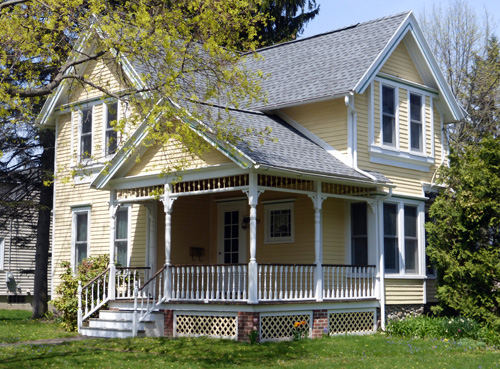 This house is a beautiful example of the Queen Anne style, with its spindlework (gingerbread) ornamentation. Notice the detail in the porch balustrades, bracket trim and the frieze suspended from the porch ceiling with knob-like beads.

Construction was completed in 1903; it was originally Lot 31 of the Lewis Farm subdivision. The width of the property is 3 chains, or 99’ wide (a chain being 33 feet).

In a Landmark Society Survey of 1976, it was noted that the gables retained their original boards, porch brackets and spindles. The front door has its original stained glass and unique twisting doorbell mounted in the center.

There is a mantle and fireplace surround, carved from local black walnut wood. The music room is the other front facing room, one of the original three rooms on the main level of the house. At the rear of the house, there is original narrow oak strip flooring. A large kitchen underwent a substantial facelift in 2003. Doors became windows, and an island was added that incorporates rosettes – to match the original rosette on the doorframes. The back porch has been enclosed. In 1997, an old barn structure (carriage house) was removed to enable canal viewing.

In 1992, the Sunflower was built by Mid-Lakes Navigation in the hamlet of Borodino, south of Skaneateles Lake. She was the only Lockmaster 44 that they built, making her the largest overnight accommodation on the canal.

Since 2009, Robin Ward and Gary Ezell have owned and operated the Sunflower through Low Bridge Charters from its home port of Fairport. Tour goers enjoyed a taste of life on the canal, as they toured stem to stern through the galley, dining alcove, and accommodations above and below deck.

Mary Bartolotta, of Mooseberry Soap Company & Cafe, showed the art of soapmaking with demonstrations at the Museum. Her organic soaps were on sale with 5% of the proceeds going to the Museum.

An exhibit on KOD (Knocks Out Dirt) Soap Company, formerly located at 20 Roselawn, then North Street, whose quality product once attracted customers from around the country was on display.

A very special thank you to our homeowners for generously opening their homes for the 2014 tour and to all volunteers who help make this event a success.

Instructions for 2014 tour were:

Ticket:
Have your ticket with you when you attend the tour. Additional tickets can be purchased at the Museum during normal open hours or on tour day, 1 p.m. to 5 p.m.

Location:
This year’s tour takes us just a short distance from the Lift Bridge to four inviting homes in the Roselawn Avenue & Cole Street neighborhood near the canal.

House Identification:
The houses on the tour are marked with a numbered PHS sign on the front lawn. You may visit in any order. You will need to take off your shoes as you enter each home (booties will be provided if you aren’t wearing socks). We certainly hope for pleasant fall weather, but dress accordingly; if there is rain, please leave your umbrella on the porch.

Parking:
Kindly respect the street signs and rules for parking on the streets, or use the village public parking lots, and be careful of traffic. Roselawn Avenue and Cole Street are just a short walk from the Fairport Village Landing parking lot (across from the museum).

Pictures:
No pictures are allowed inside any of the homes. 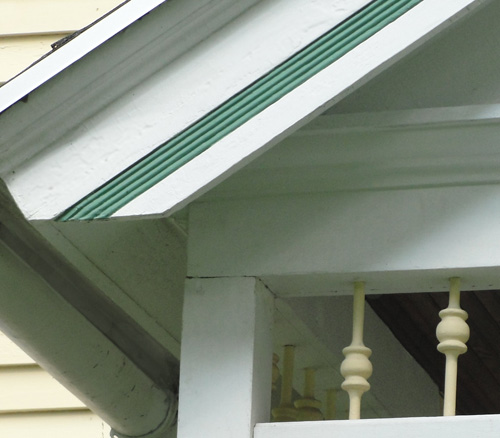 Shown here are the fluted band on vergeboard and the detail from the porch frieze band at 132 Roselawn Avenue. 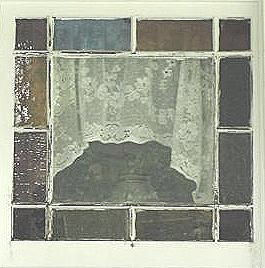 A perfect example of a Queen Anne style window at 132 Roselawn Avenue with center pane and a smaller panes around it. In this case, the smaller panes are of colored glass. 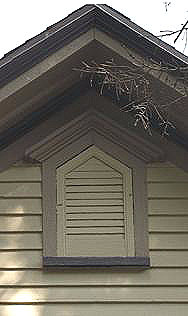 84 Roselawn is a symmetrical house with a prominent center gable. The plane of the gable is the same as the front wall. The gable has a center window and a pointed-arch shaped window in the peak. 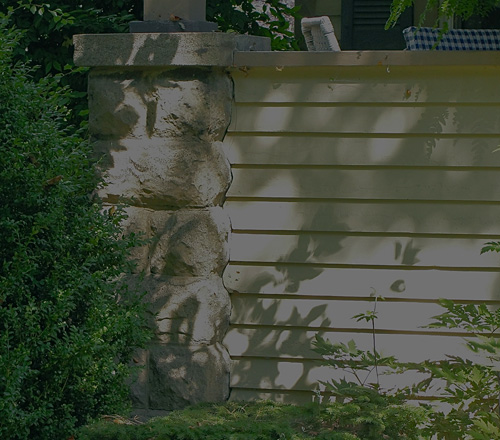 The one-story front porch is typical of a Gothic Revival style home. The porch is supported by concrete blocks which are cast with a face imitating rock-faced ashlar stone.