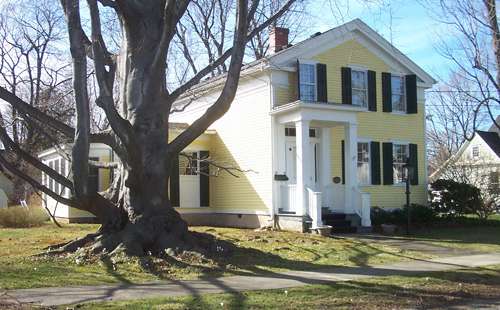 Built in 1851, this is the oldest house on West Street. It is known as the Martin Wood House. The rare Copper Beach tree in the front yard may be over 200 years old.

Martin Wood was a farmer who owned six acres called Woodland Farm, with most of the land located just to the west of the house.

Woodland Street, later Woodlawn Ave., just west of West Street was named after the farm. Martin died in 1890 at the age of 82. Dorothy Cook bought the house in 1954; and the current owner purchased it over 25 years ago. The current owner has restored the home, including removing all the layers of paint to expose the original color on the clapboards.

Two additions have been sensitively accomplished, including raising the low attic roof to a full room height for a needed large bedroom and re-allocating the side-screened porch. Carl Schmidt, a local architecture historian and author, includes this Greek Revival cottage in his book Greek Revival Architecture in the Rochester Area. In 1976, a researcher for the Landmark Society of Western New York described this house as the best example of Greek Revival architecture in Fairport. This house was designated a local landmark in 2009 by the Fairport Historic Preservation Commission.

24 West Street is a small and charming Greek Revival home that was once a part of the Martin Wood land parcel. It was sold as a building lot circa 1850-1860. At that time, there was no village of Fairport, only the Town of Perinton.

The house features a classic pillared entrance doorway and a corniced upper window insert typical of the balance and symmetry achieved in the Greek Revival style.

In 1946, a great deal of restoration was undertaken, and a fireplace was added. Also added was an unusual tiger maple banister in the entry hall. 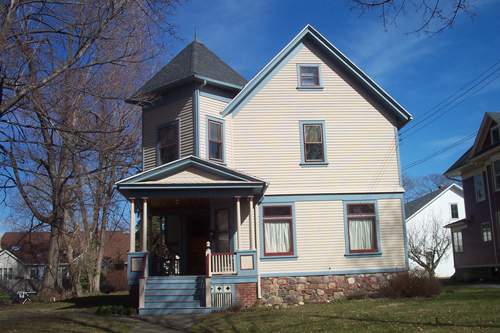 This home is a Queen Anne style. Village records date this house at 1902, but it may date to the late 1800s. It was built by C.F. Parmalee, and cuts a unique profile with its diagonal square tower. Editor's Note - Recent research credits William B. Bly as the builder of this home for C. F. Parmalee in 1895. See the William B. Bly house for more.

From the 1930s to 1977, it was the home of Bessie Kinney. Bessie was the principal at the Midvale School just down the road on Baird Road in the town of Perinton.

The current owner has worked diligently over the years to preserve this very unusually designed home. At one point, the foundation had been compromised, and the turret had begun to pull away from the walls of the house; once those structural repairs were completed, other exterior and interior work began.

The original front porch rails had once been replaced with inappropriate wrought iron. The front steps and rails were restored to an original look, as was the rear porch. Five years ago, the exterior colors were changed. All of the interior woodwork was stripped and refinished. The attic was converted to a studio; the current resident is a writer and illustrator. A previous owner replaced a rear staircase that met the front staircase at the landing, with a small powder room. Significant plaster repairs have been completed. Note the narrow floorboards on the second floor and the wide hallway. Future plans include relandscaping the yard.  The property also has a large carriage barn. 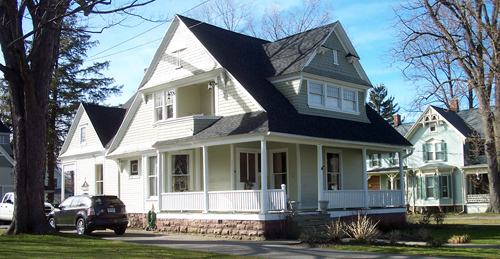 This home is a fine example of an original American style of architecture, the Shingle Style Cottage.

Built by Joseph Duncan, it was part of the Martin Wood subdivision. Records date it at 1902, but it is more likely vintage 1875-1880, as its front door and interior woodwork and design are resident in other village homes of that era.

It has a spacious double lot, a unique roofline, a beautiful small-scale carriage house, a grand front porch and numerous smaller porches, just as a waterfront cottage would have.

The new “old fence” in the side yard was saved from an 1864 property, and artfully reconfigured to its new design. Take careful note of the replica carriage house post lanterns also designed and crafted by the owner. Current residents restored further with new exterior paint, a new roof, fabulous gardens and a stripped and refinished the front door with the original bell. Inside, the stripping of paint and refinishing of all woodwork continued. Note the unusual double pocket doors. A new “coal” gas unit lives in perfect architectural harmony with the original fireplace mantel. Extensive changes have been made to all second-floor rooms. Future projects include a kitchen and pantry redesign. 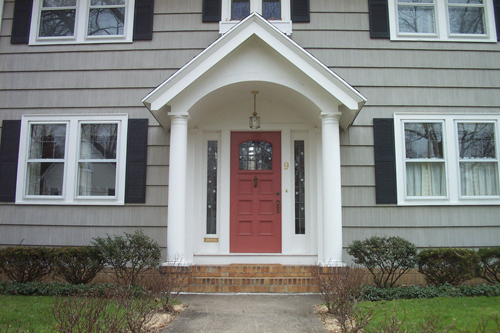 John Bahler and his wife Bertha originally built this home in the Colonial Revival style in 1921. Previously, they had rented the upstairs of 11 West Street.

He owned a hardware store on West Avenue called Schummers Hardware, which he purchased in 1919. The sign from the store is on display at the Fairport Historical Museum.

Originally built with a gray stucco exterior, the house was faced with cedar shakes at some point in the 1980s. Baths and kitchens have been updated. Nearly all the doors, walls, windows, woodwork, and hardware are original. Only one major modification to the original structure was completed by extending the room behind the living room to create a den. Painting, wallpapering and minor bathroom refurbishing have taken place under the current owners.

This home is typical of smaller village homes with a shortened second story. This property and it’s neighbor at 20, were part of the Wilcox property. Mortimer Wilcox was the Fairport Postmaster, and ran a country store from 1871 to 1885. He had a house on West Church Street adjacent to the property on West Street. This home may have been built between 1840 and 1860.

The current owners purchased it in 2000. They removed a wall, and opened up the kitchen and dining rooms. Note the wooden ceiling. On display were older photos of the house, and interesting items found in the walls during demolition. Future plans include a second floor renovation. 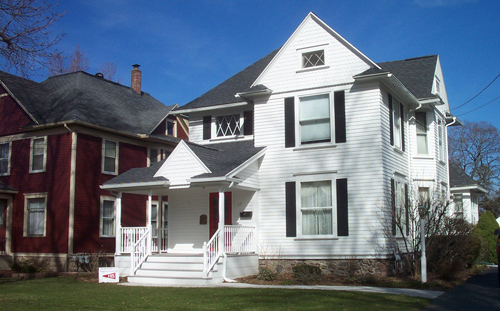 The home is estimated by the assessment records as being built around 1910. It has 3,000 square feet, two staircases, and occupies a half-acre of land. From the 1920s to 1973, Irving and Nina Bramer owned the house. Irving was a druggist, and ran Bramer’s Drug Store from many years at 2 South Main Street near the canal. The current residents bought the house in the fall of 1981. As far as anyone knows, the house has always been painted white.

Modifications have evolved over the years, beginning with the removal of carpet to expose hardwoods, and a new roof and gutters. New mechanics and new baths were completed. The front porch has seen two replacements. This last one in 2006 blends perfectly with the period architecture, and creates a larger sitting porch which never needs to be painted. Two additions have added a family room, and a sunroom, and patio. All windows are original to the house. New landscaping and a fire pit add to the outdoor charm of this impressive residence. 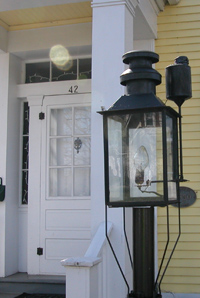 Lantern in front of 42 West Street 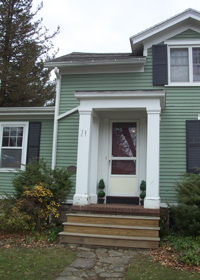 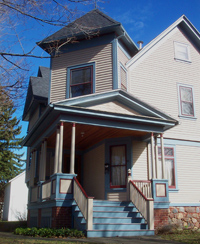 The carriage step on the tree lawn area, which is inscribed "Duncan" was desginated a landmark by the Fairport Historic Preservation Commission in 2011.

Recent reseach (2016) on 36 West Street indicates that Austin R. Conant built this "cottage". He bought the land from Martin Wood in 1886, and the house was completed in 1887. The architect was Will Barnes and the contractor was Edward Marshall. This information came from Fairport Herald articles dated August 20, 1886 and October 22, 1886.