William Matthews (1925 to 2003) Perinton Historical Society member was responsible for many of the building preservation projects undertaken by the Society. Bill was a member of the Matthews family, owners of the Matthews Building Movers, which has been in the house moving business since 1867.

The company was honored in 2002 by the Landmark Society of Western New York for their unique commitment of time and talent to the preservation of historic architecture in western New York.

His interest in old buildings and his association with the moving company made the preservation and relocation of the outhouse, trolley stop and switch station possible. These unique and interesting structures are now located in the Village of Fairport.

In 1999 Arnold and Anne Smeenk donated a brick outhouse from their property to the Society. 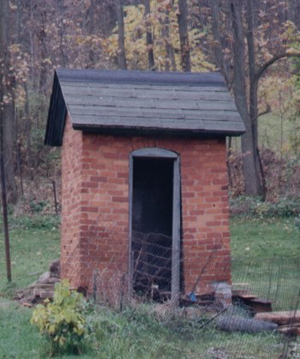 The 1924 Sanborn map shows a stone outhouse standing behind a house at 76 East Church Street. The house no longer stands but the outhouse remained and became a garden shed for the Smeenks. This “three holer” outhouse is somewhat rare. Many outhouses were made of wood and have not survived into the 21st century.

The trolley waiting station at stop number 22 was found in the back yard of a house on Wilson Road in Wayne County by Bill Matthews. He made a deal with the owner and replaced the building with a brand new shed.

Matthews Building Movers moved the octagonal waiting station in 2001 to a small hill overlooking the Erie Canal. It was restored by Bill Matthews and now sits on a concrete slab and serves as the dock master's office for leisure boats docking in the Village of Fairport.

The dock master’s office is on the southeast side of the canal located between South Main Street and Parker Street.

This “signal tower" or "switch tower", also known as an "interlocking tower" was built in 1900.

The purpose of an interlocking tower was to provide for efficient and safe passage across "at grade" rail junctions where different companies owned rails. Switching gears and mechanisms were installed on the second floor where a railroad employee could spot an oncoming train coming down the tracks and pull the proper lever to switch the train to the appropriate track.

In 1956 the tower was brought in from the New York Central Railroad yard south of Batavia and installed in Fairport. In 1964 the building was purchased by Charles Kopp and moved to his marina on the Erie Canal.

It was donated to the Fairport Industrial Development Agency in 1995 and was moved to its present site on the northwest side of the canal on West Lift Bridge Lane in 1996. It was restored by the Matthews brothers and is now a canoe rental office.

There aren’t many people who would think that restoring an old brick outhouse was the way to spend one’s lazy summer days, but the truth is that I’ve looked forward to doing just that ever since this little artifact was moved to the rear of Potter Memorial last November.

Next came the replacement of about two dozen bricks that had eroded over the past hundred years or so. Again, the new bricks were also old, saved from some former life.

Plastering the interior walls to replace the areas where the original had come off is almost finished, and some woodwork and then hanging of the old door will follow that. Then there is interior painting and the re-installation of the three-hole bench.

Grading and landscaping are also on the agenda for fall. Will it all be done by November 6th, the anniversary of the building’s move to Potter Memorial? Stay tuned, or better yet, stop around some day and see for yourself!

Observations from the Outhouse
by Bill Matthews, Project Manager

The restored trolley stop is now located on the southeast side of the canal, between South Main St. and Parker St.

You can find this building on West Lift Bridge Lane which is on the north side of the canal.