As the century aged, house styles swung back to high-styled architect designed homes, albeit in a much different shape. Contemporary was a favored style from about 1945 to 1965 as a natural outgrowth of the ranch house and Wright’s Usonian concept (with its open interior space, window walls, and outdoor space seen through balconies and porches). Then it faded for a number of reasons – mostly because it was too avant-garde for most buyers, bankers, and developers. It was primarily an architectural exercise, and did not catch on as a popular American home. 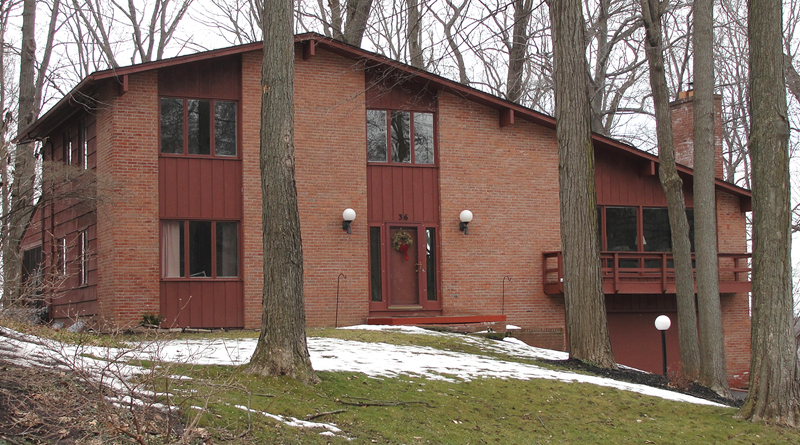 Earlier in the century, housing designs emphasized the external decorative details that could be placed on doors, windows and walls. The Contemporary style focused on the interior space and the use of it to get to the outdoor view.

This example is at  36 Clarks Crossing.

Building innovations of the 1930s enabled this trek to the outdoors: thick plate glass, the development of exterior grade plywood in eight foot lengths and new glues. The designs moved the focus from the interior, which could still be a limited space, and expanded it to include the outside. This was done using enclosed courtyards, or establishing gardens and ponds for the specific purpose of being viewed from the interior of the home. Many of the features developed for the ranch house, particularly the eight foot. ceilings, carried over to contemporary.

42 Briggs Avenue has a carport under the low-pitched gable roof with deep overhanging eaves.

It was built in 1958 for Robert W. Murdock. It was a part of the Fairport Meadows Subdivision owned by Domenic Prinzivalli in 1927.

The style was adaptable to steep hillsides where the ranch was not, although the split-level and raised ranch tried. In addition, the house could be a two-story, as well as a one-story, and require a smaller footprint. This is also the first we see of the carport: a sheltered area for storing the automobile and often a hidden entrance to the home. The fireplaces were heavy masonry, and as seen in the ranch style, were kept long and low.

At left is the Voplex Corporation building designed by local architect Carlton "Bud" DeWolff in 1970.

It is located in Perinton at 1100 Pittsford/Victor Rd.

For more information see the article on the right.

A low-pitched gable roof with deep overhanging eaves and a broad uninterrupted wall space across the front facade. The focus was on natural materials: wood, stone, brick and sometimes concrete block.

Most common is the simple front-gabled form that enabled the high placed gable end windows in the interior vaulted ceiling. There are two variations: a broad one-story form with a low-pitched roof, and an asymmetrical gable front found most often on split-level homes. Flat roofs are not uncommon, and the slant roof was popular. Exposed rafters or rafter ends were another popular detail.

Window walls were the outstanding feature of these homes, and appear as entire or partial walls throughout the home.

Entrances are simple and deeply recessed - often hidden either through the carport or through a garden. Decorative grilles or screening fences were used to hide the carport or the entryway from the street view. 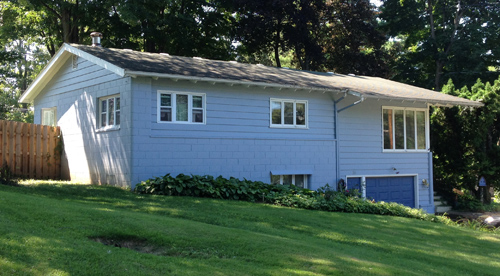 33 James Street is an example of a two-story comtempory with deep overhanging eaves and exposed rafters, and a window grouping of large floor to ceiling windows. This two-story home with a ground level garage is built with concrete blocks and shingles.

This property was a part of the Streppa Tract. It was built in 1957 for math teacher, Neil P. Maxom and his wife.

(A note from the architect)

The Voplex Corporation building has garnered many awards and when first built viewers thought it was designed by a  Toronto architect. But actually I (Carlton "Bud" DeWolff ) was born and raised in Fairport and finally returned after serving in the Korean War.

My practice (DeWolff Partnership Architects) is in Rochester, N.Y., having designed some notable structures such as the world class Museum of Film and Photography Archive Expansion. The Blue Cross War Memorial and one of my favorites the Andrew Wolfe residence on Mitchell Road (Pittsford, NY)

The Voplex building was one of the first structures to utilize insulated glass in the North East. The design was also one of the first to employ solar shade shielding by building 6 foot deep indented windows, thus reducing energy costs back before the building codes required energy saving methods.

One interesting note, is that the building contains 25,000 square feet and yet there are virtually no major corridors except very short ones to access bathrooms and interconnections between offices.

At night when the canopy lights are on many viewers commented that it looks like a space ship taking off.

Editors note: Bud DeWolff also designed the Perinton Community and Aquatic Center which is featured on our Shed Style page.