During the 1920s, probably as a result of America's involvement in the war, photographic studies of simple French homes became very popular in this country. These studies provided architects with direct models for homeowners who wished to imitate this European style. Alsp, Americans who served in World War I were familiar with the simple French country houses they saw there.

It is an uncommon suburban house style, but can be found in Eclectic housing developments of the 1920s and 1930s.

Because of the similarity of building materials shared with their Medieval English Tudor cousins: half-timbering, slate, tile, thatched and steeply pitched roofs - these eclectic styles often overlap each other.

Presently, like Tudor before it, French Eclectic is enjoying a revival (Neo-French) in the United States. Out of fashion after the 1940s, it has once again become a popular but diminished house style. 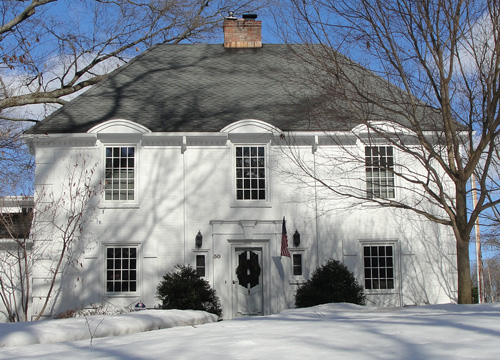 French domestic architecture is greatly varied in form and detailing, except for the great hipped-roof. These house forms can be balanced, unbalanced or towered. Asymmetrical (unbalanced) is the most common house form, followed by the towered version.

This home is at 50 Woodward Drive in the Forest Hills area of Perinton. It has a massive hipped roof with the ridge parallel to the front of the house, center entrance and through-the-cornice wall dormers.

The most outstanding feature of this style is the tall steeply pitched hipped roof often flared upward at the eaves. Front-facing gables won't be seen in this style, but decorative half-timbering along with brick, stone or stucco wall details will be present. Dormers are not uncommon, and can be arched, hipped or gabled.

Windows are doubl- hung or casement style, and are paired or tripled, sometimes with small leaded panes. Often, the upper windows have through-the-cornice wall dormer windows.

As in the Tudor style, doorways may be surrounded by stone quoins or other Renaissance details, using pilasters and pediments. The doors themselves can be board and batten, or a more formal paneled variety reminiscent of earlier Georgian details. In the towered version, the primary doorway is usually located in the tower.

19 Ridgeview Drive was built in 1938. It has a prominent round tower with the high conical roof that houses the main doorway.

46 Westwood is an outstanding example of this style. The doorway into the tower is a key feature. This home has a hipped roof and two dominant front gables.

12 Regency in the Forest Hills development is very similar to the home on Westwood Drive, shown to the left, with casement windows, hipped roof, and through-the-cornice wall dormers. The center entrance and the bay window on the right have a flared roof.

Additional French Eclectic style homes can be found in the Forest Hills area of Perinton. For a history of Forest Hills.