Most homes of this style are relatively small one-story or one and a half-story homes. These houses were built in great numbers after the Depression of the 1930s and immediately proceeding WWII. There are many of this style in the Fairport area. 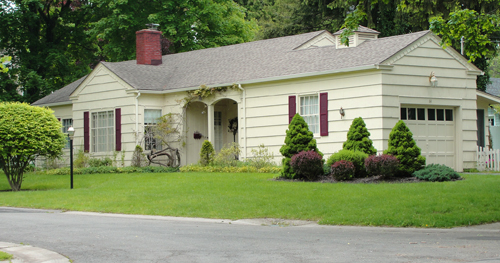 The Gilded Age had disappeared and along with it the highly styled architectural homes of the late nineteenth and early twentith century. The country had experienced the First World War and was in the midst of the Great Depression.

This home is at 64 Dewey Avenue is at the corner of Sampson Street.

The creation of the Federal Housing Authority (FHA) in 1934 would have a profound influence on home design for many years to come. The FHA was chartered to stem the tide of home losses and plummeting property values, as collapsed banks called in mortgages on property that was valueless.

The FHA house building requirements limited the maximum sales price in order to keep the market open to all buyers. To keep costs down it limited the size of the house. This in turn led to an efficient design for the rooms and storage space. All of the non-essential forms were omitted and architects were directed to focus on scale. The FHA even provided publications to architects that showed them how to keep the design simple but useful. Simple was the key phrase. The basic floor plan for these homes consisted of a living room and dining area, kitchen, bath, one or two bedrooms, with or without an attached garage. 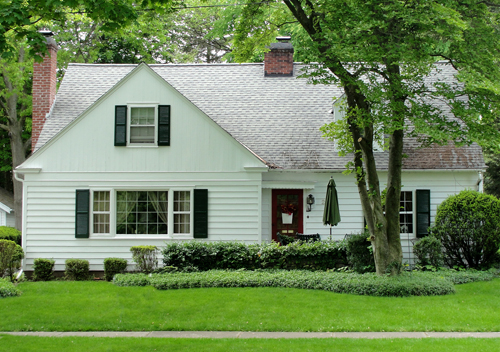 These late 1940s developments were necessary to begin to fulfill the wartime GI Bill promise that every returning serviceman would be able to purchase a home.” * Levittown, New York is one of the better known examples of such housing developments. Minimal Traditional was a house style seen all over the United States both as a single build and as a tract home.

The development of this house style was an unprecedented coming together of public organizations and private interests to meet the critical need for a single family home during a period of great economic distress.

A small, asymmetrical, one-story house with a low or medium pitched roof (sometimes hipped), showing front or side gables with little or no overhang on the eaves, seldom dormers and a minimum of architectural detail throughout. Simple double-hung windows, possibly corner wrapped; picture windows on later builds. Perhaps a small, covered off-set porch. Cladding is most commonly wooden clapboard, but brick or stone combinations are seen. The predominant characteristic of this form is the front-facing gable; either as a small wing, an entry detail, or a decorative element.

The Cape Cod, another popular form of the style, is a little different. It has the same massed structure; side-gabled but symmetrical, and often using Colonial Revival motifs such as a paneled front door, multi-paned windows and shutters. However, both forms can share these style details. 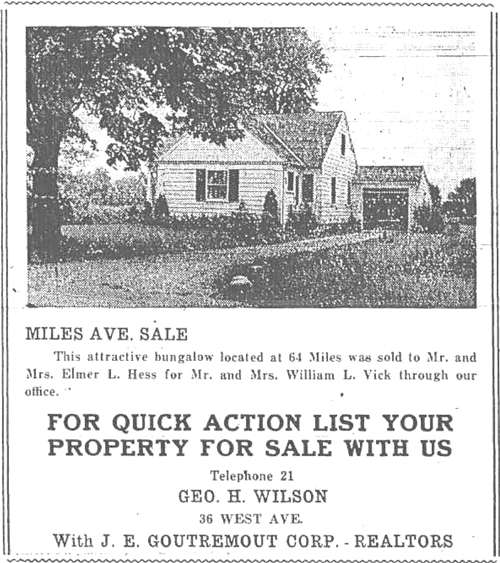 In a 1944 issue of The Herald Mail, Geo. H. Wilson promoted his business by featuring 64 Miles Avenue. The advertisment states, "For Quick Action, List Your Property with Us".

This home at 14 Hulburt Avenue has all original wood cedar siding and windows. It was built 1955-56 with an unattached garage. The Robert N. Thurman family owned the home for over 40 years.

Often homes of this style had an attached garage added on at a later date. This house is at 64 Briggs Avenue.