Slipping into and alongside the predominant styles of the early 20th century, was Modernistic. It consisted of two forms: Art Deco, a popular style for commercial and public buildings during the 1920s and 30s, but extremely rare in domestic housing; and Art Moderne, which became the predominate modernistic domestic form. It was not a house style seen in every neighborhood, but popular enough that examples are scattered throughout the country. 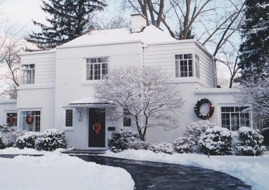 It began in 1922 when a young Finnish architect, Eliel Saarinen submitted a contest design for the Chicago Tribune headquarters building in Chicago. He did not win the commission, but the innovative style of his design was widely publicized and quickly gained favor as the latest in modern building schemes.

The house at 13 Regency Drive shares several characteristics of both modernistic and international styles.

Additionally, in the early 1930s the industrial world began to streamline their designs for ships, planes, and automobiles which in turn emphasized and enhanced the smooth curved corners of the modernistic platform. Each style had a different emphasis: Moderne, the horizontal; Art Deco, the vertical zigzag. Both were used in combination with the other, and both styles looked not to the past for inspiration but to the future. Further, the Art Deco movement inspired decorations that were applied to jewelry, clothing, furniture and household goods.

We cannot leave this period without mentioning the International Style, also popular during the early 20th century. It was concerned more with the building of skyscrapers and modern office buildings than with domestic architecture and relatively rare for homes. However, it shares some characteristics with the other two and shuns others.

During this period between the world wars, American domestic architecture looked to build period houses that reflected our past traditions. But Frank Lloyd Wright had inspired European architects with his progressive design theories. Architects like Le Corbusier, van der Rohe, Gropius and Breurer would eventually form the International Style, a far more avant garde style than either of the two modernistic styles developed in the United States.

International Style was meant to convey functionalism, meaning that everything within and without the structure was designed to serve its inhabitants - decorative elements were to be discarded. This functionalism idea would greatly influence American domestic architecture for decades.

The style advocated plain wall surfaces, often stucco, with flat roofs and asymmetrical shapes, but it was devoid of decorative surface elements or decorated doors and windows. It showed long ribbons of metal casement windows that often wrapped around corners, large sections of blank windowless walls and cantilevered projections over windows and doorways.

Asymmetrical in shape with smooth wall surfaces usually of stucco; rounded corners; horizontal grooves in walls or decorative lines in walls; horizontal balustrades; roofs are flat with a small ledge or coping at the roof line.

Casement or corner windows arranged horizontally; small round windows are common, as are glass blocks, and curved windows that wrap around corners.

Smooth wall surfaces often of stucco; or smooth faced stone/metal; multicolored vivid facades; geometric designs including zigzags and chevrons on the facade; towers or other vertical projections for the vertical emphasis; roofs are flat with small ledge or coping at the roof line.

Reeding and fluting can be seen around doors and windows.