Originally, one of the “small" houses built during the 1930s and 40s, the Ranch style home came into its own in the years following the Second World War as buyers, bankers and contractors pressured the Federal Housing Authority (FHA) to relax their house size requirements.

This example, built in 1955 has a cross-hipped roof: a long roof ridge running parallel to the front facade with hipped extensions on both ends. It has recessed double doors and Medina sandstone horizontal cladding.

The earliest versions, the “Ranchette” or Transitional Ranch, are seen in neighborhoods close to Minimal Traditional homes.

This "Ranchette" is located at 43 Briggs Avenue was built in 1954 without the carport and garage. It has a large picture window in the front with horizontal lights. The cladding is about twelve to 14 inches in height and likely made of cedar.  This home was in the Fairport Meadows Subdivion, owned by Domenic Prinzivalli.

They often featured a covered “breezeway” - a small space located between the garage and the house which afforded a place to sit and enjoy the outdoors. These outside areas were very popular and were included whenever space permitted.

FHA financing continued to have a profound influence on housing starts well into the 1960s. Home size increased gradually as the FHA guidelines were relaxed to accommodate higher loan limits.

The Ranch home that we know today was born in southern California during the mid-1930s and is loosely based on the Spanish Colonial details of the American Southwest. Many sources cite the influence of Frank Lloyd Wright's Prairie style and his Usonian house concept of a simple, natural dwelling, on the development of the Ranch house style. These concepts will be evident in the later Contemporary house styles.

Several cultural factors figured into the popularity of the Ranch style. Families were moving away from a front porch life to a more informal, private patio style at the rear of the home.

92 Potter Place, part of the Streppa Tract, was built in 1958. It has a picture window, casement windows and recessed entry under the hipped roof extension. One section has brick on the lower half. The rest of the cladding is twelve to fourteen inch cedar shingles.

More land was becoming available for larger housing lots as the increased use of the automobile encouraged housing starts further and further away from the city center.

Besides the FHA limits, bankers were reluctant to loan money for “modern” homes, particularly if they were to be built in large development tracts. No one thought it would be good for the country to have a lot of extreme house designs, all in one place. Traditional designs were still favored as a house style.

An example of a Ranch is this home at 50 Briggs Avenue built in 1960. It has a hipped roof with one hipped extension, casement windows and a typical Ranch garage door. It was part of the Fair Acres Subdivision.

The Ranch home fit the bill as a middle-of-the-road style, being “sort of “ modern: traditional outside and modern inside. Builders frequently added traditional details to house designs to make them acceptable. All cladding materials were available: wood, brick, stone, stucco, as well as board and batten, alone or in combination. Chimneys became broad and low.

A broad one-story shape: low to the ground with a low-pitched roof and no dormers and a two-car garage attached at the front, rear or side.

Cross-hipped and cross-gabled are the most common, with the long roof ridge parallel to the street with a single extension. Hipped and side-gabled are less common and are usually seen in rural areas or close to smaller homes.

40 Waitefield Avenue in the Forest Hills area of town has the long roof ridge that is parallel to the street.

Almost always sheltered by one or both of the overhanging roofs provided by the main roof and/or the extension roof. Often the porch cladding detail will differ from the rest of the house. Porch supports can be elaborate wrought iron or simple posts. Sometimes a shallow full-width porch is tucked under the main roof line. Simple decorative planters are seen across the entryway or along the facade.

It is in the window designs that we see the greatest variety. Enabled by pre-manufactured technology the available designs were plentiful. The large picture window at the front of the home came to define the Ranch house style. Corner windows are common. Also, jalousie windows, windows with long vertical panes, group casement, or sliding windows or a string of high placed ribbon windows to afford privacy.

The doors can be single or paired and are seen in a wide variety of designs and styles. A common version was the plain flush door. Doors with three window panes in combination with multiple panels and sidelights are also popular. Depending on the roof orientation, the doorway could face to the side rather than to the street.

The home at 25 James Street was built for Domenic L. Streppa in 1950, a lawyer for the village and a developer. It has the protruding front gables like a Minimal Traditional, but has the doorway and picture windows of the Ranch style. Note also, the low-pitched gable in the roof above the door and the cupola on the garage roof. 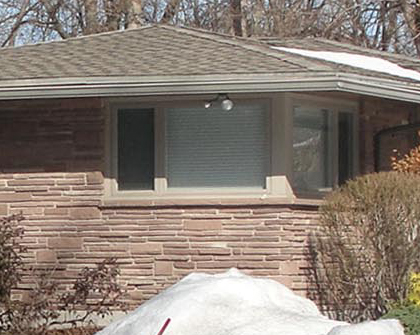 Corner windows sometimes occur in the early examples of Ranch houses, usually with a corner support. This example is at 10 Blossom Lane in Perinton. 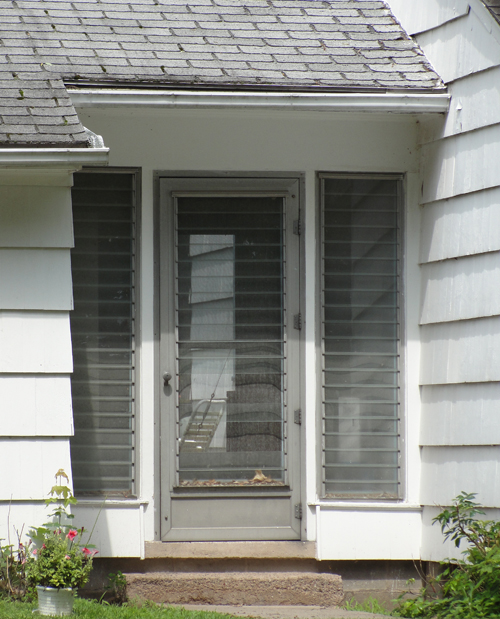 The home at 88 Dewey has a breezeway between the main house and the garage with jalousie windows and door. 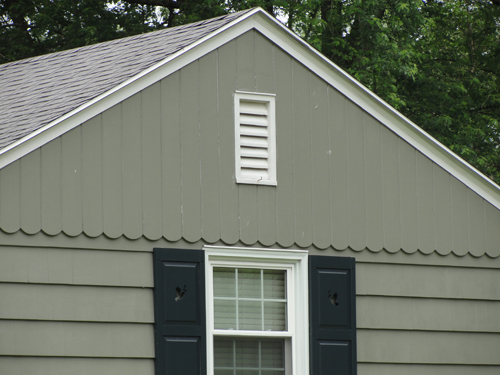 The gables have horizontal boards with a curved edge. This architectural detail was introduced with  the Minimal Traditional style home. 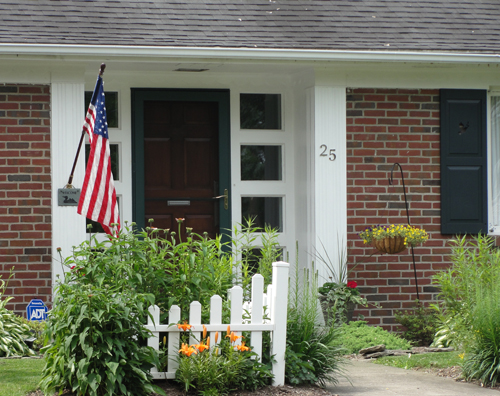 25 James Street has a large front door with window sections on either side.