The History of Egypt 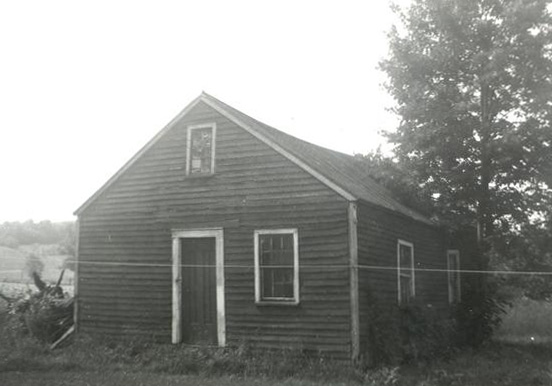 Because the earliest settlers in the Town of Perinton were farmers, they settled in the flat areas of the town that were easily cleared, specifically in Egypt and Perinton Center (the intersection of Turk Hill and Ayrault Roads). Other settlers located near the area's streams, where they built mills. Early commercial ventures also included blacksmith shops, taverns, and inns. On April 6, 1813, the first town meeting was held in Cyrus Packard's tavern in Egypt, a thriving Perinton hamlet on the stagecoach road between Canandaigua and Rochester. Many of the current and future leaders of the town lived and farmed in Egypt. Packard, for example, was Perinton's first elected supervisor.

View of Cyrus Packard's tavern ca. 1900. It was located on the north side of Main Street Egypt (Rt. 31). Egypt was a popular stop on the stagecoach route between Rochester and points east.

The Palmyra and Rochester Stage Road (Route #31) was established in 1805, with Egypt as a major stop for the stage line, where horses were changed for the trip to Rochester.

In 1806, the state improved this road (previously known by the Indians and fur trappers as “Mud Creek Road”) by the laying of logs across it, creating one of the early “corduroy roads”. Toll charges were then created (6 cents for a horse, 25 cents for a stagecoach). It later became known as “Egypt Road”, Main Street”, and still later as “Pittsford-Palmyra Road”, remaining a simple dirt road well into the early 1900’s.

Just off the Palmyra and Rochester Stage Road to the north lies Mason Road (formerly North Road). At the same inter section lies Loud Road (formerly Cherry avenue), which was laid in 1817. 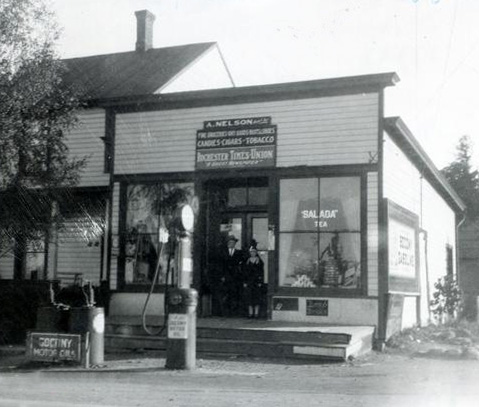 The first store in Perinton was established in 1815 in Egypt and was operated by Gregory and Co. when most of the present village of Fairport was still a swamp. Perinton’s second store was located on the southeast corner of Route 31 and Loud Road. This business was established by Cyrus Packard and his son-in-law Watson, around 1817, and is shown on the 1852 area map. This house and store at 7467 Pittsford-Palmyra Road, more recently known as “Nelson’s Store”, burned in 1895 and was immediately rebuilt.

The Nelsons store was acquired in 1924. It was first owned in the late 1800s by E.L.Dudley. The building was used as a general store for over 100 years.

The Egypt Post Office was situated in this general store when operated by Cullen Loud, Postmaster, from 1869-1870. The Post Office counter top window is on display in the Fairport Historical Museum. When operated by Willis T. Andrews, 1908-14, the store included a portable gas filling station.

The recent widening of Route 31 and the re-alignment of the Loud/Mason Road intersection necessitated the store’s removal. This general store provided a service to the early development of the Hamlet of Egypt and the Perinton community.

The Egypt Canning Co., circa 1904-1917, at the southwest corner of Loud and Pittsford-Palmyra Roads. Several workers, mostly women, are posing for a photograph in the yard.

Other businesses and properties, in Egypt's history:

Egypt was known for its excellent agriculture, even in the years of "no summers" in the early decades of the 1800's. According to some stories, the name derives from the Bible story of the Israelite migration into Egypt, a land of abundance, to escape famine in their own land. 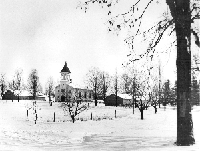 The Church Society was founded in 1837 and the church was built in 1839. It was originally a single room Greek Revival building. To the left and right are the carriage sheds.

The office of the Egypt Canning Co. Seated at the desk to left is John Martindale, one of the founders of the company. Standing is Edward J. Shults, who later became a manager of the company. The man at right is unidentified.

The school district was created in 1813 and the #3 building located at 1670 Turk Hill Road was constructed in 1822 on land purchased from John Peters. It was originally a one-room and is currently a private home.