The suburban residential development known as Forest Hills reflects the design trend of residential suburbs of the 1930s, which grew out of the "Garden City Movement" introduced in America in the 1920s. The Garden City concept was developed in England at the turn of the century to promote population movement away from unhealthy crowded cities to rural areas.

The new communities were the result of comprehensive planning and encompassed a unified plan of architectural and landscape design, which provided a healthy environment offering sunlight, fresh air, open space and gardens. Residential units were often arranged in groups that alternated with open space. The road system followed the natural grade and curves of the land, and the circulation system made use of cul-de-sacs that created a sense of enclosure and privacy. In the United States, these concepts were integrated with the naturalistic landscape principles formulated by Frederick Law Olmsted. By the 1930s, when architect/developer Harold Dygert was creating his new subdivision, these design principles had been absorbed into the mainstream of suburban design.

Forest Hills reflects the "Garden City Movement" of the 1930's.

Forest Hills embodies these design concepts with its curvilinear street pattern that follows the undulating topography and provides house frontage on two areas of park-like naturalistic settings. The houses on Lake Crescent Drive face the large "Lake Crescent" pond, while a number of homes on Westwood and Fair Oaks Drives overlook Westwood Park, a low-lying wooded area with a pond. The entire neighborhood is enveloped with mature trees. Another unifying element is the street sign plan: each street sign is crafted of carved and painted wood and matches the main signs at the Fairport Road entrances.

Forest Hills also represents one of the oldest suburban developments created by a single architect/developer in the Town of Perinton. Prior to the 1930s, Perinton was primarily a farming community and most of the town's designated landmarks reflect its agricultural heritage. Suburban development came as a result of new transportation modes, such as the interurban trolley and the automobile. A few subdivisions were developed off Fairport Road in the 1920s but none have the distinctive unifying elements that characterize Forest Hills.

Harold Dygert (1889-1989) was the architect and developer of Forest Hills. Born in St. Lawrence County, his family moved to East Rochester where he graduated from High School. He received his architectural training via correspondence classes from Columbia University. His architectural career spanned fifty years, from the early 1920s through the late 1960s. He built about 600 homes, mainly in East Rochester, Brighton and the city of Rochester. His best-known developments were the Forest Hills and Sherwood tracts. However, it was with the Forest Hills subdivision, his favorite and most notable development that gained him international recognition when 12 of his homes were photographed and exhibited at the Kodak Pavilion during the 1939-40 New York World's Fair. Later, the images were featured in the Kodak exhibit in New York City's Grand Central Station.

Seventy-five houses in Forest Hills were designed in the 1930s and reflect five styles of architecture: Tudor Revival, English Cottage, French Eclectic, French Regency, and Colonial Revival. All were popular styles of residential architecture in the early 20th century, although Colonial Revival was the most dominant. Approximately 60% of the houses in Forest Hills are designed in the Tudor Revival and English Cottage styles, which are loosely based on a variety of late Medieval English prototypes. Design elements include steeply pitched roofs, stucco, brick and stone cladding, and often with half-timbering. Another 20% of the houses were designed in the French Eclectic style, which was based on chateaus of 16th century France, and in Forest Hills is reflected in homes with round tower entrances. Less than 20% of 1930s homes reflect the Colonial Revival style, and were built of wood, brick or stone, with symmetrical facades, double-hung windows and cornice and entrance surrounds with Georgian details. Two houses were designed in the French Regency style, lending its name to Regency Drive. These houses have a formal appearance with symmetrical facades. The last house to be built in the pre-war period was the Art Deco house at 13 Regency Drive, completed in 1942. This style, also called Art Moderne, was less common as a residential style and was noted for its streamlined elements, asymmetrical facades, and corner windows.

Developer/architect Harold Dygert designed each home in collaboration with its original resident, which may account for the wide variety of architectural styles. A single draftsman, Dygert himself, drew all plans so that while each house is one-of-a-kind, all are harmonious with each other. As many as 12 to 14 houses were built simultaneously, and during their construction Dygert made daily rounds to each home to ensure that each house that carried the "symmetry and rhythm" that he had instilled in each design.

Located off the busy Fairport Road and across from the Country Club Plaza shopping center, the development is well known and easily recognizable for its high visible features including the landscaped pond, the low, curved stone walls at each entrance, and the crescent-shaped streetscape. Its charming winding streets, distinctive architecture, mature landscaping, and glacial topography, as well as its convenient location to both East Rochester and Fairport, make it a unique and desirable neighborhood in which to live.

This neighborhood was featured on the Historic House Tour of 2011. 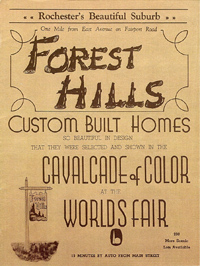 "So beautiful in design... shown at World's Fair" 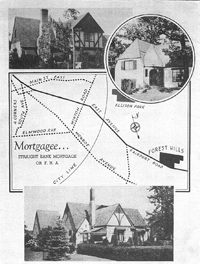