Fairport is all about continuing old traditions and creating new ones as well. Traditions are a way for the whole community to come together, but once they have diminished they should be preserved and remembered. The Little Brown Jug was a competition between the Fairport and East Rochester Varsity football teams, lasting for more than four decades, until the size gap in school districts was no longer reasonable. The history of The Little Brown Jug should be passed down to future generations as it so perfectly reflects Fairport pride, spirit, and excellence. 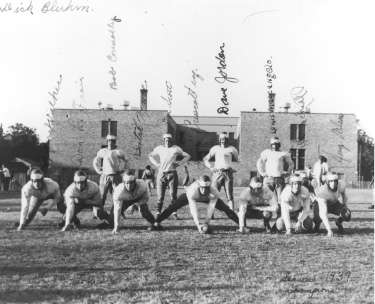 The fierce competition ran from 1939 to 1987 and was founded by Perinton town supervisor Kenneth “Putt” Courtney and Colbourne “Fuzzy” Bennett. The famous Coach Joe Cummings played a large part as well, as he coached 17 jug games and taught Physical Education at Fairport for 36 years, becoming known as the “original Red Raider.”

Football games between Fairport and ER were played since 1928, but the concept of the Little Brown Jug didn’t form until 1939.

The Little Brown Jug was seen as one of the biggest and best rivalries in New York State, as the two teams clawed for the “little brown jug.” The games were played at different locations depending on the year, but ranged from the West Avenue field, to Minerva DeLand, to Roselawn Park, to the “new” Fairport High School field, and even to the East Rochester field.

The jug stood at about one foot tall, with red, white, and blue ribbons tied to the handle. The jug was purchased at a hardware store for just 20 cents, but it wasn’t truly the jug itself that was treasured, but the title, honor, and bragging rights for the community holding the jug. The winning team would have possession of the jug until the next year, when it would go up for grabs again, but the jug wasn’t the only prize for the winning team. At the end of the game, the town mayor of the winning team would receive a traditional wheelbarrow ride through the Fairport village, while the losing team’s mayor had the humiliating task of pushing the opposing mayor in the wheelbarrow. Although each team fought hard and played hard, the games were all in good fun and the two teams created an incredible bond through this special tradition.

The games unfortunately had to come to an end by the time enrollment at Fairport had grown to be six times that of the enrollment at East Rochester. Not only size in numbers, but size in weight was a factor as well, as the Fairport team greatly outweighed the players on the ER team. The size difference was a disadvantage for ER and it became visible when Fairport beat ER in the last five games that were played. Fairport was becoming the central school for the town of Perinton while ER was still a small village school. Although both communities were heartbroken to see this tradition go, people knew that it was for the safety of the football players. A duplicate jug was created so that both deserving schools could keep one on display after the tradition came to an end; though it is not said which school has the original and which school has the duplicate jug.

The Little Brown Jug is a football game played all across the country by high school and college football teams, but the tradition between Fairport and East Rochester was surely a special one. Almost everyone in these communities showed support for the competition; whether it was by participating in spirit week at school, attending the ritualistic bon fire the night before the game, or cheering on their team in the packed stands on game day. Overall the competition was close as East Rochester stood with 26 wins, Fairport with 22, and five ties in between. The Little Brown Jug certainly gave people something to talk about back then, and the stories still stick around today.