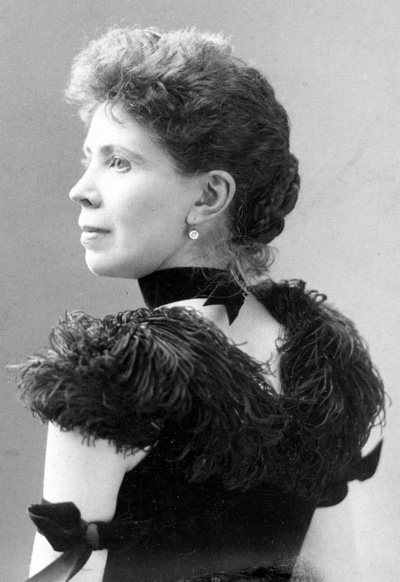 Millinery was a lifelong passion of Miss Agnes Sproul. In 1884, she purchased the millinery business of Mrs. William Bly, then located in the Bown block, later occupied by the Clark Building. 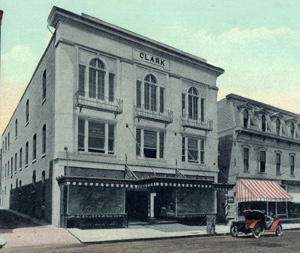 The Clark building circa 1910 on the west side of Main Street.

In 1903, she purchased the millinery business of Miss Mabel Collins at Macedon to run this business as a branch of her Fairport store. Miss Lizzie Dillon, an assistant for four years in Fairport, headed the Macedon store, and Miss Emma Worthing of Fairport headed Miss Sproul’s branch at Despatch.

In 1919, Sproul sold her business to two women, Miss Daisy Kohler and Mrs. Cora Wooden. They had learned the millinery trade from her for many years. Their new business was named Kohler and Wooden.

The Fairport Herald noted that the new owners are “well qualified and prepared to take hold of the business and carry it along to the same high degree of satisfaction to the store’s clientele as characterized its conduct under Miss Sproul’s management.”

After selling her business, she assisted other milliners, such as Hazel Bancroft, in Newark. Sproul was an experienced trimmer. She was recognized as one of the most capable milliners in this region of the state. 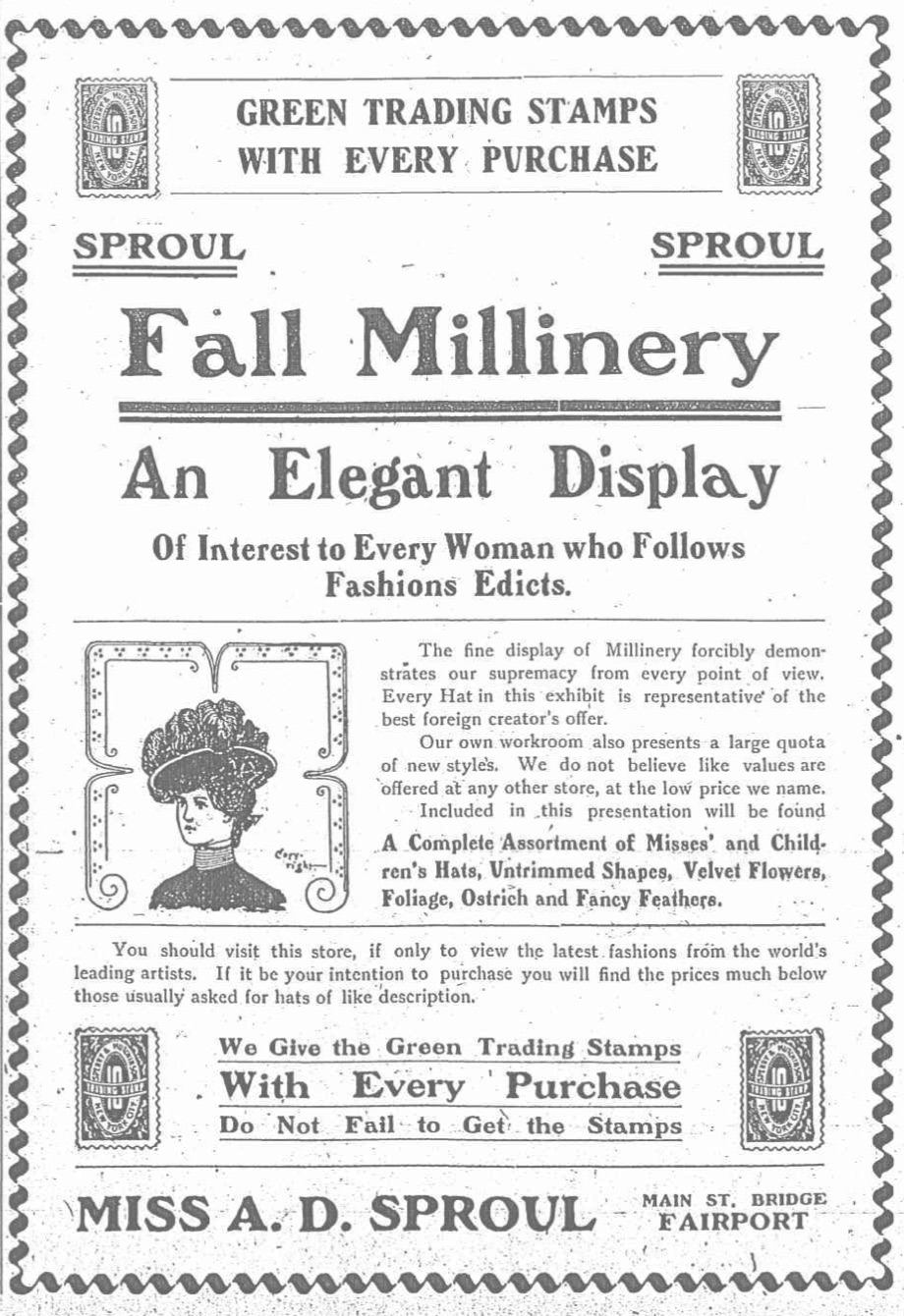 In 1923, the Fairport National Bank was looking to expand and purchased Agnes Sproul’s house and lot at 58 Main Street to build a modern, up-to-date banking institution. Her house was subsequently purchased by Allen G. Filkins.

Sproul was very active in the Order of the Eastern Star*. She held many offices, including marshal, grand marshal, associate matron, worthy matron, trustee, chaplain and program chairperson. She hosted gatherings of past matrons, the Nellie Smith Taylor Club, at her home and was treasurer of this group.

"Fall Millinery" advertisement from the Monroe County Mail November 7, 1907 issue. Note the notation of "Green Trading Stamps with every purchase". **

On February 8, 1922, she participated in a debate sponsored by the OES, an exercise that addressed a question that had “puzzled mankind for centuries”: “Resolved, that there is more happiness in single blessedness than in double blessedness.” (In other words, single life is happier than married life). “The affirmative was upheld by Miss Elizabeth Hill, Miss Lulu Lippincott and Miss Agnes D. Sproul, who produced telling arguments drawn from life’s experiences.…The oratory nearly raised the roof.”  The result of the debate: “Single Blessedness [Is] Best.”

Sproul enjoyed short motor trips to places like the Thousand Islands, and longer, more grand ones. One very grand one was a two-month group excursion that set sail from Montreal on June 27, 1925, visiting Scotland, England, Belgium, Switzerland, Italy and France.

Agnes Sproul died on December 5, 1929, at the home of Mrs. Minnie Taylor, and is buried in Mount Pleasant Cemetery. 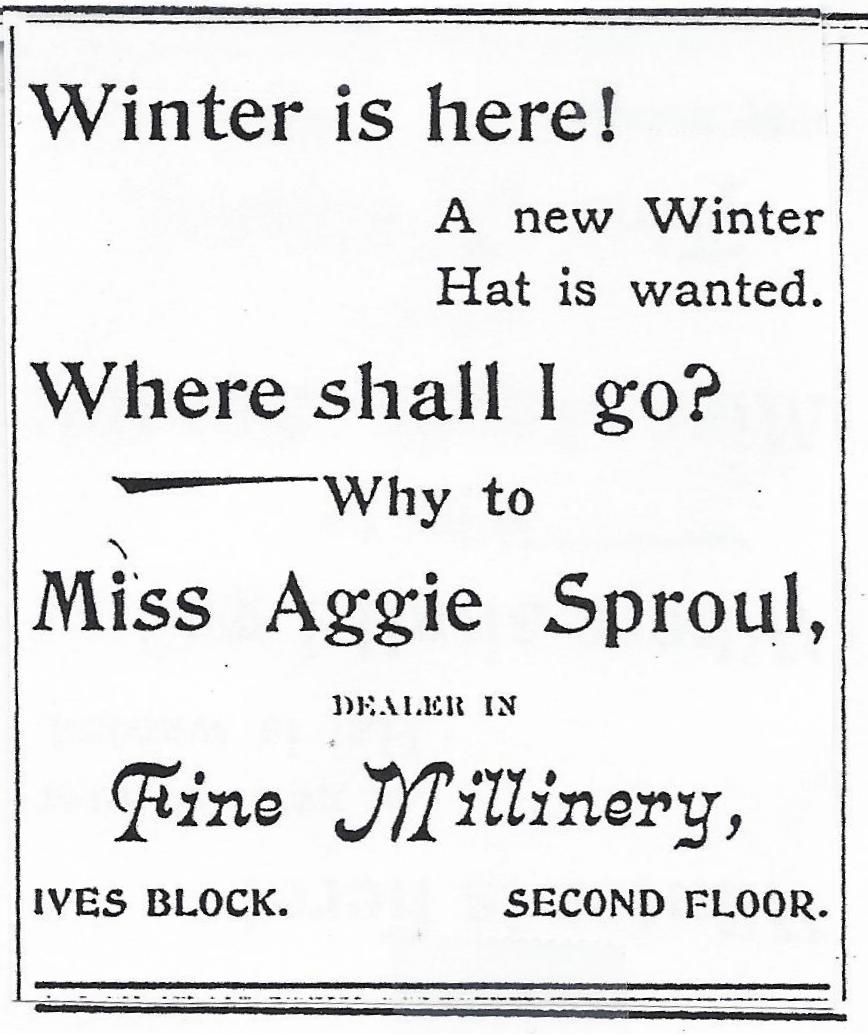 This advertisment appeared in the Fairportian, a Women’s Edition. Fairport, NY, December 4-6, 1895 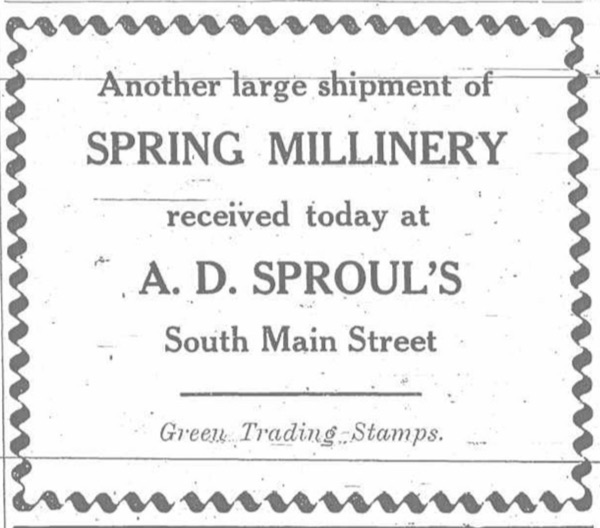 *Eastern Star
The Order of the Eastern Star is a Masonic appendant body open to both men and women. It was established in 1850 by lawyer and educator Rob Morris, a noted Freemason, but was only adopted and approved as an appendant body of the Masonic Fraternity in 1873.

The Order of the Eastern Star's mission is to provide for the welfare of the wives, daughters, mothers, widows, sisters, and other relatives of Master Masons and is devoted to religious, charitable, and educational purposes. We strive for excellency through education, training, dedication, and commitment.

**Green Stamps
S&H Green Stamps were a line of trading stamps popular in the United States from the 1930s until the late 1980s. They were distributed as part of a rewards program operated by the Sperry & Hutchinson company (S&H).