In the wintertime in the village of Fairport, one of the most picturesque spots in town is the ice skating rink by the railroad tracks at an area dubbed Fairport Junction. There, beside a quaint rink, one will find a sturdy wooden pavilion. In the winter, it offers shelter from the snow and ice. In the summer, it transforms into a stage for musical acts during Canal Days and other festivals. The sign on the structure reads, The Albert H. Knapp Rotary Pavilion. One day, when I was untying my skates after a few hours of fun, I looked up and wondered; who was Albert Knapp? And what did he do? I would soon find out that Albert Knapp is truly a piece of Perinton legend. 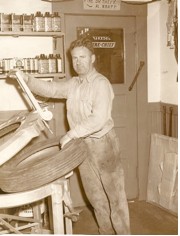 Albert was born on February 19, 1912, the son of Bruce and Lucy Knapp (Keplinger). He was a third generation Perinton resident and his family already had a rich history of community involvement. His ancestors Lauren Loomis Knapp and wife Mary were early settlers who started a canal store in Perinton (Butler). In his early years, Albert helped out on the family farm. Despite the dismal job market of the Great Depression, he managed to find work at the American Can Company after graduating from high school. In 1934, Albert began running a Texaco service station on North Main Street in the village of Fairport. Albert leased the station for 21 years, and he eventually ran another service center on Fairport-Webster Road.

In 1934, Albert opened a Texaco service station at 23 North Main Street in the village of Fairport.

Throughout the next few years, Albert branched out into many different areas of business. After loaning his black car to a local funeral department, Albert became more involved in the funeral business and studied in Syracuse to become a licensed embalmer and undertaker. Next, Albert entered the banking world, becoming a director of the Fairport Savings and Loan and later working for Colombia Banking. He helped to open new banks in Wellsville, Honeoye Falls, and Seneca Falls (Loomis).

Albert became a familiar face around the community, even serving as fire chief of the Fairport Fire Department in the 1950s (Arbelo). Albert also started up the Fairport Business Association, which would eventually lead to the founding of the Perinton Chamber of Commerce. "We started Fairport Business to promote business, help other businessmen with any problems, and to establish good relations," said Knapp. Despite his many different endeavors, Albert is perhaps best known for his role in local politics. He started out with a position on the Perinton Recreation Commission. He was elected village mayor in 1963 and served as village trustee for four years starting in 1967 (Loomis).

While Albert's accomplishments and offices are sundry, it is what he did with those accomplishments and offices that have left such a lasting effect on the Perinton community. I sat down with Albert's son Warren and his wife Pat to find out what Albert was like as a father, a citizen, and a friend. "I've never met a man or animal I didn't like," said Albert, according to Pat. This friendly and positive attitude was clearly evident in all that Albert did and said. When he ran the Texaco station, Albert always helped out his customers in whatever way he could. "He was always a great friend," says Warren. "Farmers would come in with corn and other foodstuffs to trade for gas or service and he would take it." Additionally, Knapp saved his customers an estimated 67,500,000 tire miles when he installed a recapping and tire repair machine in his station (1946). This machine was especially important due to the shortage of rubber during World War II. Warren remembers his father working with the molds and caps in the shop saying, "It was a hot job." Warren also remembers his father as being a very enthusiastic fire chief, who loved to drive around in a red Jeep complete with siren.

Albert was a very social and outgoing person. Warren and Pat remember that he loved music and dance. At a party, he was always the first to arrive and the last to leave. "He was known for selling tickets for the annual Rotary Christmas party," Warren says. "He would sell over half the tickets. He just had a way with people." 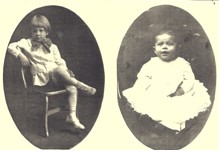 Family was vitally important to Albert. "He never could have done it all if Harriet hadn't been such a supportive person," says Warren of his mother. Warren recalls how his mother would help Albert to manage his impossibly busy schedule. She was always by his side, supporting him in all that he did, and the two loved to joke around together.

Early photos of Albert and Harriet.

"Dad always liked to joke that he had married a MUCH older woman," says Warren with a laugh. Harriett was born on February 13, 1912, just six days before Albert. Warren also has fond memories of the family vacations that Albert would take his children on in the summers. Despite his many commitments, Albert always managed to make time for family and friends.

Albert was committed to making a difference in his community, not only through his service as a public employee, but also through involvement in charitable works. He was always looking for ways to help others, whether it was out in the community or on the street where he lived. "When he was snow-blowing his driveway, he never did just his," says Pat. Albert and his wife Harriet enjoyed serving the community with "Meals-on Wheels" and they also worked on charitable projects with their church ("Al Knapp Named "Citizen of the Year""). Additionally, Albert was an extremely dedicated member of Fairport Rotary Club. He served as president of the club from 1949 to 1950 and had an astonishing attendance record of sixty perfect years (Ramsay). In 1982, the Perinton Chamber of Commerce named Albert Citizen of the Year in recognition of his innumerable contributions to the community (Loomis).

Albert's political legacy lives on today in the accomplishments of Pat Knapp, his daughter-in-law. She has been a member of Perinton Town Council since 1981 and currently serves as Deputy Supervisor.

Pat served as Fairport Trustee from 1975 to 1981 (Arbelo). She has followed in Albert's footsteps, and was named the Perinton Chamber of Commerce Citizen of the Year in 2006. Pat says that Albert was always there to support and motivate her. "Oh yes, he was very proud of me," she says. "He always helped out younger politicians. He wanted to further good government, and get others involved." As a politician, Pat says that Albert was certainly unique in his friendly and helpful outlook. "He never considered the people he ran against as enemies," says Pat. He was also a very hands-on and involved leader. Warren likes to tell the story of when his father received a call from a Perinton citizen calling to complain that their leaves had not been picked up. Upon receiving the call, Albert drove to the home, picked up the leaves himself, and disposed of them. When Albert lost a political race, Pat was inspired to work towards her own political goals. "The night that he lost, I vowed to run for office," she says. "It was important for me to carry on, because of him." Pat is not the only one who Albert took under his wing. Clark King served as mayor of Fairport from 1989 to 2006 (Champagne). He knew Albert almost his whole life and came to greatly admire his passion for the community. "He was a mentor to many of us," King said. "He was the one that first encouraged me to be mayor" (Arbelo).

Perinton is a place that many people grow up in, and choose to never leave. They choose to work, live, and raise their families in their hometown. Albert Knapp did all of that, but he also made a difference in his community and had a profound effect on those around him. He was known for his selflessness, his can-do attitude, and above all, his pure love for Perinton and the people who live there.

Now, when I see the pavilion by the ice-skating rink, I pause for a second to remember all that Albert Knapp did for our community, and what a fantastic example he has set for each and every community member to follow. "Albert followed the Golden Rule," says Pat. "Do unto others as you would do unto yourself." Albert and his impact on our community will certainly never be forgotten.

Editors note: Lauren Loomis Knapp built the home in the village at 42 Woodlawn Avenue. Albert H. Knapp (1912-2005) lived at 15 Fifth Avenue in the Faircroft neighborhood in the village for over 75 years.