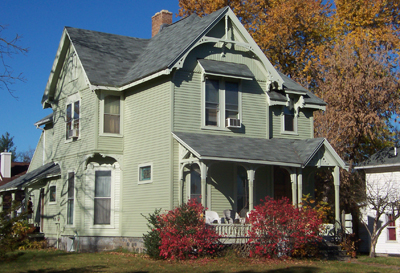 Charles H. Howe was born in 1846 on the Howe family homestead, where he lived for his first twenty years. He did not continue the family farming tradition, but moved to the Village of Fairport and worked for a time in the furniture manufacturing business.

His next venture was as a traveling salesman for the DeLand Chemical Company. He worked in sales for twenty-seven years, the last seven of which were with the J. Hungerford Smith Company of Rochester. He traveled the country, visiting every state, becoming well known and respected.

At the same time, Charles was part of the firm of Todd & Howe who operated a general store in Fairport.

Charles H. Howe House built circa 1882 is an example of the Stick style.

He also had an interest in a manufacturer of window screens, baking powder, and spices. Not content with those business ventures, he also served as Vice-President of the John F. Bauer Company of Mount Morris, manufacturers of Mo-Ko, a cereal coffee, and a line of patent medicines. Charles Howe was a busy man.

He and his wife Ella and their two children, Mabel and Burton, lived in a fine house at 26 Perrin Street designed by John Rochester Thomas. (The house still stands and retains much of its original detailing 2021) Not content with only one property, Howe also owned a large brick building in the center of Fairport Village and a productive farm in Nebraska.

Mr. Howe was closely identified with the industrial growth of Fairport, and was one of its most influential and respected citizens. He was at one time president of the village and also president of the board of trade. He was a member of the Masonic fraternity and of the Fairport Protective Association.

He believed that because of the many opportunities for enterprising individuals in Fairport, western New York was the best place in the country to live. Charles died in 1903, Ella in 1932. Both are buried in Greenvale Cemetery. 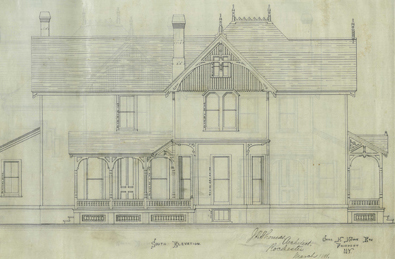 The architect drawing here shows the south side of the home which has a cut-away bay and one story porches.

Howe home in the Stick Style

The architect that designed this house at 26 Perrin Street, just two doors down from the Fairport Historical Museum was John Rochester Thomas. The Museum has the original architect drawings signed by the architect dated 1881 that were generously donated by decendents of Charles Howe.

This home shows many features of the Stick Style of architectural design common from 1860 to 1890;  gabled roof with steeply pitched cross gables with decorative trusses, overhanging eaves, wood cladding and one-story porches with curved braces.

The style is defined primarily by decorative detailing - multi-textured wall surfaces and roof trusses whose stickwork mimics the exposed structural member of Medieval half- timbered houses.

The Howe house has the most common type of truss detailing in the gables, called the King's Post. The trusses are embellished with cutouts and brackets. The windows have shed roofs with curved bracket supports. The one-story front porch has a gable with truss detail mirroring the upper floor gables, bracketed porch supports and carved spindles. The gables have vertical wood boards in a picket-fence pattern used as wide bands of trim under the eaves. The south side has strong vertical and horizontal lines, vertical in the gable and cut-away bay windows and horizontal board between the upper and lower stories. The second story above the cut-away bay has curved bracket supports. 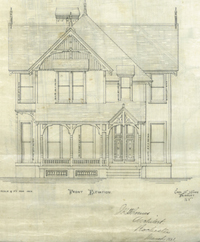 The front view of 26 Perrin Street. The entire set of architect drawings are archived at the Fairport Historical Museum. 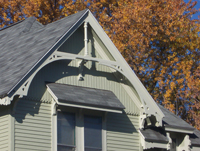 Gables have decorative trusses and picket fence-pattern trim under the eaves. 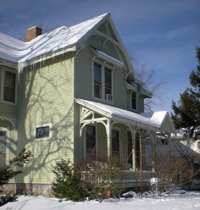 Notice the beautiful porch, baniters, post and bracketing. The photo was taken in  2011.