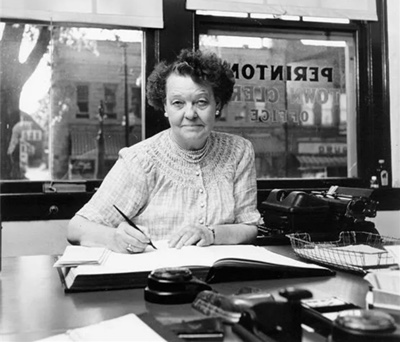 Shortly after the conclusion of what was often referred to as the Great War, in November of 1918, the New York State Legislature adopted a law that requires municipalities to appoint a local historian.

Legislators were motivated by the importance of capturing the role of the state’s villages, towns and cities in the war effort. In Perinton, the first municipal historian was Charlotte Clapp (1884-1964). She was appointed to the position in 1921, and immediately immersed herself in the collection of information, documents and photos related to the community’s involvement in the war. Perinton has had a municipal historian ever since, a total of 100 years.

Charlotte Clapp in her office at the Town of Perinton office at 31 South Main Street.

Historian Clapp gathered documentation from all available sources, and by August 1922 had submitted a comprehensive report to county and state officials. Her efforts were recognized as the benchmark for such records.

Not long after her appointment as town historian, Charlotte Clapp was recruited to also serve as deputy town clerk, assisting A. W. Palmer. When he died unexpectedly in November 1924, the Perinton Town Board appointed Clapp to complete his two-year term.

The confidence shown in her was shared by the community, for she won her first election by more than a 3-1 margin. Charlotte Clapp was the first woman to hold elected office in the town of Perinton, an accomplishment achieved only a few years after women gained the right to vote.

Over the next 32 years, Charlotte Clapp enjoyed wide support in her position as town clerk and was easily reelected every two years. For over 34 years, she also functioned as town historian while setting the bar high for those who followed. During World War II and immediately after, Clapp amassed an amazing collection of data, photos and artifacts relating to the community and the soldiers that served. The collection continues to be of immense importance.

Charlotte Clapp lived virtually her entire life in the family home at 15 Perrin St. A graduate of the Fairport High School Class of 1904, she earned a diploma from Mount Holyoke College in 1909. She was employed for a period of time as a teacher in Fairport schools, but soon found her calling as a public servant in town government.

Upon her death in 1964, her hometown newspaper published the following statement: “This week the community mourns the passing of a great lady and dedicated public servant. Charlotte Clapp was probably Perinton’s best known woman, one who had given her life to service and in the process, won the admiration and respect of all that knew her.... Charlotte Clapp will always be remembered, and those remembered in mind and heart, never die.”