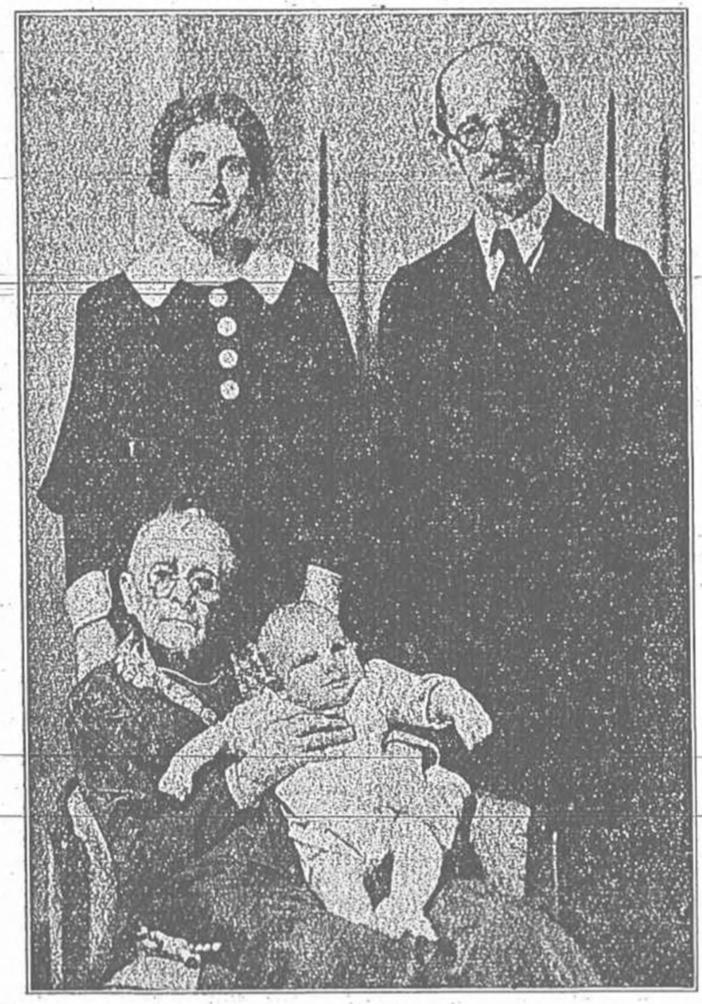 In 1902 Claude was living in Buffalo, NY, but returned to Fairport. He, his wife Florence and two daughters Alice and Anna lived with his parents at 106 West Church Street.

Prior to 1907, Charles M. Lumbard, who went by C. M. Lumbard had contracts for the remodeling of the Methodist Church and masonry work on the Statler’s house on Woodlawn. 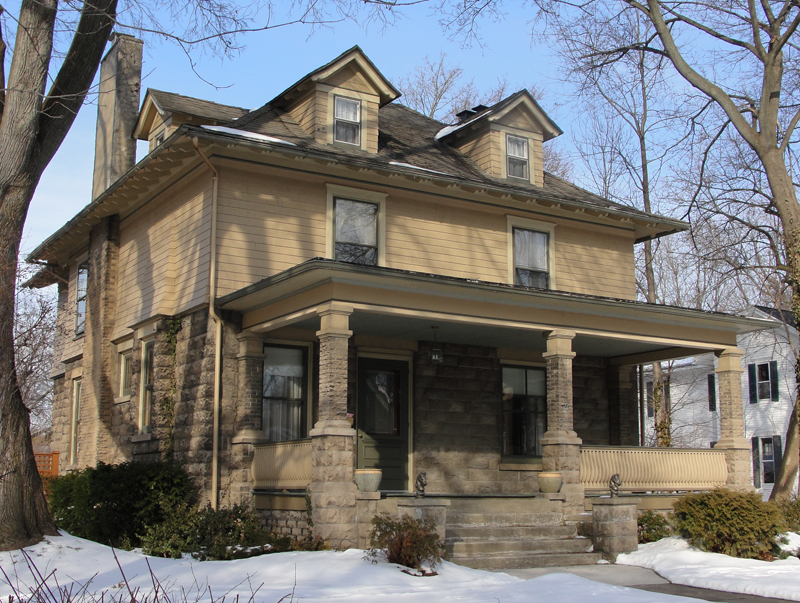 The Lumbard's home at 106 West Church was built in 1907 in the Craftsman style. The lower half of the house is constructed of cement blocks that look like ashlar. It has a flared roof line and exposed rafters that distinguish it from the Prairie style.

He owned and operated a factory on Parker Street near the bridge, which was later moved to West Avenue. The newspaper states that he had just added another cement block machine to his plant, which makes blocks up to 4 feet. By 1907, Claude and his father were partners in the Pilot Concrete Construction Company.

Charles and Claude attended the National Association of Cement Users and “arranged with the controlling company to be able to do reinforced concrete construction according to the Kahn system, claimed to be the best now in use”. They also advertised Jaeger Concrete Mix.

By 1908 many of the advertisements showcased an image of their home at 106 W. Church Street. This home used concrete blocks cast with a face imitating rock-faced ashlar stone. a new type of building material. Based on the style and rustification details used in the house they were likely influenced by the architect Frank Lloyd Wright and Greene and Greene Architects.

In 1911, Claude built 33 Dewey Avenue and moved there in 1912 with his mother and his daughters. His wife had died around that time. He resided at this address for more than 20 years.

Claude was involved in many projects in Fairport. He built a stucco house at 43 Nelson Street. Also noted in the local papers was a warehouse foundation (30 x 90’) on Main Street for D. B. Fuller, the Lutheran Church foundation at Perrin and Church, Harts Nursery cistern, many sidewalk installations and repair, and the foundation for the Water Tower on Summit Street. 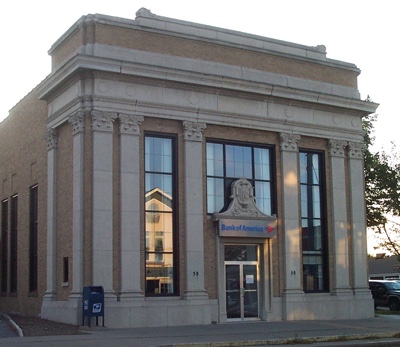 The Fairport National Bank and Trust Company (photo on left), now the Bank of America (2019), a local designated property opened on Main Street with great excitement in 1924 and was described as being “a model of convenience, good taste and elegance throughout”. Claude M. Lumbard, was the general contractor for the project. The architect was J. Mills Plant of Rochester.

The masonry work was done with tapestry-faced buff brick with Norris granite trimmings. This Italian Renaissance style building has six broad pilaster columns of Norris granite, extending from the ground up-to the cornice near the roof. It has a handsomely carved ornamental frieze and cornice over the door which adds still further to the beauty of the building....” The description goes on to describe a fabulous building.[i] Clearly Mr. Lumbard was a very skilled mason.

Above is the Sanborn Map of 1915 which shows the Pilot Concrete Construction Company along the canal on the west side of Main Street. 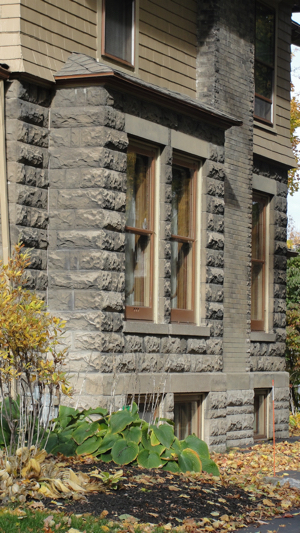 The home at 106 West Church that was built by the Lumbard for the family. It was built in 1907. Note the rusticated cement black on the first level of this Craftsman home.

In 1923, residents were required to repair "sidewalks in poor condition". Many hired C. M. Lumbard. You can still (2019) find this plate embedded in sidewalks around the village. 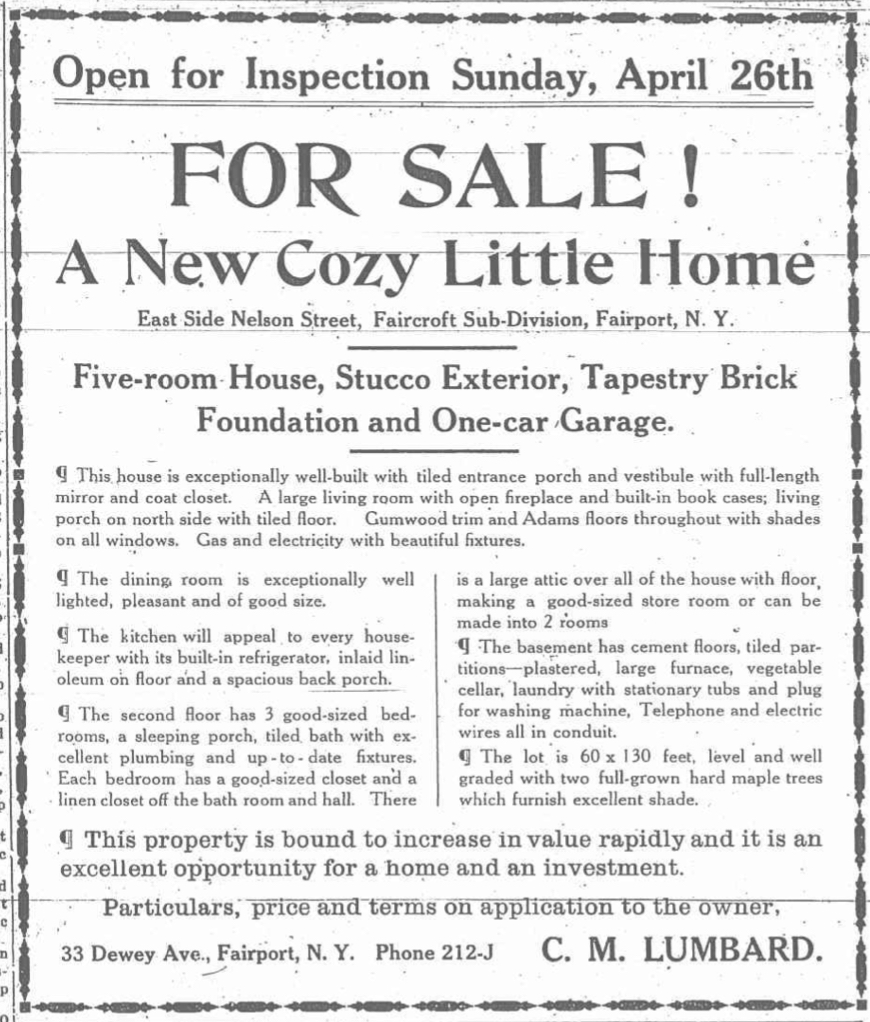 He built the house at 43 Nelson Street which was originally made of stucco.