Elma Nau, daughter of Mr. & Mrs. Fred Nau, was born in Honeoye Falls. She graduated from Honeoye Falls High School in 1911 and Syracuse University in 1915, with a major in Library Science.

Nau moved to Buffalo and worked as a librarian for the Buffalo Public Library System for five years. While in Buffalo, she met Mason Gaffney, a Williamson native, who taught history at East High in Rochester. They were married in 1922.

The Gaffneys lived in Rochester. For two years Elma Gaffney worked in the library at East High. Then in 1924, their only child, Patsy, was born. Patsy died in 1933, when she was nine years old.

A New York State law enacted in 1895 allowed school districts to transfer school libraries to local library boards. When the West Avenue High School opened in 1924, Helen DeLand, Fairport public librarian, became head librarian of the school libraries as well. The workload quickly became too much. In the early 1930s Elma Gaffney began helping out at the public library. She became a part-time librarian in 1933, temporary director in 1935 and full-time director in 1938.

The library, at 18 Perrin Street, was described by Gaffney as “an old frame house with bulging walls, mice running under the desk, cracks in the floor, tilting stairs and a chimney that intermittently dropped bricks”. It needed to be replaced.

In 1929, Robert Douglas, founder of the Douglas Pectin Company, died and left 500 shares of Douglas stock to the library. That gift, plus a donation of $8,057 from the Perinton Patriotic League, allowed library trustees to hire Henry Martin, a local architect, to draw up plans for a new library.

The deepening Depression continually decreased the value of the Douglas shares. By 1931, they were worth only $22,652, not enough to construct a $44,000 library. The plans were shelved for a while, but in 1936 the WPA took on the Fairport Library as one of its projects.

Mason Gaffney died of a heart attack in 1944. He had served as a yeoman in the Navy during World War I, and in 1942, at the age of 46, he enlisted in the Army, serving as an ordnance officer at Treasure Island Naval Base in San Francisco. After his death his widow took a leave of absence from the Fairport Library and served instead in the hospital library at the Treasure Island base.

Gaffney returned to Fairport and public library in 1946. She became the library. She was the person who knew what books patrons liked and recommended new ones, or old favorites, for them to try. She guided the reading habits of generations of Fairport young people. She once described the Fairport Library as a place where “there is a warm corner where old pensioners catch up on their afternoon naps. There are tables at which bobby-soxers may sit while waiting for eligible date material to appear. There is a snug vestibule for waiting. There is a children’s room where harried mothers deposit their scamps for the afternoon. There is an alcove where parcels are left while housewives are bill-paying. There is a telephone over which dates are made – or broken. There are obscure sections of the stacks apparently well-suited for clandestine kisses…The public library also has books to lend.” She recognized that the library was central to the community, and worked to keep it that way.

In 1951, she founded the Library Guild. Members helped with filing, shelving and book repair. The group met once a month to share work and lunch at the library.

In the early 1950s, Gaffney became actively involved in the formation of the Monroe County Library System. The proposed system would allow local libraries to maintain their individuality and independence while benefitting from mass purchasing, rotating collections and interlibrary loans. According to Harold Hacker, Director of the Monroe County system, Gaffney was “part of the missionary team that spread the gospel of library systems throughout New York State, speaking to all interested groups and the New York Library Association about the benefits to be derived when a group of libraries banded together to share resources.” Fairport joined the Monroe County system in 1953.

Gaffney was a member and past president of the Fairport Historical Club. She was a member of her sorority, Alpha Chi Omega for more than 50 years. She attended First Congregational Church and was area chairman of the March of Dimes for many years.

In 1969, she retired. She continued to volunteer at the Fairport and Penfield libraries. She also tried a different lifestyle. She traveled extensively both in the United States and abroad and often presented travelogues on her journeys.

Elma Gaffney died in 1982. She is buried in Honeoye Falls with her husband and daughter. The community meeting room at the Fairport Library is named in her honor, recognizing her many contributions to the library and the community – among them, encouraging generations of residents to read, read, and read some more. 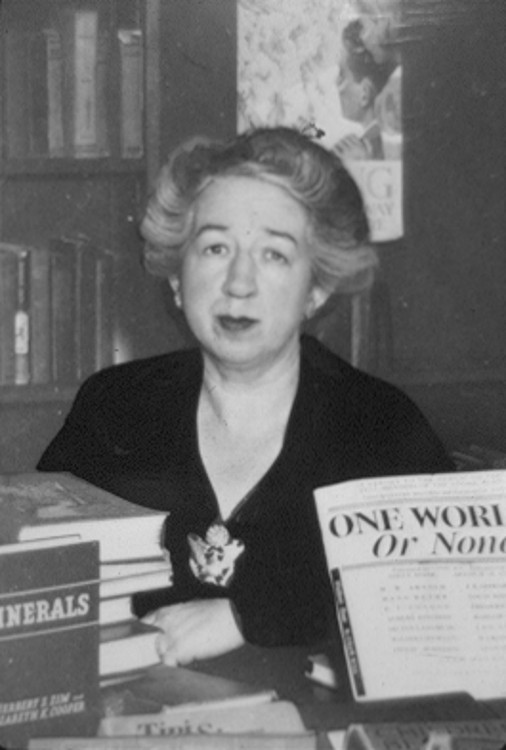