I feel very lucky to live in a piece of Perinton history. I was exposed to it at a very early age of just a few weeks old when the Perinton Historical Society selected our home to be a part of their annual tour. I have grown up in what was once the Moseley Farm that is located on the corner of Moseley Road and Garnsey Road in the Town of Perinton, NY.

I decided to conduct my research on Hiram B. Moseley, one of the two brothers that built my house and to also give some information on the historical aspects that still remain in our old farm house and property. The information that I have put together on the Moseley family was culled from documents I found on Ancestry.com, the NYGenWeb, FamilySearch.org and Google.com/books. While doing this project, I learned that there is a lot of information available on the families that lived in the 1800's just by looking at the census records.

Hiram and Leander Moseley were brothers that moved to and settled in the Town of Perinton around 1839. In the book Landmarks of Monroe County, NY by William F. Peck, there is a brief biography on Leander that informs us that he is the son of Araunah Moseley, originally of Massachusetts, and that the brothers were born in Lebanon, Madison County, New York. In Leander's biography, he indicates that when he settled in Perinton, there were few but log-houses in the region, and the forest yet awaited the settler's axe. Leander married Elizabeth Dewey and they had four children. 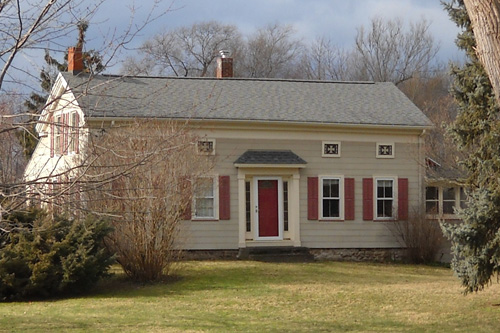 At the time the brothers arrived in Perinton, Hiram was about 33 years old and Leander was about 29 years old. Together, they purchased approximately 150 acres of land in the southern part of the town of Perinton.

At that time, Hiram and Leander built a small house on the land and lived there with Hiram's wife and children. The house was built in the Greek Revival farm house style. After a few years of living with Hiram and his family, Leander built a house of his own just a very short distance down the road (that is still lived in today) and it looks like the brothers separated their 150 acres at that time.

Leander built a house at 943 Moseley Road. The brothers likely split the 150 acres at that time. (photo from 2012)

There is an additional person living there, Mary Alcott (42), but, unfortunately, the Census does not indicate her relationship to the Moseley family. It is interesting to note that the hand writing in the census is sometimes very hard to read and that there are misspellings. Also, as part of the 1850 Federal Census, there was a Production of Agriculture document that listed all of the farmers with pertinent information on their farms. That document shows that Hiram owned 50 of the original acres that were worth $3,000 at the time. He owned 2 oxen, 3 milking cows, 2 other cattle, 25 sheep, 250 bushels of wheat, 100 bushels of Indian corn and 200 bushels of oats. He must have worked very hard with his sons to keep his farm going.

In the 1855 New York State Census, Hiram is 49 years old. The census indicates that he is from Madison County, a 16 year resident of the Town of Perinton, he is a farmer and that he owns his property. This Census also helped me to know that his wife, Harriett, was also originally from Madison County along with two of their children. It also indicates that two of the younger children were born in Ontario County which leads me to believe that they must have lived in that County for a short time before coming to Monroe County. In 1855 the Moseley's had a servant named Mary Alexander that was from Ireland living with them. At this point, I found that each census gives different information that helps you to learn a little something new about the life styles and people of that time period.

I next looked at the 1860 Federal Census and found Hiram at the age of 55 with his wife Harriett (age 51) and their children Hiram (age 28), Arunha (age 24 and spelled differently than in 1850) and Hattie (age 19). They also had two woman listed in their household, Mary Conklin (age 19) and Roxanne (age 14 and no last name given) with the notation that they were domestic servants. This leads me to believe that the farm must be doing well since they have had domestic servants throughout the years.

The 1860 Census is the last time that I found Hiram or his wife Harriet on a census, so I then moved on to see if I could find out when they died. According to the records of the NYGenWeb Tombstone Collection (tombstones in this cemetery were copied in the summer of 1987 by Richard T. Halsey), Hiram B. Moseley died on January 29, 1866 at the age of 60 and his wife, Harriett, died on October 14, 1871. It seems that they died pretty young. Hiram and Harriett are both buried at Mt. Pleasant Cemetery in the Town of Perinton.

Today, the farm animals are gone along with most of the farm buildings, but many aspects of the house and remaining property are still intact. Hiram and Leander built the structure of the house by hand in the post and beam style. That original structure is still very visible throughout the house. You can see how new additions have been added to the house with modern techniques and machinery since it was originally built. I think the coolest room in the house is my bedroom. It is in the original part of the house and has a unique shape and is the best place to see the post and beam structure. The twelve inch hand hewn beams are visible on both sides of my room. That means that you can actually see the axe marks in the beams from when they stripped the bark from the logs and squared them off. The rafters that go to the tip of the cathedral ceiling are full logs that still have their bark on them. Also, in my room, I have a chimney that only goes half way down the wall and has a book shelf underneath it. The chimney has a round hole in it indicating that it might have had a wood burning stove attached to it at some point. I love to sit in my room and imagine what it must have been like to live on a farm all those years ago. Across from my room, there is another bedroom, however there is evidence that it was built at a later time. The ceiling is still cathedral, the beams along the wall are still hand hewn, but the rafters are machine sawn instead of logs.

Several other interesting things that we have in our historic house that are not found in modern homes are: a large cistern underneath our dining room which we assume was at one time used to collect water for the house and farm; a well underneath our family room along with a huge pile of coal that we think was used in the cook stove; a dirt basement; oriel-style nine over six windows in our dining room and kitchen that we were told date back to the civil war era, cupboards made from recycled barn wood and a cast iron coal burning cook stove in our kitchen. We even have an exposed chimney that goes right through our bathroom.

Our family room used to be a small shed-like structure that was referred to by the locals as the "egg room." Many people from the area came to the farm to purchase their eggs from the "egg room." We have met people that still remember coming to our house to buy eggs with their parents when they were children. The "egg room" has since been razed and the family room was built in its place.

Our property makes up approximately an acre and a half of the original 150 acres. Along with our house, there is a two-story barn, a three bay carriage house, a chicken coop, a little house to milk a cow (wish we had one!), a well, and a three seater outhouse. I often wonder what it must have been like for the kids that grew up on the farm to have had to go to the bathroom outside in the winter. There is a plow in the yard that must have at one time been pulled by a horse to sow seeds. Many times when my parents are working in the yard, they come across old animal bones, pieces of dishes, bottles, and even an engraved silver spoon from the Powers Hotel that was once a hotel in the City of Rochester, NY. The Powers Hotel is still standing and is now used for office space.

Several years ago, we came across an old map that showed that our driveway used to be the old Garnsey Road, but the road was moved to its present location on the other side of our house when most of the property was sold off and homes were built.

Another interesting bit of information is that after Hiram and Harriett died, around 1872 William Baker purchased the property from the Moseley family, and at that time, Moseley Road changed to Baker Road. And then at some point after that, it changed back to Moseley Road.

I love my historic house, the barn and the carriage house that were built by the farmers that worked hard to make a living for their families, the beautiful old trees and feeling the rich history that makes me very proud to live on what we still call Moseley Farm. I will miss my comfortable old house and the log beams in my bedroom when I go away to college this fall, but it is comforting to know that I will be back to visit during school breaks.

Hiram and Leander built a small Greek Revival house on their land located at 1055 Moseley Rd. (photo from 1940)

After a few years of living with Hiram and his family, Leander built a house of his own just a very short distance down the road at 943 Moseley Rd. (photo taken in 1947)