Imagine a four year old with no adult supervision, walking herself to the doctor’s office for an allergy shot. It was a different world in 1952, when Susan Harris of Fairport’s South Avenue did just that. The office of Doctor Dean was just around the corner at 11 West Church Street, now one of the village’s designated landmarks. The former patient recently recalled that after receiving her shot, Doctor Dean “gave me a prescription bag of cinnamon imperials with directions to take six every two minutes. I would go home and watch the clock and follow the doctor's orders until they were gone.”

Originally from Connecticut, George Adgate Dean spent most of his life in western New York. A Boy Scout in the early years of the organization, he earned the highest rank of Eagle, and was also the only Sea Scout in the Buffalo area at the time.

He graduated from Lafayette High School in Buffalo in 1922, and earned a degree at Ithaca’s Cornell University. It was at Cornell that he met his lifelong partner, Louise Griswold, a native of Warren, Ohio. 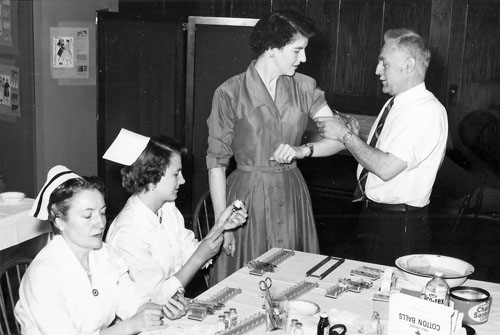 After graduation from Cornell, George Dean headed back home to pursue a medical degree from the University of Buffalo, where he also found time to join the school’s wrestling team. George wasn’t a big man, five feet, six inches in height. Wrestling at 136 pounds, he won his weight class in a 1927 Buffalo tournament. Not lacking in confidence, he then took on challengers in the unlimited class, some over 200 pounds. It must have been quite a sight to see the diminutive Dean prevail against the heavyweights that day, as he left the gymnasium undefeated.

Doctor Dean and Louise Griswold were wed in July of 1931, and after briefly living in Rochester, settled in Fairport. Their home and his practice shared the same address – 11 West Church Street, where they raised their family.

He served as the town’s medical officer for 14 years, and was the physician for Fairport Schools from 1942 to 1967, although his service was interrupted by World War II. His first duty was with the 121st Calvary, N.Y. National Guard. At the age of 39 in 1944, Doctor Dean enlisted and served as Lieutenant Commander at the Naval Hospital at Sampson, at Seneca Lake.

Doctor Dean was a noted allergist, chief of Genesee Hospital’s allergy clinic, and a clinical assistant professor of medicine at the University of Rochester’s School of Medicine. He maintained a lifelong involvement with the Boy Scouts, serving as a mentor and advisor. Still, he may be best remembered as the school doctor for countless local children over three decades. That’s a lot of cinnamon imperials – just ask Susan Harris.

After her husband died in 1970, Louise Griswold Dean lived another 25 years, and was recognized for her own accomplishments in the field of medicine in 1987. She served as a volunteer with the Red Cross for an incredible 70 years, beginning with the Junior Red Cross as a teenager during World War I.

Dr. and Mrs. George A. Dean's home at 11 West Church Street was designated a village landmark in 2011.