How fortunate for Fairport and Perinton that Sue Roberts made a pivotal career move!  She graduated from St. Joseph’s Hospital School of Nursing in Syracuse in 1964 and specialized in intensive care and emergency nursing, including seven years at Strong Memorial Hospital’s Emergency Room.

Her next educational pursuit, however, was not in the field of medicine, but rather in history. Roberts graduated from Nazareth College with a degree in history in 1982. In 1983 she became the Town of Perinton Historian.

A thorough keeper of the records, Sue organized town records, making them more accessible to employees and residents. In 1985, she initiated the task of locating and preserving Perinton’s World War II records. No small feat, she unearthed ledgers buried deep in a trunk, original documents of profiles, newspaper clippings, and other vital information about families and service records of the 518 residents who served in the armed forces in World War II. Sue also helped preserve records of local vintage structures by assisting with the Landmark Society’s survey of pre-1902 buildings.

Roberts’ efforts in educating the public about Perinton can be measured in miles – on land, sea, and the world of nine-year-olds.  She led many walking tours for the Fairport Library, the Landmark Society, and for other community groups and tourists. Daylong bus tours for Senior groups and the Landmark Society also kept her busy.  She narrated tours on the Colonial Belle and the Emita II and began interactive sessions for fourth graders studying local history. She delivered presentations on local history to many community groups and authored many weekly columns on Fairport’s history for the local newspapers. She placed historic photos in town businesses, restaurants, town buildings, and the Town Hall, as well as planning for Perinton’s 175th anniversary celebration.

A crusader for preservation, Sue worked on the writing of the Perinton Historic Preservation Ordinance, adopted in 1987, and was a member of the Historic Architecture Commission, whose foremost goal was “protecting and enhancing the landmarks and historic districts which represent distinctive elements of Perinton's historic, architectural and cultural heritage.”  She lent her voice to ensure preservation of the Potter Carriage Barn, when the new Teen Center was built. In a February 11, 1987 letter to the editor of the Fairport-Perinton Herald Mail, she wrote, “It seems to me the village board and Lions Club could better serve the village community by improving what we have and cannot be replaced rather than discarding a landmark in favor of a similar structure – one that could never complement the Potter Community Center as well as its original companion.”

Roberts retired her historian’s badge in 1997, but not before working tirelessly to expand Perinton’s identity as a community separate from Fairport. She identified town landmarks, historic districts, and important citizens, and authored hundreds of weekly columns on these topics in the Fairport Herald Mail and the Perinton Fairport Post.

Life after fourteen years as Perinton Town Historian has been busy and community driven. She became the Perinton Town Clerk, serving from 1997 through 2008, a position that enabled her to continue preserving Town Records and making them available for historic research. Perinton Town Supervisor Jim Smith described her as the “glue that holds the day-to-day business of the town and the Town Board together.” From 2009 to 2019, she was secretary of the Fairport Perinton Senior Living Council. In 2010 to 2012, Sue co-chaired, with others, a committee planning another significant Perinton celebration, the Bicentennial. In 2020, she assumed the role of president for the Fairport Historical Club.

Sue was raised in the Mohawk Valley village of Clinton, NY, where her love of architecture and history began. She is a longtime resident of Fairport, living here at 208 S. Main Street for 51 years with her husband, Ron Roberts. The Robertses have three children and two grandsons, boys fortunate to have a grandmother who has given them a priceless gift: a love of history. 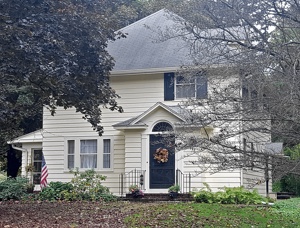 Sue Roberts at the 2012 Perinton Bi-Centennial