A Tale Of Two Barns 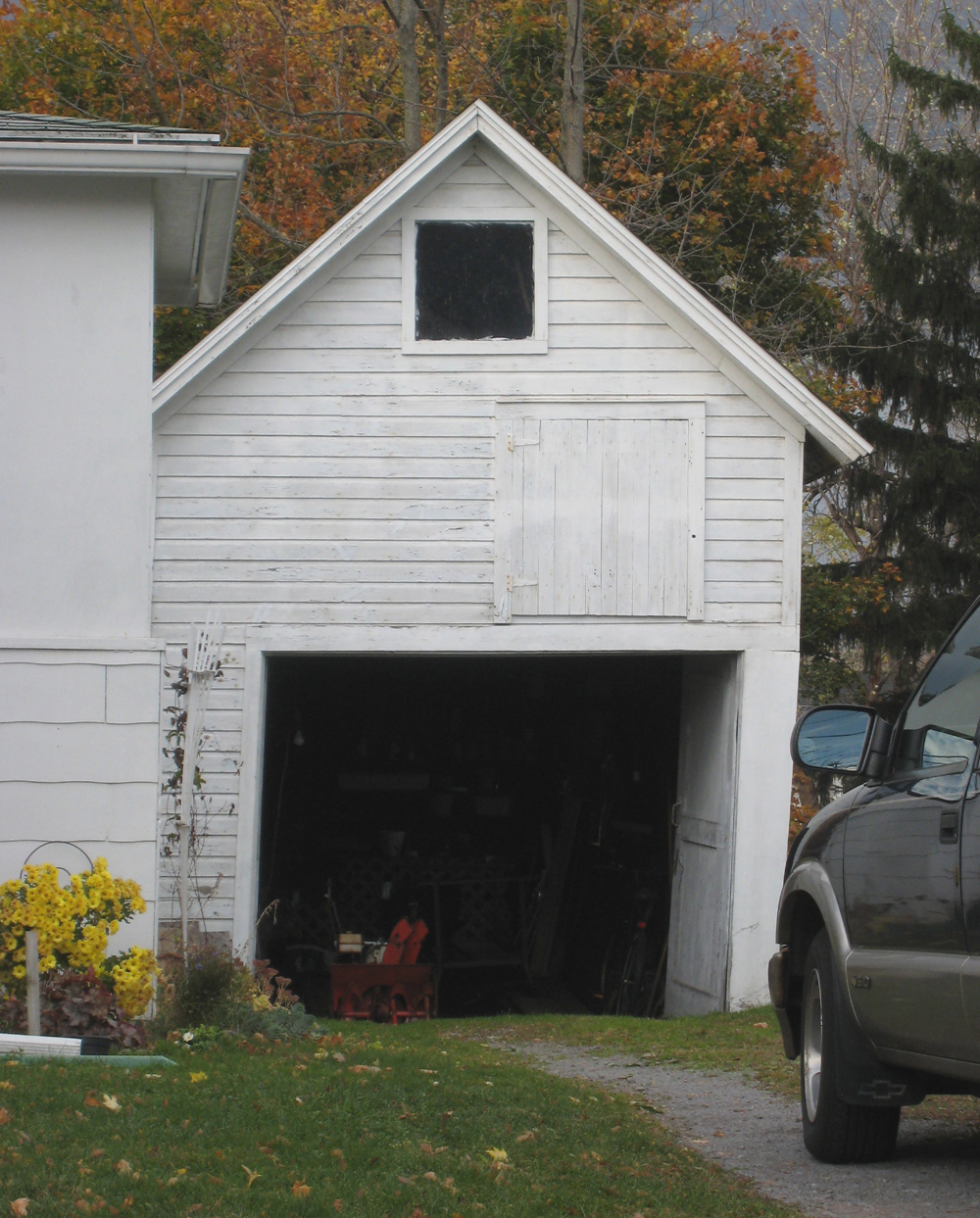 When Lance Warner looked at his barn at 74 Roselawn Avenue this past year he was undecided about trying to save the building.

The big front doors opened into the structure which shortened up the interior storage space, and it was tilting drastically to the east. But estimates to replace it with a two car garage were twice the cost of restoring and stabilizing the present structure. He decided to keep the barn.

It is difficult to determine all the uses this old barn has been put to over the years. The house dates to the 1870-80's, the barn from a date prior to 1902. It is held together with square nails, and saw marks on the interior boards confirm late 19th century planing. Hay drops are visible in the loft floor and a hay door is located at the front of the building. A tall door at the rear is large enough to walk a horse through. Siding on the interior walls indicate a stall or buggy bay but there are no signs of either now.

Mr. H. Martin, the owner of the house for 53 years prior to the Warner's, had a repair shop outfitted in the loft area of the barn. It is still there, dusty and rusty, his workbench and all his tools right where he left them. We don't know what he did for a living or whether this was his hobby but it had something to do with repairing machinery.

The carriage barn at 74 Roselawn Avenue was over a 100 years old and not in the best shape . 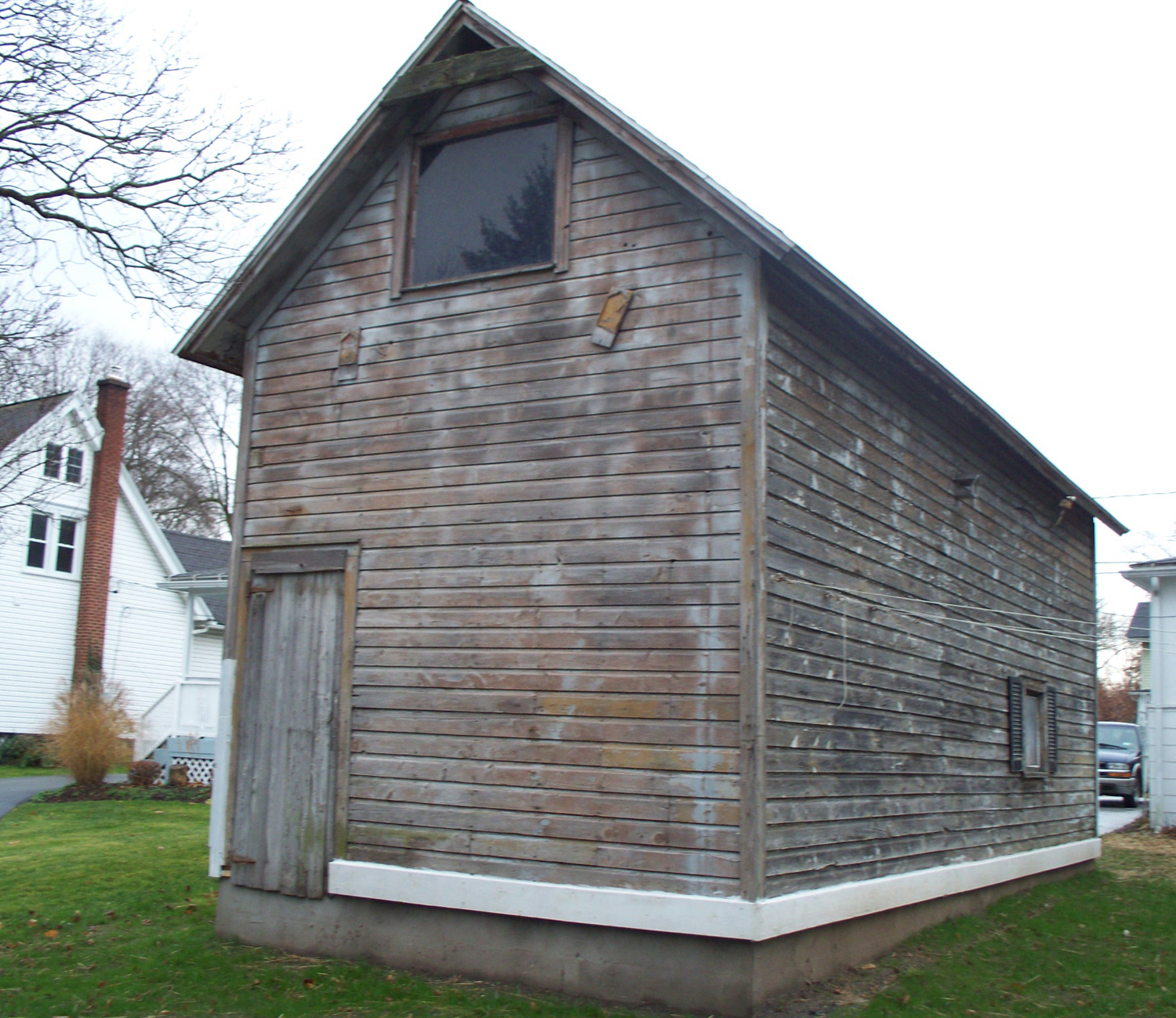 Getting the old barn back into shape was not going to be cheap or easy. Lifting the barn to an upright position was the critical first piece. Come alongs were positioned on the west side of the barn and were used to winch the structure upright. When completed there was almost a two foot rise on the east side of the structure and the entire barn with its new foundation would eventually be raised almost two feet all the way around.

There is now a two foot rise on the east side of the structure at 74 Roselawn Avenue.

The old (and we think original) foundation consisted of nail kegs filled with cement which had been placed at the corners and at intervals along the walls. While the 2x12 floor boards were in reasonably good shape, all the joists under the floor were rotted through, so a new concrete floor was laid down along with the new cinder block foundation. In the loft, the major center support for the roof and the corner supports on the back wall were braced with two by fours. Then the barn got a new roof and a new overhead garage door. 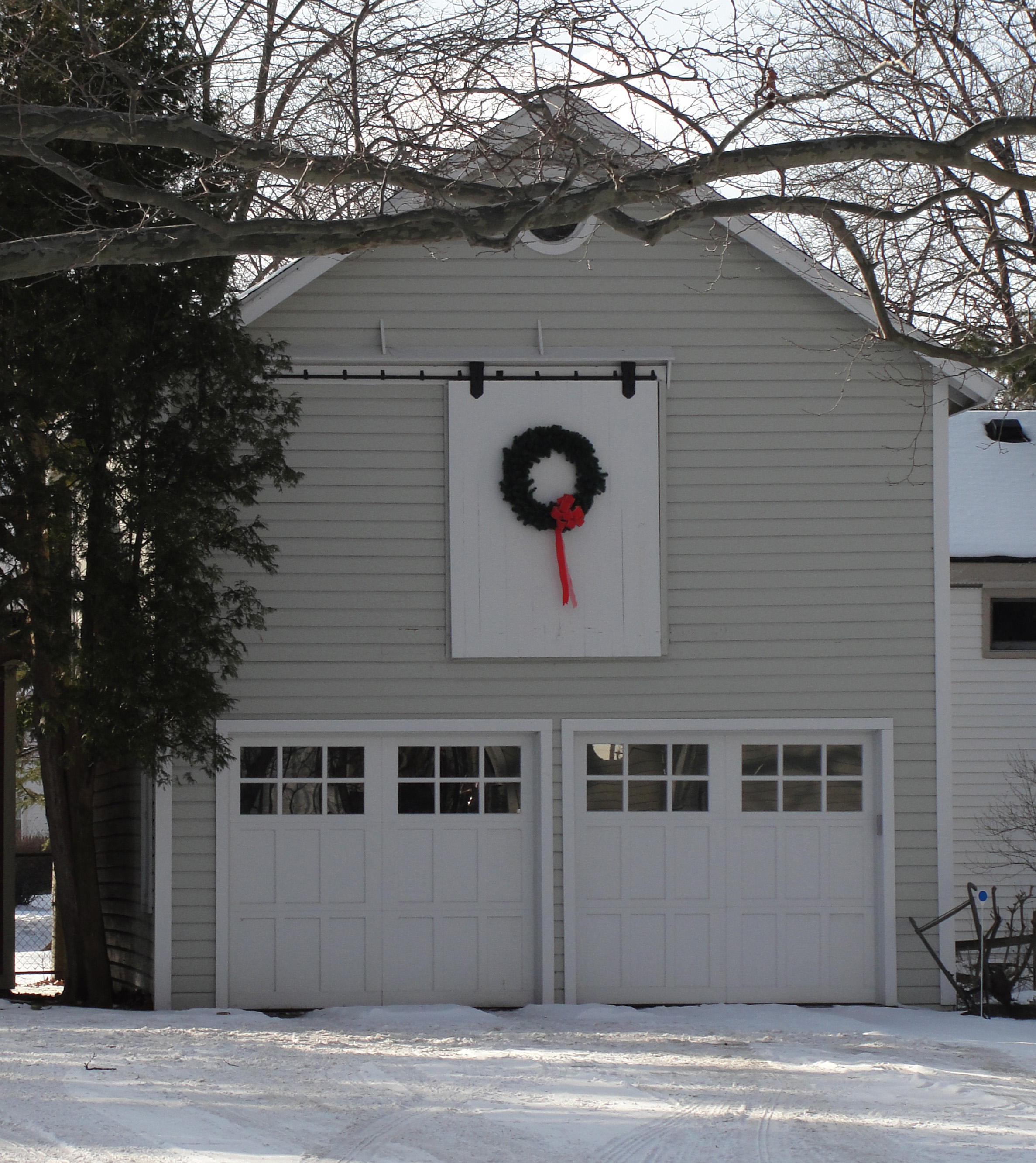 A few blocks over from the Warner house, Sandy and Ted Good at 8 West Street were finishing the renovation of their barn. They too had been confronted with a 100 year old structure in need of major repair. It was large enough to house two cars and had a spacious usable loft area, so keeping it intact was the plan, but the roof was sagging, the walls bowing and the floor buckling.

The house dates to around 1860 and the barn from a date prior to 1902. The saw marks on the interior wood and unique nails confirm a mid to late 19th century build. The barn contains its original horse stalls, there are hay drops in the loft floor, a tall horse door at the side and a hay door located at the front. A grain bin is concealed under the steps to the loft. Clearly a horse and buggy barn in its first life and a playhouse and gathering spot for children and homeowners since.

Like the Warner barn but more than twice its size, this restoration had its own challenges. The first order of business was to remove and repair the buckling floor. The boards were lifted, a large stone removed, the boards repaired and relaid. The original foundation, with sills laid down on a fieldstone base, remained intact. With that done the work shifted to the second floor loft area, and began with straightening the walls.

Come alongs were employed for this task also, the walls pulled and straightened until they were plumb. The contractor then installed a horizontal stabilizing beam through the mid-center of the barn with a vertical 6 inch square center support, anchored and braced, to the center roof in the loft. The roof and walls were further strengthened by two large horizontal cross beams at each end of the barn. With the walls and floor stabilized, the new roof went on, and overheard garage doors installed. The major work complete, the Good's are now insulating and finishing the loft area intending to use the space for family gatherings during the summer months.

Current owners of 8 West Street repaired the wood floor on the lower level and found that this rock supported the floor in the middle.

We are very grateful to Lance and Carol Warner and Ted and Sandy Good for investing their time, energy and money to restore their vintage barns. For the community, they have preserved these delightful old structures that have a story, are still useful and still here.

A horizontal stabilizing beam was installed through the mid-center of the barn at 8 West Street with a vertical 6 inch square center support. 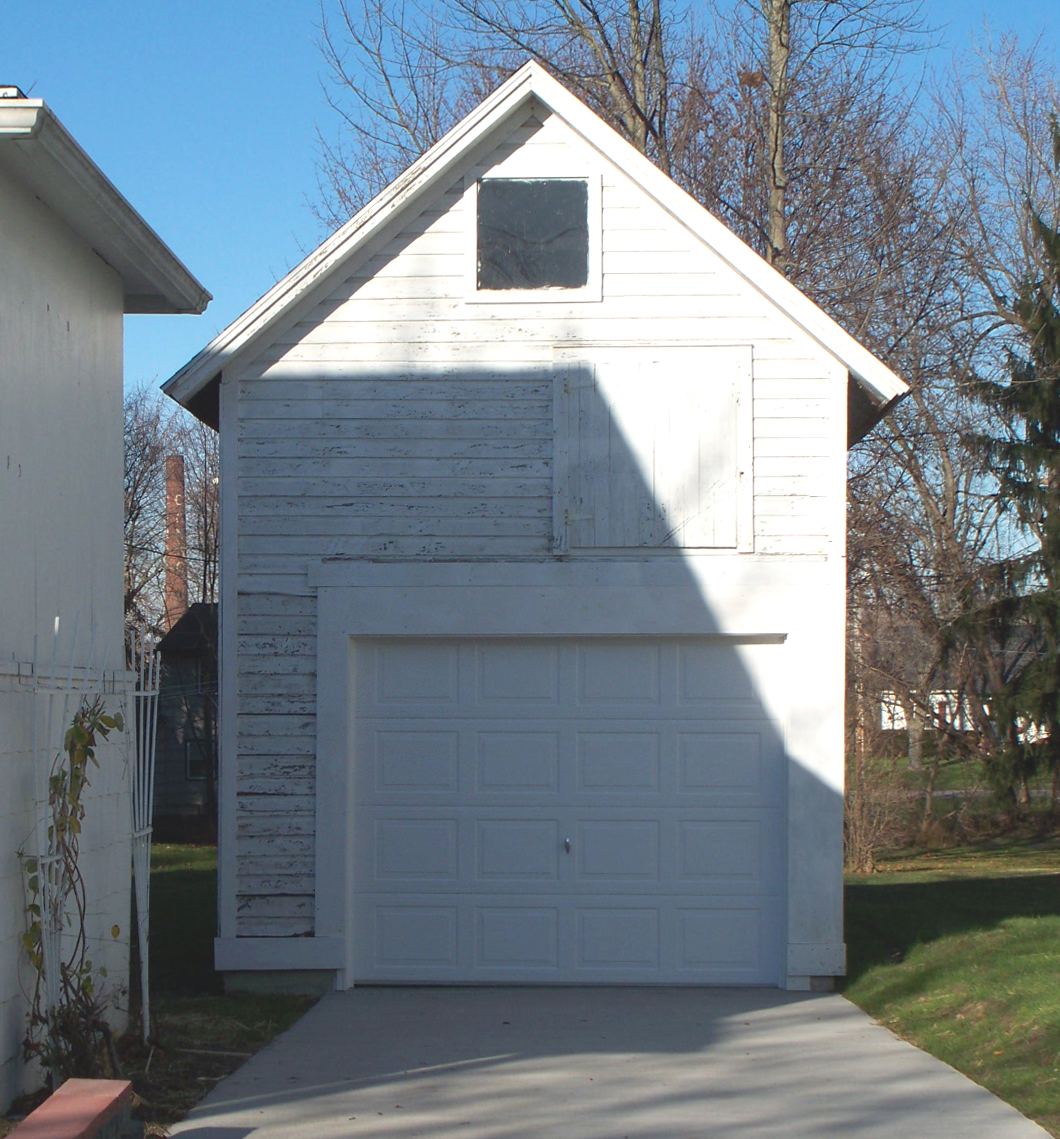 74 Roselawn Avenue after straightening and repair of barn.

Hay drops are visible in the loft floor and a hay door is located at the front end of the barn at 74 Roselawn Avenue. 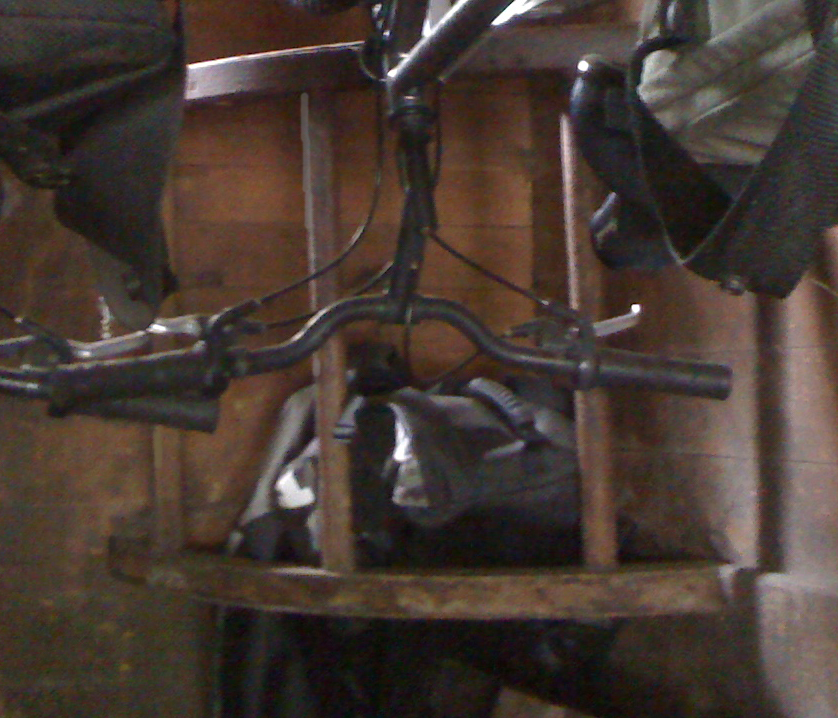 The carriage barn at 8 West Street has a hay feeder in one of three stalls. 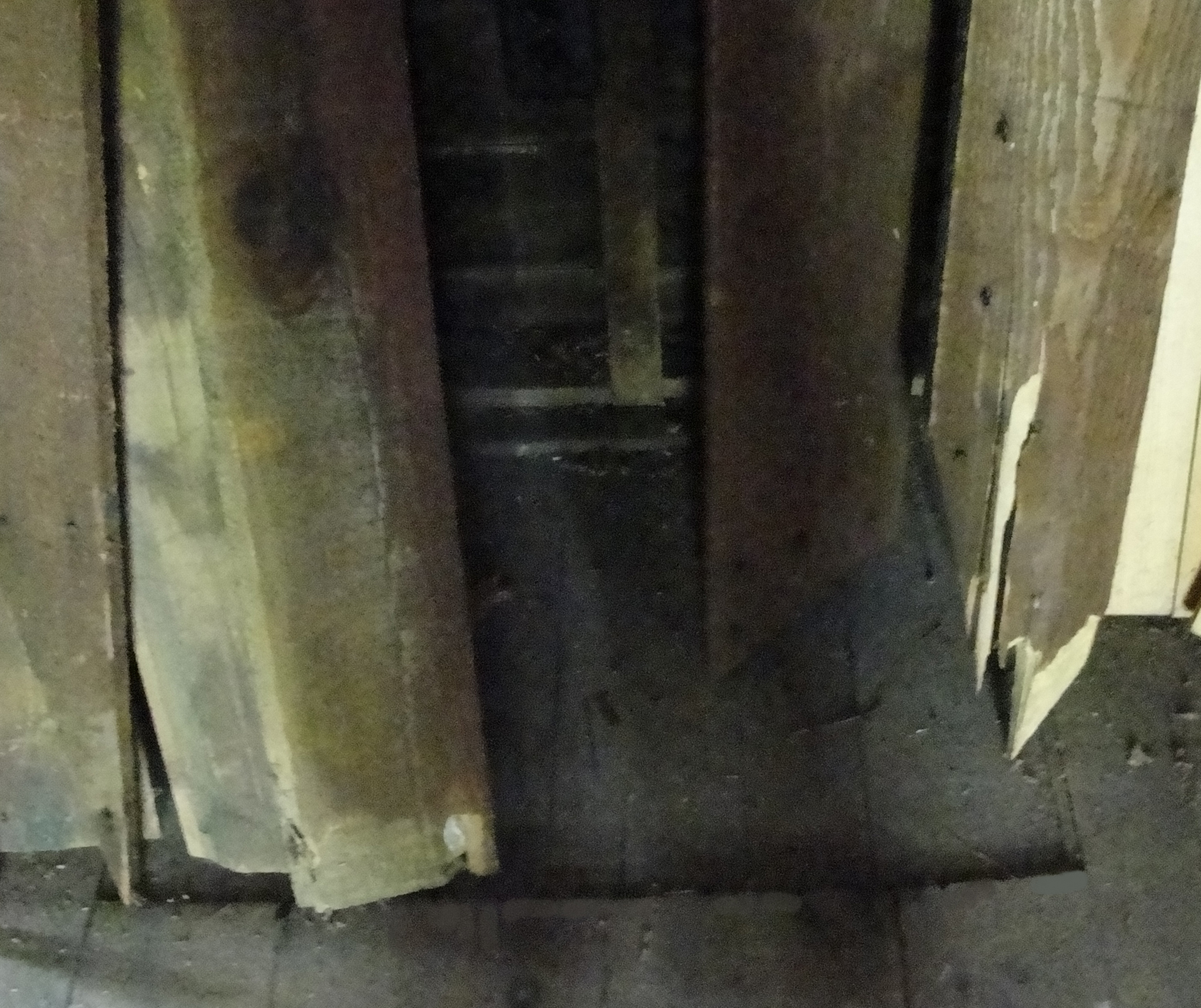 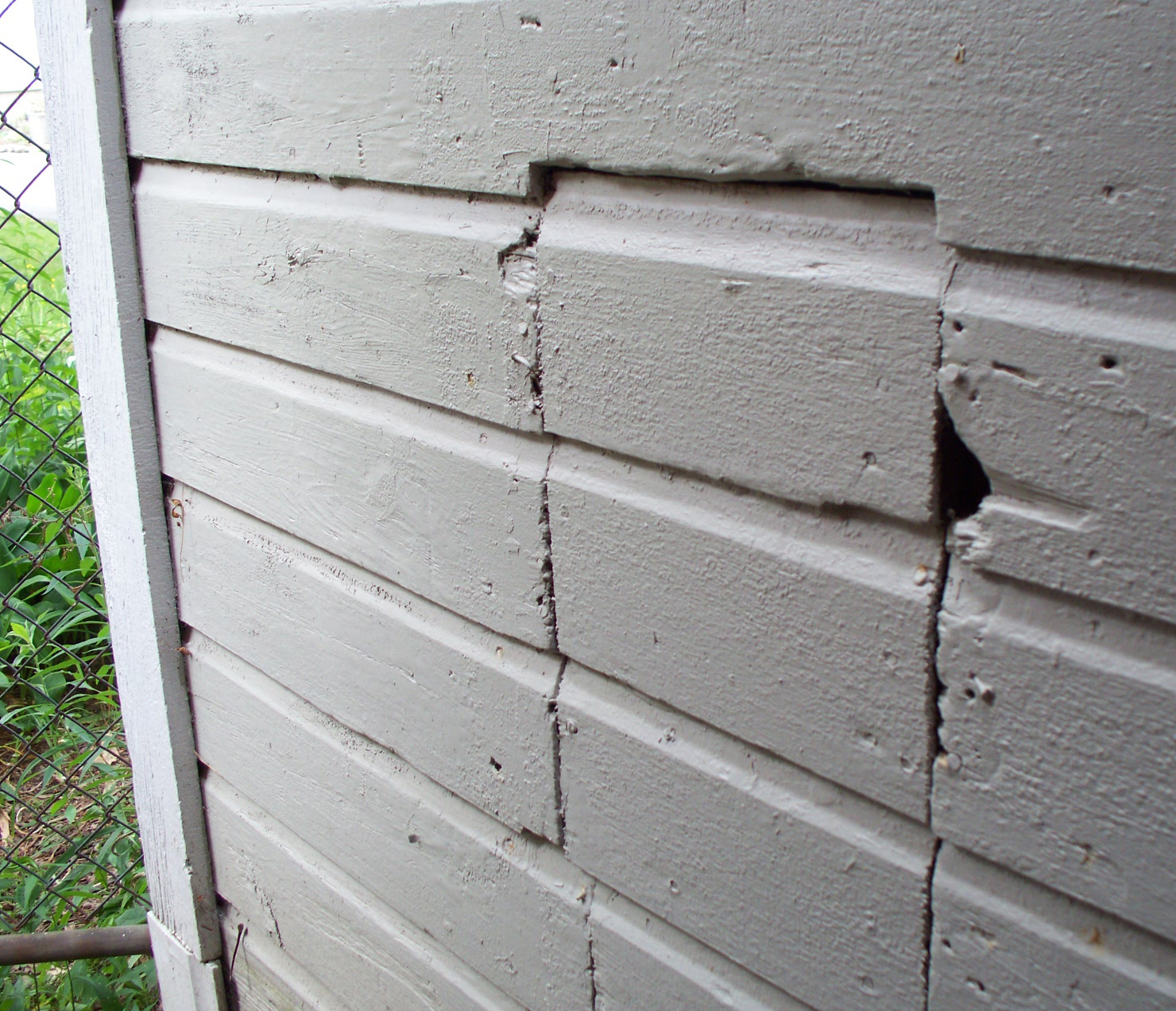