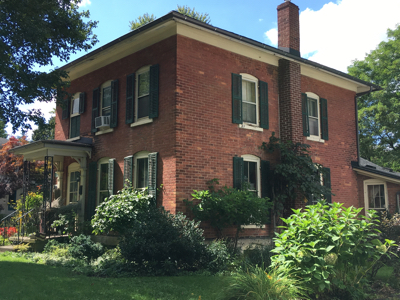 In 2019, the Fairport Historic Preservation Commission (FHPC) designated the Filkins – Templeton house at 160 South Main Street a local landmark. It was built on the corner of South Main and George Streets by George S. Filkins in 1875.

The most common type of Italianate have the box-shaped form with hipped roof and window fenestration with three openings across the façade.

The house is a typical Italianate style with a 2-story square box-shaped form with a low-pitched hip roof with wide overhanging eaves. The home met the criteria for designation because of historic interest, personages, architectural style and is a recognizable feature of the neighborhood.

The second half of the 19th Century was a time of industrial, commercial, and residential expansion in Fairport. In 1853, the New York Central Railroad line was built through the village, a short distance north of the Erie Canal. The presence of the railroad was significant to Fairport’s continued growth. 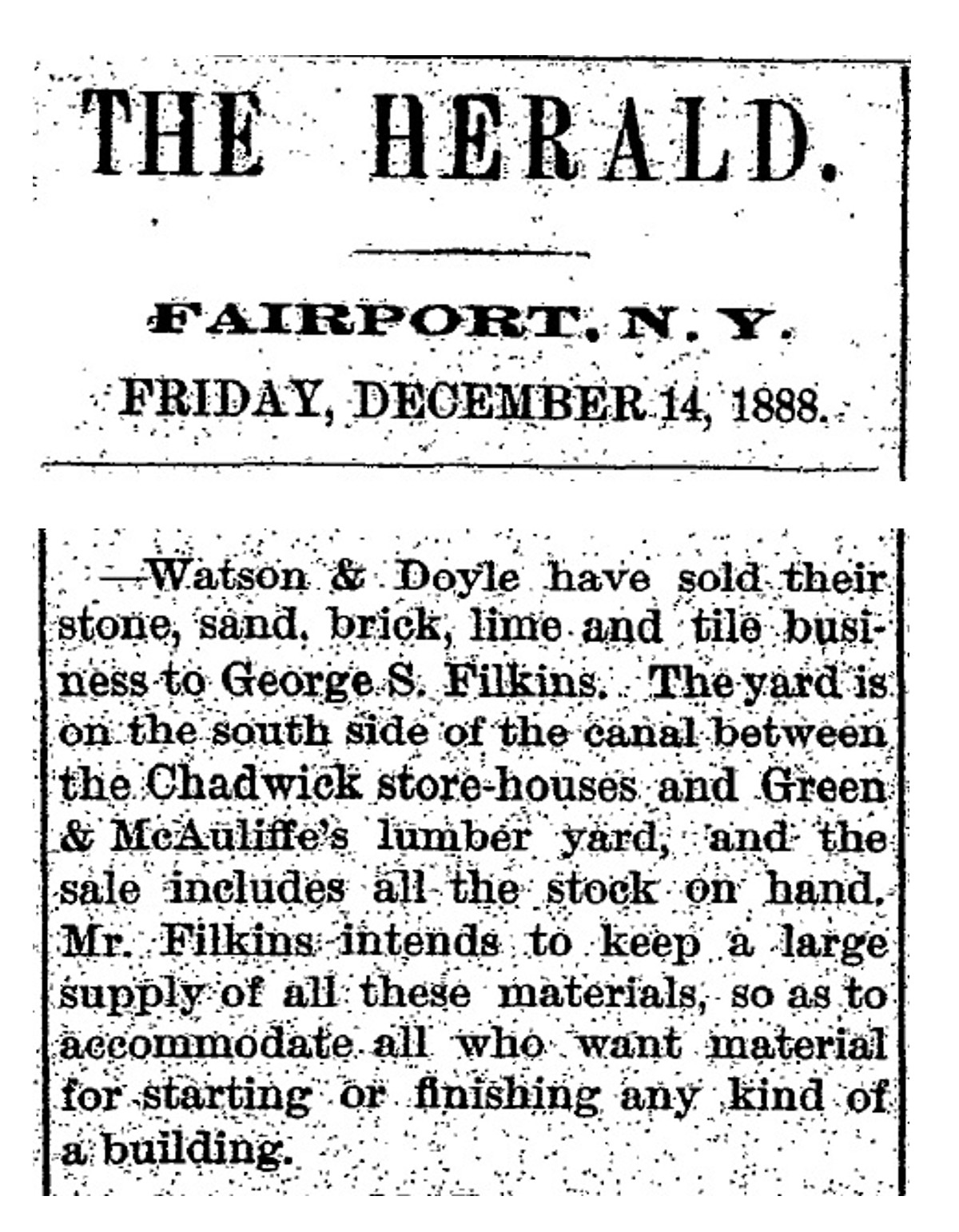 Industry boomed: factories clustered near the junction of the canal, railroad, and Main Street manufactured baking soda, boxes, lumber, carriages and wagons, barrels, silk thread, and candy, among other products.

The village’s success is reflected in its rapid population growth: from 200 residents in 1848, to a population of 1,000 in 1867, then nearly doubled to 1,920 by 1880. Reflecting the growth in population, Fairport was formally incorporated as a village in 1867.

Watson & Doyle have sold their stone, sand, brick, line and tile business to George S. Filkins. "Mr. Filkins intends to keep a large supply of all these material, so as to accomidate all..."

George Filkins built this house soon after Fairport became a village. The brick came from a kiln on Ayrault and Jefferson Avenue. In 1889 G. S. Filkins purchased the stone yard of Watson & Doyle advertising the sale of “quarry stone, sand, brick, tile, quick lime, cement and all mason supplies”. The yard was located on the south side of the canal between Chadwick store and the Green and McAuliffe’s lumber yard. 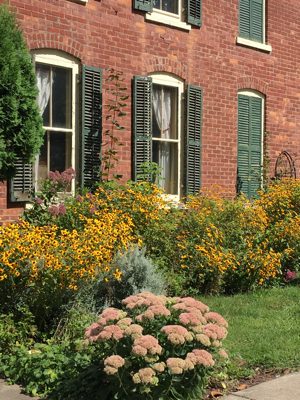 The first owner Paulina Westfall purchased the home in 1875 and lived there with her husband Henry. She died in 1900 at the age of 85. Her husband Henry lived there until 1903. The home was sold in 1907 to James H. Robbins, who died in 1921. He and his wife Frances were candy makers.

The house changed hands several times until it was purchased c.1919 by Jacob DeCoster. He sold the home to Lottie and Roy Coon in 1924. The home was owned by the Coon family for over 60 years. The current owner has resided there for over 30 years.

George S. Filkins, a Civil War veteran, lived briefly on the Hulburt Road farm when it was located at Hulburt and Brooks Avenue (Potter). His family resided there for many years.

In the 1870's George began development of a large tract of land, now known as Filkins and George Streets. He liked working with brick and is credited with building 160, 164 and 166 South Main Street, 53 Roselawn Avenue (a locally designated property), 72 East Street, 35 Filkins and the “Filkins Block” at 45 South Main (Fairport Savings Bank). 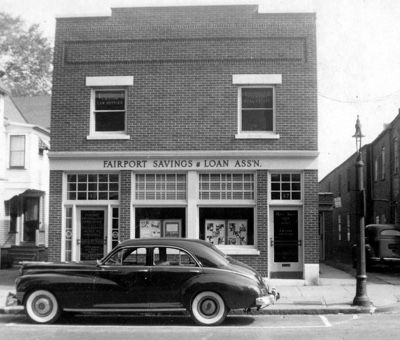 He also built the Seeley Block at the corner of South Main and Cherry Streets (West Ave). George made important contributions as an early developer in the village. The family home on Hulburt was moved to the top of the hill in 1953. The home at 110 Hulburt was locally designated and named the Filkins – Carroll house to recognize his contributions to our community.

This home has many features of the Italianate style of architecture popular between 1840 and 1885; it is a 2-story building with low-pitched roof and wide overhanging eaves, tall narrow windows, segmental arched window and door surrounds. The most common type of Italianate (about 1/3 of them) have the box-shaped form with hipped roof and window fenestration with three openings across the façade.

The 2 over 2 window glazing is very common in this style and for the first time the arched or segmental arch windows and surrounds were incorporated. (note, the Romantic period also included Greek Revival, Gothic and Exotic Revivals and Octagon styles)

The main windows have a segmental arch surround with 2 coursed of rowlock brick. The windows have operable wood louvered shutters.

The front door has a segmental arch surround with 2 courses of rowlock brick. The door is rectangular with wood panels below and 2 arched window panes on the upper half of the door. The door from the home to the side porch is identical to the front. 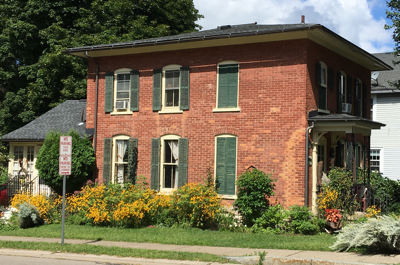 The window fenestration has three openings on the east and south and 2 on the north side. The windows on the ground floor are tall and narrow. 2 of the openings on the south side are faux windows finished with shutters. The inside has plain walls of plaster and lath. These faux windows are original to the 1875 building. It appears that it was done for balance and symmetry.

Two of the openings on the south side are faux windows finished with shutters. The inside has plain walls of plaster and lath.

The pattern of the brick wall is a traditional running bond consisting of all stretchers. There is stone water table at the base of the wall between the brick and foundation materials. The 10” walls are constructed with air space or a cavity between 2 layers of brick.

The location on Main Street and the corner of George Street makes this home very visible to all that travel through the Village. To the north is 164 South Main Street, which has long been considered a sister house to 160 because they share many of the same Italianate features and were built by George S. Filkins. 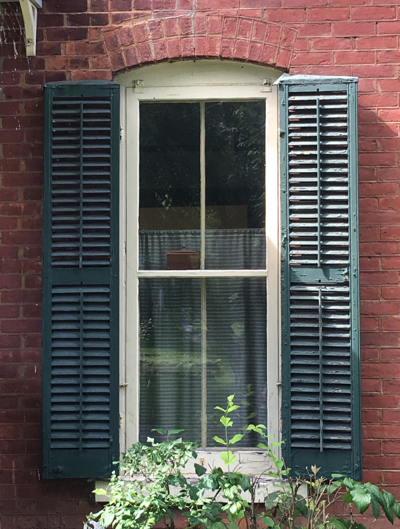 The main windows have a segmental arch surround with 2 courses of rowlock brick. 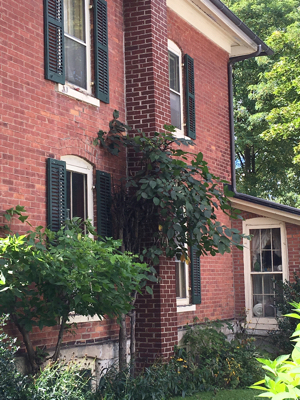 There is an early addition on the back of the house that was expanded later for a kitchen and side entrance.

Filkins liked working with brick and is credited with building this home at 35 Filkins Street as well as 164 and 166 South Main Street, 53 Roselawn Avenue , 72 East Street,  and the “Filkins Block” at 45 South Main (Fairport Savings Bank). 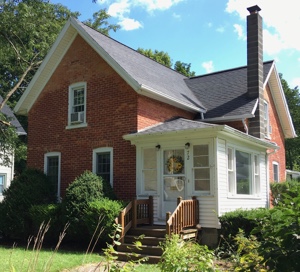 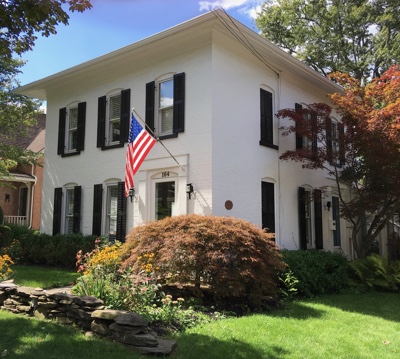 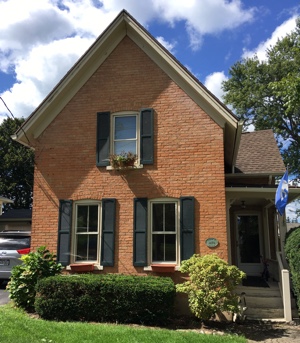 The house at 53 Roselawn Ave. was built by Filkins. Note the familiarities with 166 S. Main & 72 East St. This house is also a local landmark named the Silver House & Carriage Barn.

For more information about George S. Filkins visit George Filkins: His Impact on the Village of Fairportand the Filkins in FairportHouse Tour.