The Greenvale Rural Cemetery is described in a 1936 article in The Herald Mail as, "...the first burying plot in our village, lies on a slight rise of ground between East Church Street and the Erie Canal. This plot, which was taken from the farm of Oliver Tomlinson was opened in 1825. It is the largest (in 1936) as well as the oldest, and an atmosphere of peace and restfulness soothing to troubled spirits pervades it."

The sign for the cemetery states that it was established in 1820, but all the documents that can be found indicate 1825. 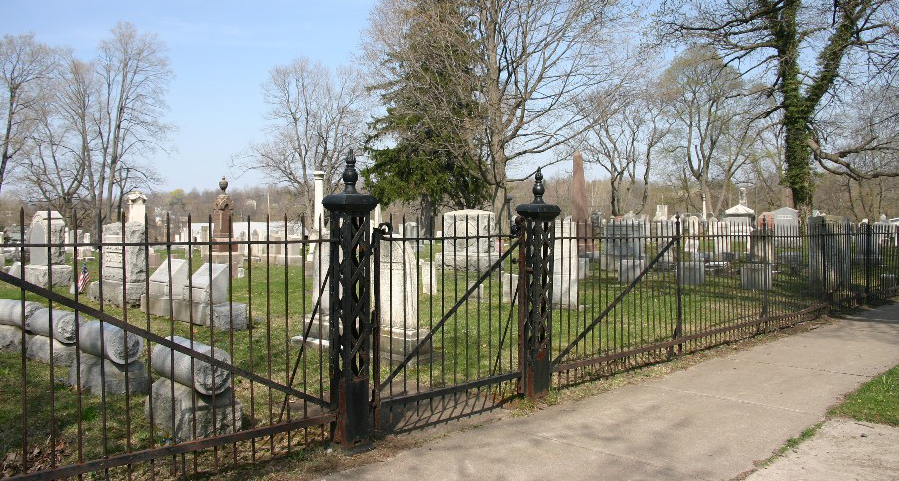 Today the cemetery is surrounded by residences, churches and a vacant lot by the canal. It can be seen by all that enter the village from the east. Many of the stones, the Victorian style iron fence and the large trees are all visible from the street.

The Greenvale Cemetery has a Victorian style wrought iron fence with a beautiful gate that runs the length of East Church Street.

Over 1000 are buried in Greenvale - farmers, public servants, veterans and entrepreneurs who contributed significanly to the life and growth of the area.

Like most cemeteries, Greenvale reflects the customs and culture of the day. Styles and shapes of memorial markers followed the architectural periods of the time. You will find Victorian obelisks, Gothic Revival, Art Deco and Modern gravestones. 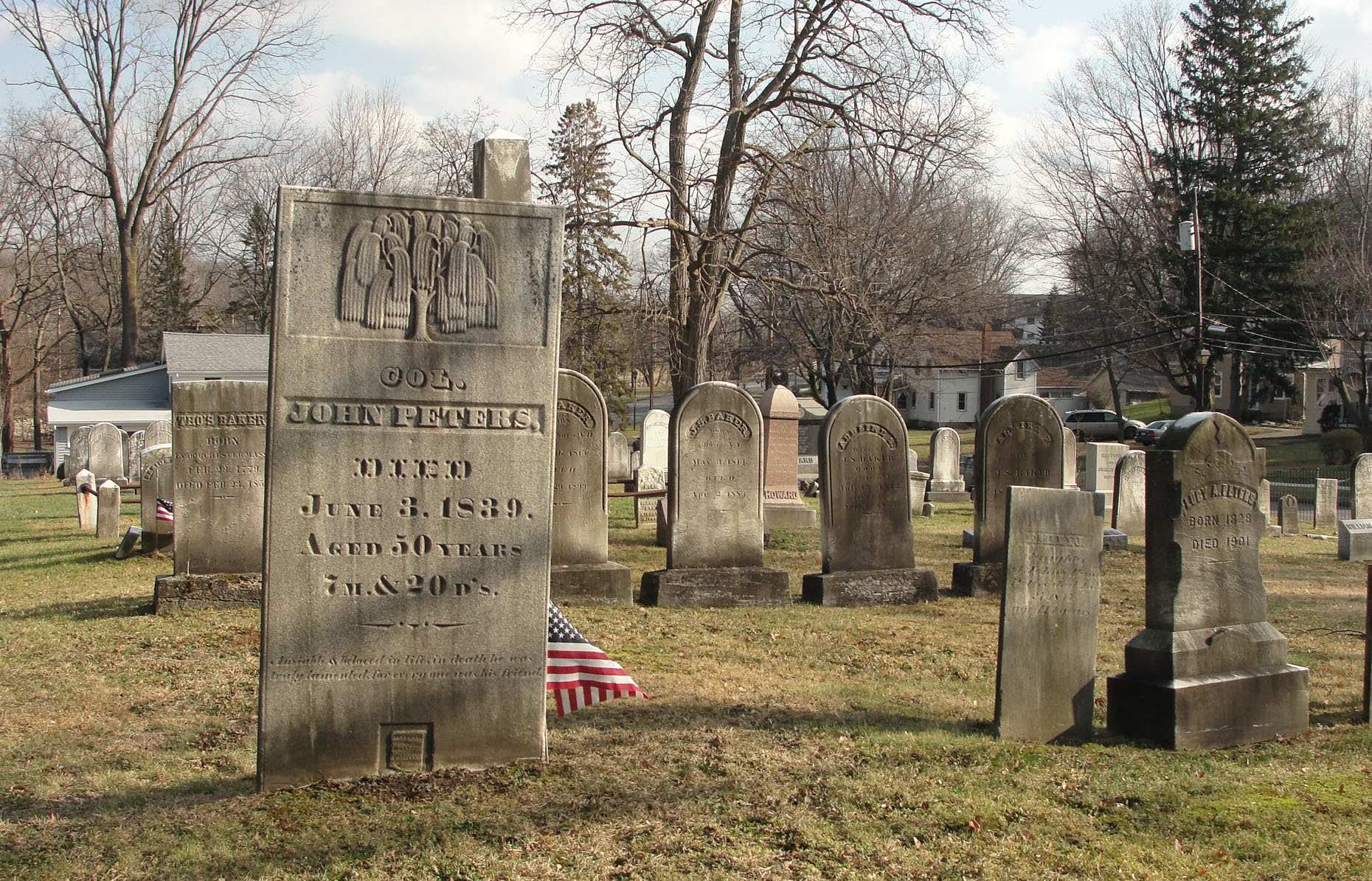 Prior to the 1850's many Fairport residents went to Canandaigua to get gravestones. Later they might have purchased from Fairport's own marble worker, W.H. Vance. He was in business on Main Street circa 1850. Residents could also order stones from companies like Sears, Montgomery Ward and Monumental Bronze.

Many historically important people and their families are buried in Greenvale. This is the plot for Col. John Peters one of the nine men who owned the land that became the village of Fairport. 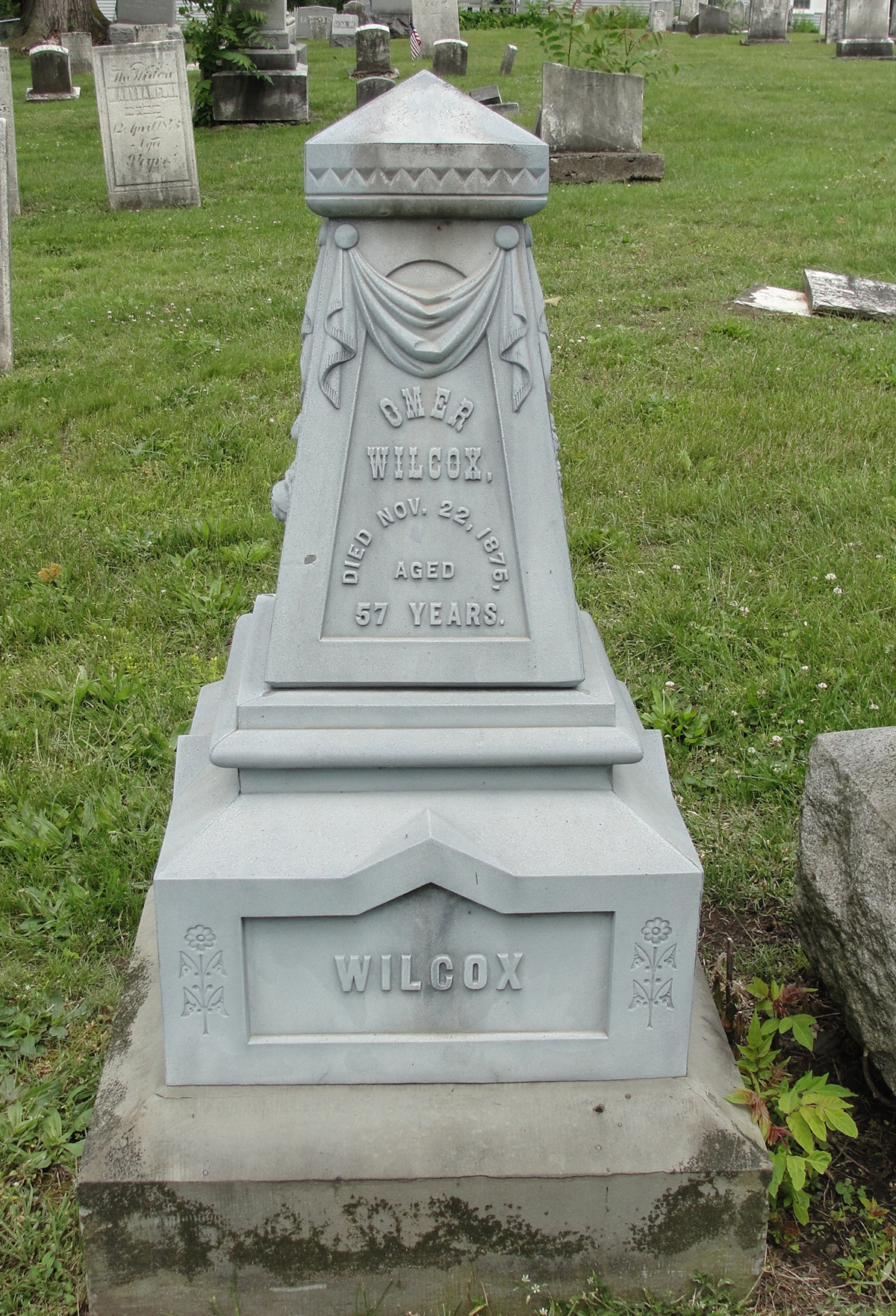 The materials used ranged from marble to granite, carved, to cast in zinc. There are at least three large cast zinc markers, one of which was ordered from Sears. The gray-blue coloring can identify them and if you tap the "stone" it sounds hollow.

The gravestone materials in this cemetery range from marble to granite, carved to cast in zinc. There are three large markers made of cast zinc. They are hollow and have a blue-gray color.

You can find a variety of symbols in the cemetery that have a range of meaning and represent the culture and religion of the departed. Among them are weeping willows, urns, angels, lambs, flowers, clasped hands, pointing finger, doves and fraternal organizations. 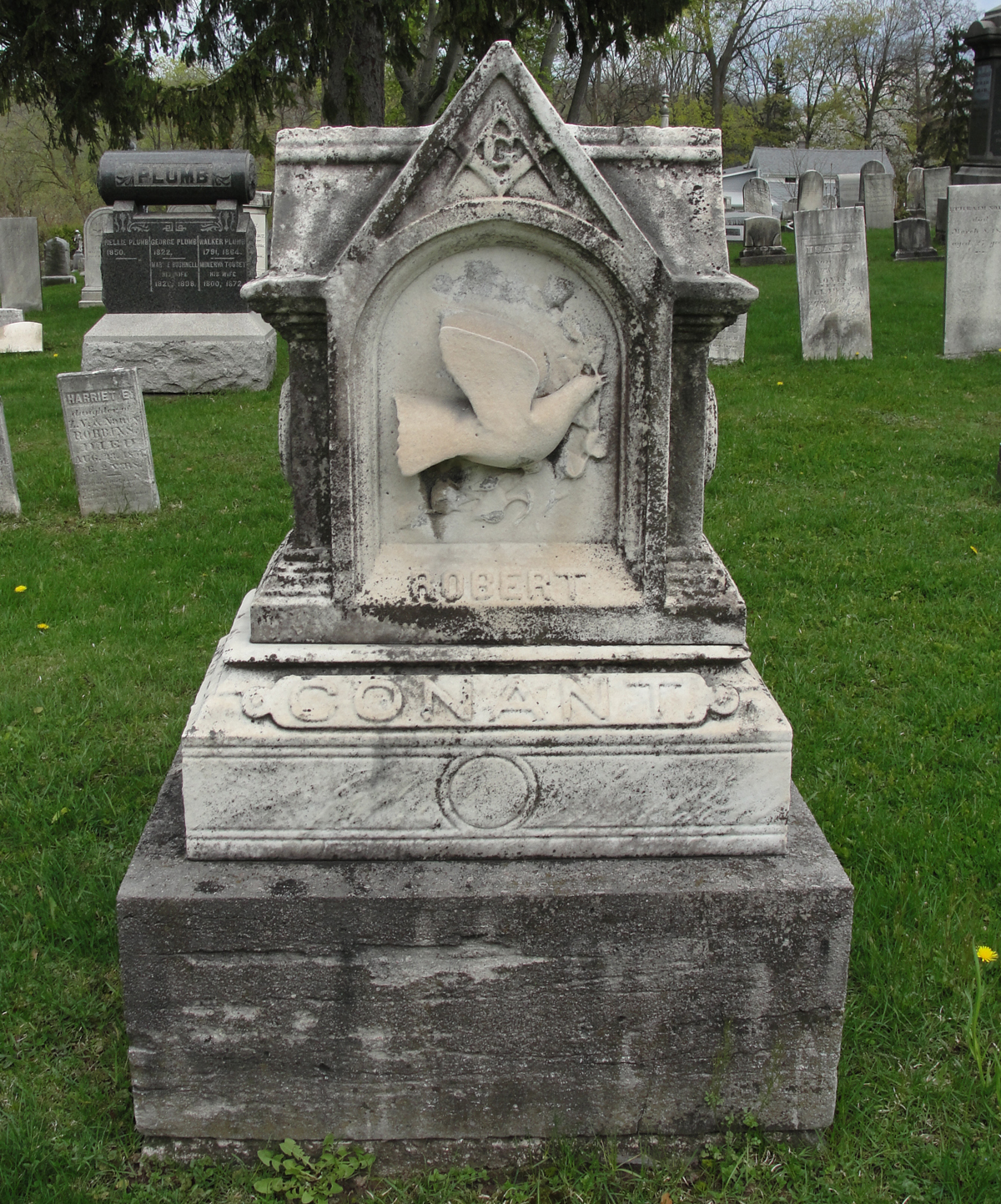 Symbols are often used to represent the culture or faith of the departed. The dove is a symbol of resurrection, innocence and peace.

This large village cemetery, with its variety of markers and numbers of town and village "movers and shakers," offers a significant look into the history and heritage of our community.

The Fairport Historic Preservation Commission (FHPC) designated the Greenvale Rural Cemetery a historic landmark in the village of Fairport in 2012. 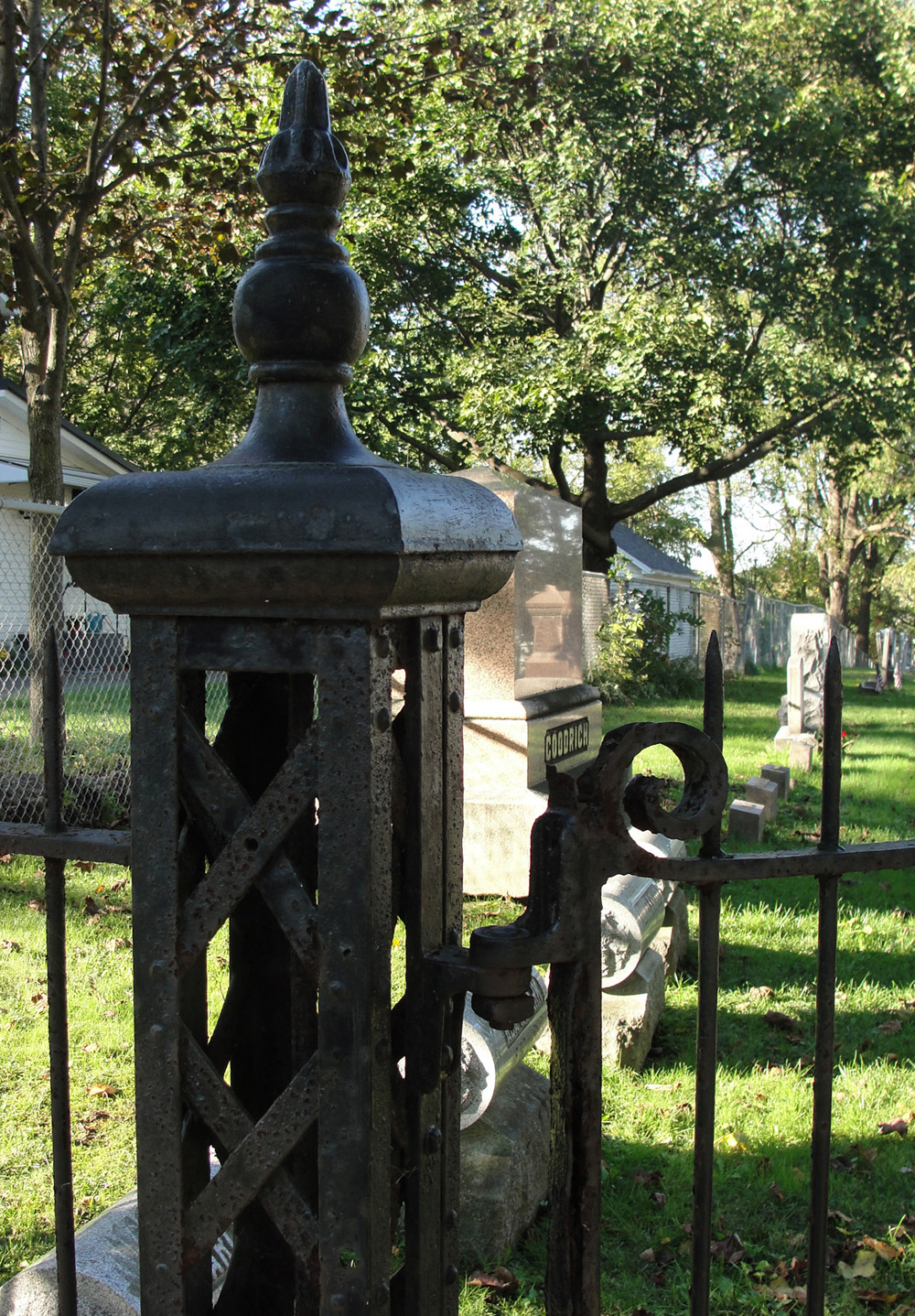 The cemetery has a wrought iron fence along the East Church side. 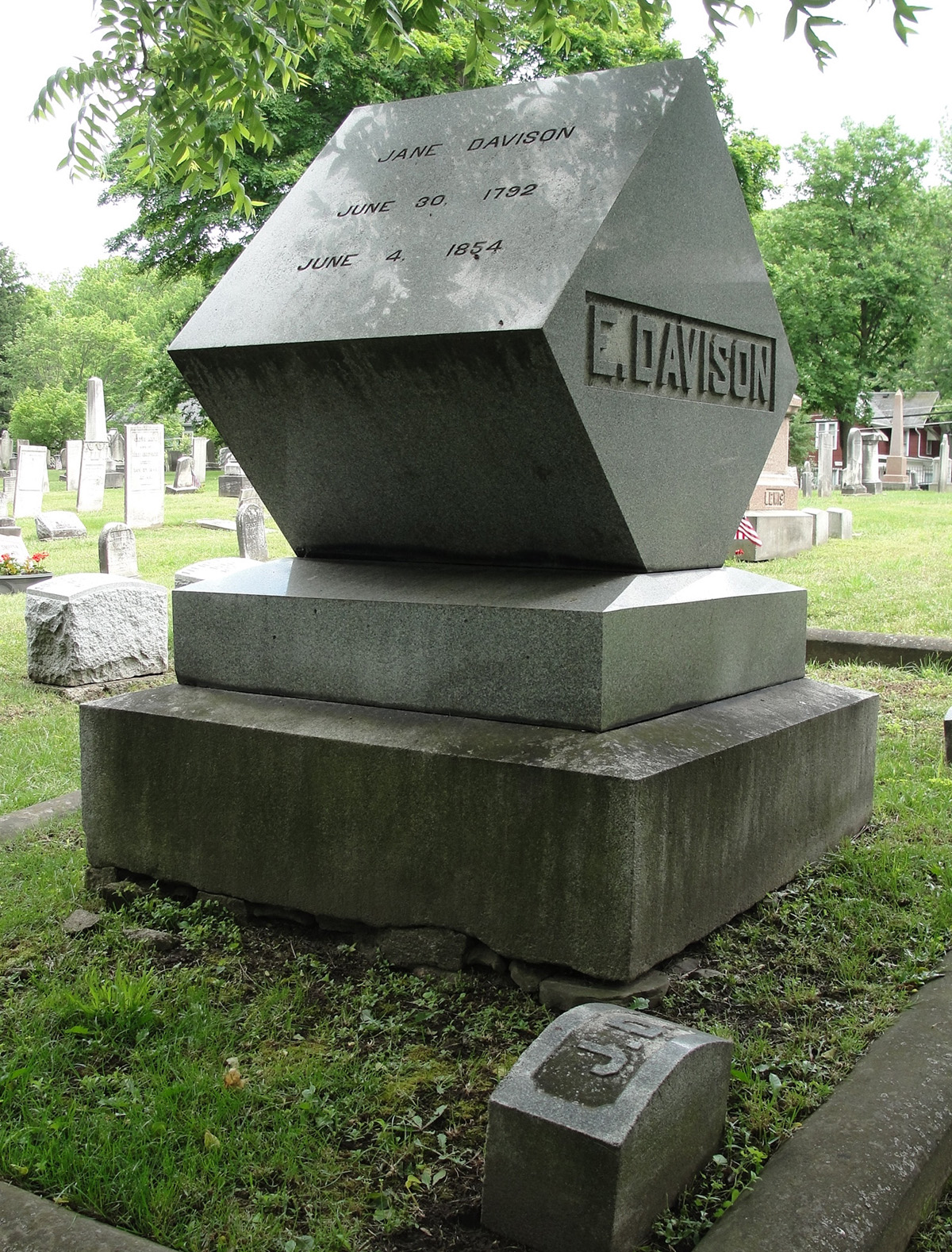 The styles of grave markers often reflects the architectural styles of the day. 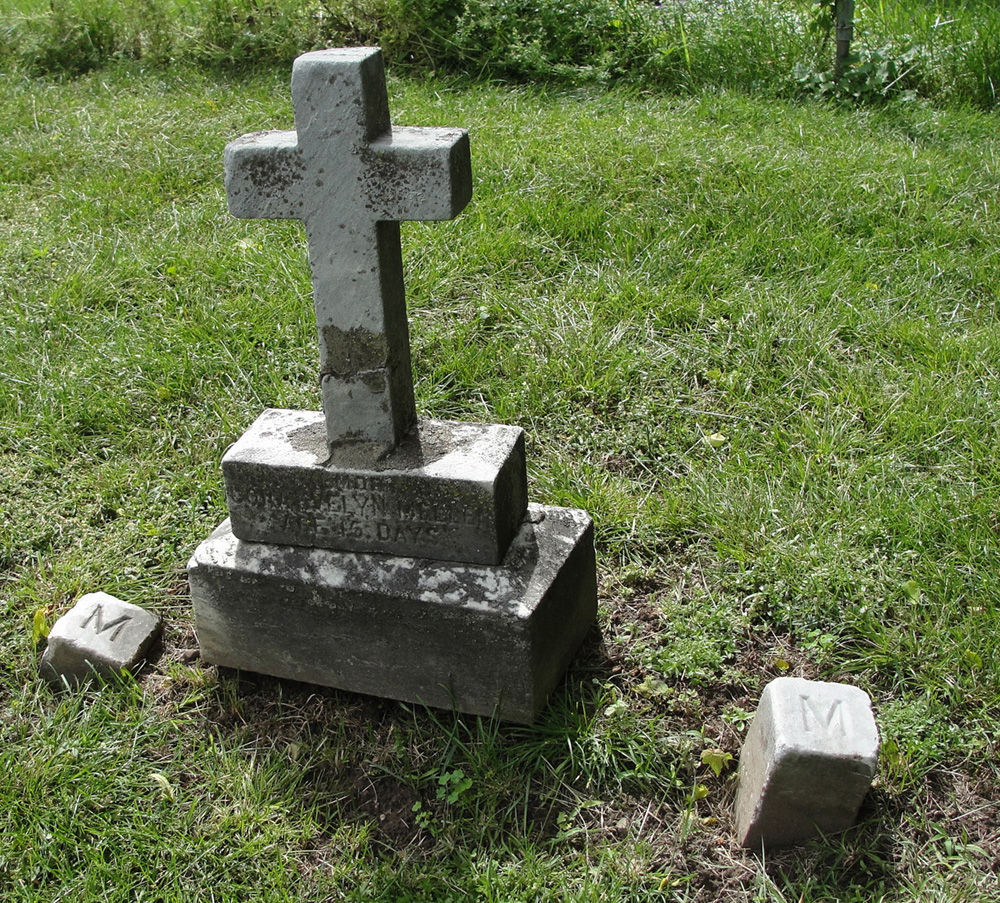 This cross marks the grave of a young child. 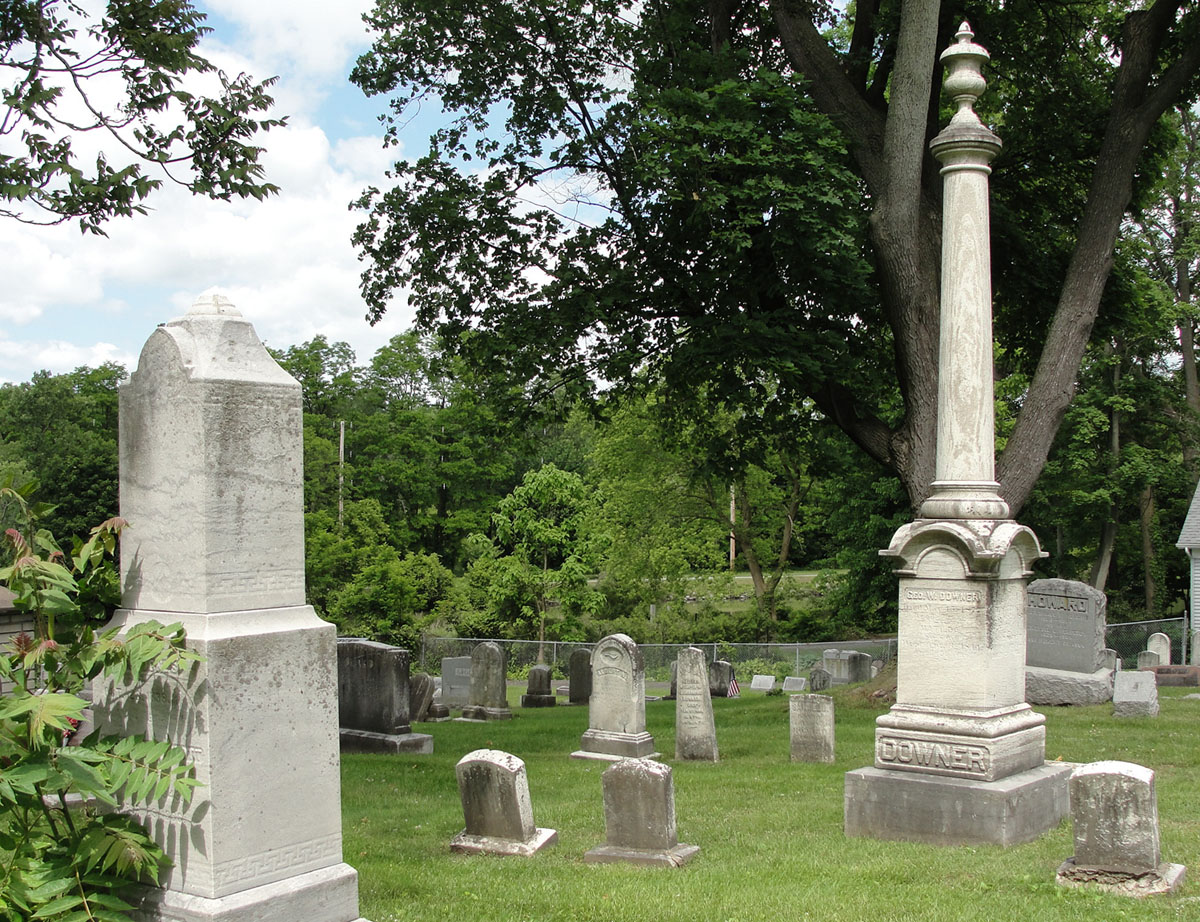 The Downer stone is an example of a Victorian obelisk.