In November 2010 the Fairport Historic Preservation Commission designated the Fairport Federal Credit Union building at 70 South Main Street, a historic landmark. From a historic perspective, the property is known as the John E. Howard house. 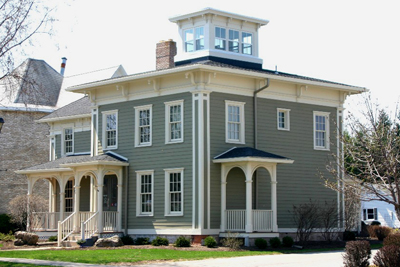 This house served as a physician’s office for 84 consecutive years.

The house was originally built in the 1840’s or 1850’s. The Landmark Society survey of 1976 indicates that the architectural style of the house may have originally been either Federal or Greek Revival, but was altered to its present Italianate design soon thereafter. The building features many strong Italianate design cues, including widely overhanging eves with brackets in a drop ball design, gracefully arched porch supports, and a rooftop cupola. The Fairport Federal Credit Union implemented a sensitive rehabilitation to the exterior of the building a few years ago, taking care to maintain important historic elements of the structure.

Gillette’s 1858 map of Monroe County indicates that John and Lorenzo had houses next door to each other on South Main Street, at approximately the area where the current entrance to the Village Landing is today. Shortly thereafter, John and his wife Louisa relocated to the structure we now recognize as the Fairport Federal Credit Union building. Perhaps this is when the house was enlarged and changed to its current Italianate design.

In 1867, the Village of Fairport was incorporated, and in 1868 the first village elections were held. John E. Howard was elected to serve as a Trustee on the first Fairport Village Board. Mr. and Mrs. Howard were also very active in the Fairport Congregational Church, and were highly respected in the community.

The Howard’s daughter, Sophia also played a historic role in early Fairport. Born in 1844, Sophia attended Philadelphia Medical College, a renowned school specifically for female students. After graduation, Miss Howard worked for a time in the hospitals of Boston, gaining experience in her profession. She eventually practiced in Canandaigua, and later, in Auburn. In Fairport, she holds the distinction of seeking elected office in the Fairport School Elections of 1881. In this election, women were allowed to run for office and vote for the first time. Sophia E. Howard ran for the position of Trustee, as did a Mrs. Griffith. While both lost, each was a true pioneer, as the 19th Amendment to the Constitution, granting women the right to vote, did not come into existence for another 39 years.

The John E. Howard house was sold in 1901 to Dr. Charles White, and his wife, Dr. Francis Hulburt White. After graduating from Michigan University in 1900, the Whites became fixtures in Fairport for many years to follow. Their offices were located on the first floor, and living quarters were on the second floor. Charles served for many years as the Village Health Officer. After her husband died in 1933, Dr. Francis Hulburt White continued her medical practice in Fairport until her death in 1943.

In about 1940 Doctor John N. McEachren gained ownership of the house and offices at 70 South Main Street. Like his predecessors, his medical practice and family home were located in the house. For the next 45 years, Dr. McEachren served countless members of our community. Incredibly, the house served as a physician’s office for 84 consecutive years.

The Fairport Federal Credit Union has since owned the building, and has demonstrated great sensitivity to the responsibility of owning this local landmark. In the early years of Fairport, residences lined South Main Street, from the lift bridge toward Church Street. The John E. Howard house is unique, as the closest house to the lift bridge, still standing, from this long ago era. 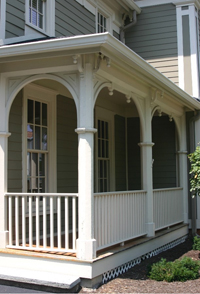 Brackets under wide overhanging eaves in a drop ball design.