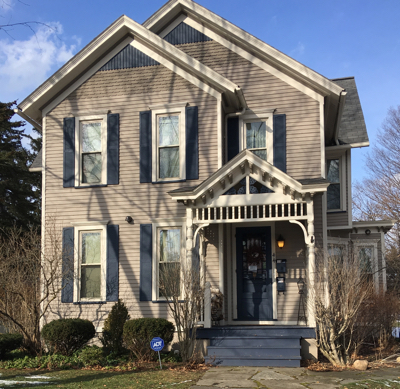 The house at 44 West Church Street was designated a local landmark by the Fairport Historic Preservation Commission (FHPC) in 2018. The home was built in 1884 by Henry Harvey Howell. His son-in-law Judge Lee resided there until his passing in 1956. The home met 4 of the 5 criteria necessary for designation: special historic interest; historic personages; architectural style; and a feature of the neighborhood.

History & Ownership
Henry Harvey Howell (1837 – 1910)[1] who built 44 West Church in 1884, was the son of Jacob W. Howell who in 1853, bought a property in Lot 17 in the northwest quadrant of Perinton (Howell Road). The farm was located on the north side of Macedon Center Road, near Budlong Road (now Perinton Parkway). Henry was sixteen at the time and Fairport was his home, except for a period of time when went out West during the California Gold Rush of 1848 (’49).

Documentation and a newspaper article indicated that Henry spent nine years from 1859 to 1868 in California, but the Federal Census indicates he was in California as early as 1852. The California Gold Rush (1848 – 1855) captured the popular imagination and led directly to the settlement of California by Americans and the rapid entry of that state into the union in 1850. It also stimulated worldwide interest in prospecting for Gold.[2]

Most interesting about Henry Howell’s adventure is found in a story published in 1909[3] with the title 50 Years Ago, Fourteen Fairport Youths Started to California Seeking Wealth. The story was told by Henry and recalls that fourteen young men from Fairport traveled, by boat in steerage around the coast of South America to California. The party included Henry and his brother John. John had made the trip before and was the leader of the group.

This trip was one of five trips John would take to the West. When the group of fourteen reached their destination nearly all the boys went to work receiving $50 a month, with board included. Despite the excitement over gold only one or two actually prospected for gold. Henry returned to Fairport in 1868, with a reputation as an expert quartz miner.

Henry Howell who returned to Fairport after mining in California engaged in farming for several years. It appears the he and his brother John purchased the Milton Budlong farm.[4] He soon moved into the Village of Fairport where he lived at 12 West Church Street. He ran a market on West Avenue, was a policeman and a sheriff’s deputy. He was a member of the Board of Education, a Tax Collector and was a Water Commissioner. For 20 years, Henry served as treasurer of Fairport Lodge 476 F. & A. M (Mason). December 20, 1871[5], he married Caroline (Carrie) M. White (1850 - 1914)[6] He built/or had built 44 West Church in 1884, and he and his wife lived there until their deaths, in 1910 and 1924 respectively.[7]

When Henry Howell died, his wife Caroline (Carrie) remained in the home. It is reported that their daughter Mabel Ora Howell (1882–1950) took care of her mother for many years. At some point in the early 1900s, or possibly after her father’s death, the house was divided into two apartments.

In 1914, Mabel married Raymond James Lee (1881 – 1956). The couple lived at 44 West Church and had a daughter Dorothy (Janet). She also resided in the home. In 1976, Janet and husband Frazier Pruitt were interviewed by the Landmark Society of Western New York for the survey of the village. Using that date, the Howell family lived in the home for over 90 years.

Judge Lee, a Syracuse Law School graduate, practiced law in Fairport for 50 years, he served as Judge for over twenty years and Town Supervisor for twenty years. At the time of his retirement in 1954, he was the longest serving Town Supervisor. He was first elected Town Supervisor during the Depression in 1936. He took over a community which had 25% of its population on relief. The town had borrowed $68,000 from Monroe County to help meet those expenses. He managed to make the town financially sound and paid the loan back by 1945.

Born in 1881 in Mendon, his widowed mother sold the family business and he came to Perinton when he was 6. He graduated for Fairport High School in 1900 and attended Syracuse University obtaining a degree from Syracuse Law School in 1906. He ran his private law practice from the Clark Building on Main Street for 50 years.

“Judge” Lee was appointed town justice to fill a vacancy in 1914. He remained in office for the next twenty years.

During Lee’s tenure as Supervisor, a new zoning law took effect. The town began a new assessor system, established a consolidated health district and built new roads and improved the old roads. The Town offices were remodeled, a storage facility was built, and new election and fire districts were added.

By 1941 he’d began an effort to find a youth center for the town. A year later he organized volunteers who raised money for playground equipment. The group became the Fairport Youth Commission which was the start of our current Perinton’s Recreation and Parks Department. In 1945, the commission opened a teen center called, “The Nook” in the carriage barn at Potter Park. (53 W. Church)

Lee was known as a progressive. In Perinton he was an early advocate of consolidation of health-care and youth programs. On the county level, he supported the airport purchase plan, the City-County Civic Center, metropolitan planning and the integration of city and county functions. He was president of the Monroe County Fair and Recreation Association, the group that staged the County Fair each year.

He was a member of the Rotary and Bar Association, past master of Fairport Masonic Lodge No 476, a Shriner and director of the Perinton Fairport Community Chest.[8] 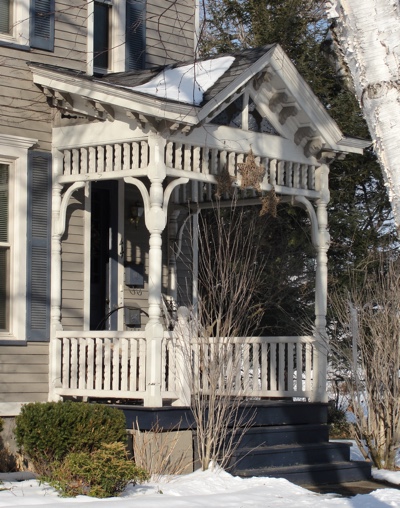 This home was built circa 1884 during the period that the Queen Anne style was becoming very popular. This style is often called an Eastlake after Charles Eastlake, an English furniture designer who utilized similar design elements in his work. There are two main types of Queen Anne styles, one is referred to as spindlework, the other free classic.

The front gable steps into 2 gables, there are descending narrow windows on the east side, likely following the interior stairway. The main windows are one-over-one double hung. Two large windows on the eastside bay and on the second floor are stationary with an upper panel with a large pane surrounded by small square and rectangular panes.

It appears that the front door is a single wood door with a large glass pane on the upper half with a similar pattern of a large pane with small square and rectangular panes surrounding it. (panes may be stained glass)

The home is located on West Church, a main thoroughfare known to have some of the most beautiful historic buildings in the Village of Fairport.

Several locally designated properties are nearby: the Eldridge House and Carriage Barn at 48 W. Church, the Potter Mansion at 53 W. Church, the National Register listed Potter Historic District, the Newman-Dean House  at 11 West Church St. and the Baptist Church on the corner of Main and Church. 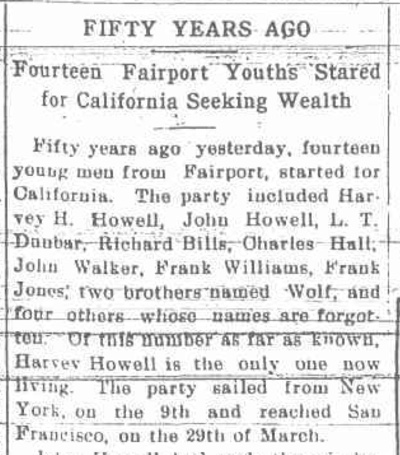 "The party sailed from New York on the 9th and reached San Francisco on the 20 of March."

The 1885 Beck & Pauli lithograph shows the cross-gable form with an east-side bay. 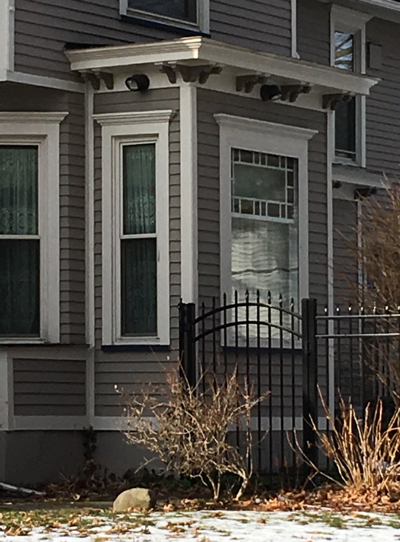 The bay in the east-side today is only 1-story. A window here has small panes or light around a larger pane. 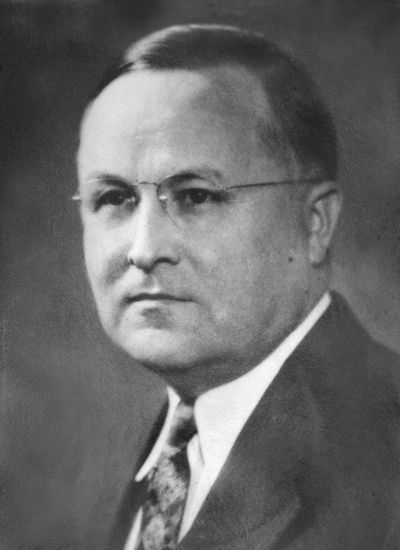 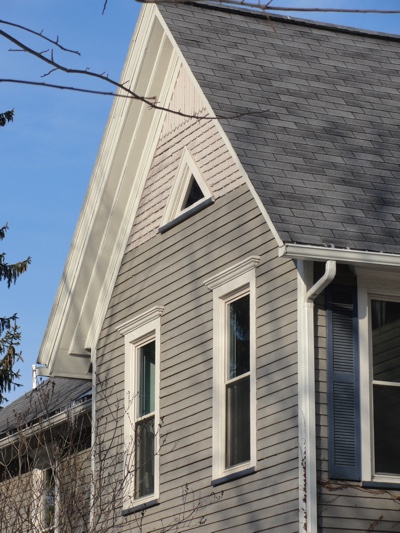 The gables have picket fence detailing and notched horizontal boards. This west-side gable has a triangler shaped window.

The gable on the front porch has eave brackets (modillions) and cutout patterns. 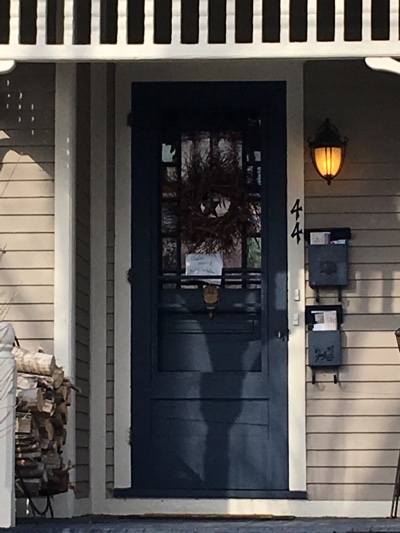 The upper part of the front door has a large pane of glass or lights with small lights surrounding it. The glass appears to be stained glass.