The Potter Memorial property has been a focal point of Fairport Village life for many decades. Donated by Frederick Potter to the village of Fairport in 1943, the property has since functioned as a community and teen center, public park and playground, and as a memorial to soldiers. Comprised of approximately 10 acres, the property is bordered by West Church Street on the north, Potter Place on the west, the back lot lines of numerous Filkins Street properties on the east, and Lewis Street to the south. 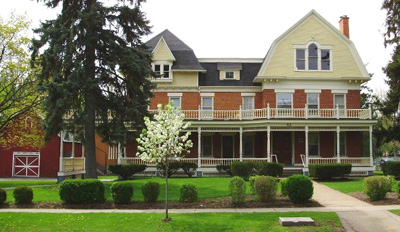 This front view of Potter Memorial, taken in 2010, shows the grand porch, carriage house and mounting block/carriage step on the front lawn.

The designation includes the house and acreage, the carriage house, and a large copper beach tree at the northwest corner of the property. The designation also includes a brick outhouse, the soldier’s memorial, and a mounting block, located between the sidewalk and the curb on West Church Street. The three-hole privy was originally located at 70 East Church Street and was restored by William Matthews and donated to the Village by the Perinton Historical Society.

Spencer Philbrick, a local businessman, built the home in about 1858. Philbrick sold the property to Davis C. Bloomfield, who retained ownership from 1865 to 1872. Alfred and Huldah Potter purchased the property in 1872, and began a major transformation of the house shortly after. Their son Frederick Potter owned the property until his death in 1943, at which time it was donated to the Village of Fairport.

The house was originally built of brick construction in the Italianate style. The house featured a low-pitched roof, with widely overhanging eaves supported by decorative brackets. A cupola, perhaps the most recognizable feature of Italianate design, was perched atop the roof. 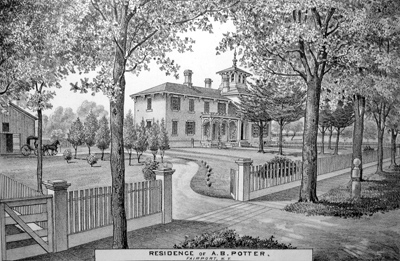 The house, circa 1858, and carriage house as it appeared in 1877 - Lithograph is from: McIntosh's, "History of Monroe County".

In the latter portion of the nineteenth century the house was dramatically renovated, and most of the Italianate features were removed. A wood framed third floor was constructed, with clapboard siding. A gambrel roof was added, and Second Empire architectural features including a mansard roof and tower, and dormer windows with detailed surrounds. A large porch and porte-cochere were also added at this time.

The Potters were one of Fairport’s most affluent families, and were financially supportive of many organizations within the community. In addition, before Frederick Potter’s death, he made available the substantial acreage of the property for community Victory Gardens. This use of the property continued after his death until after the conclusion of World War II. In June of 1945 a memorial to Fairport soldiers was dedicated at the northeast corner of the property. The memorial remains relevant today, and is the focal point of services to remember the contributions of Fairport and Perinton soldiers.

The village opened the Potter playgrounds in 1944, and in 1945 the Potter house began to serve as a community center. In the following decades, countless activities, clubs, and organizations have utilized the facility. The carriage house was used for many years as a Teen Center. It was renovated several years ago and looks much as it did when built.

Potter Memorial was designated a Village landmark by the Fairport Historic Preservation Commission in June of 2010. 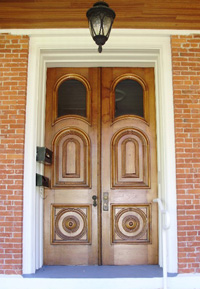 The original 9'4" high, chestnut front doors are designed in the Italianate style. 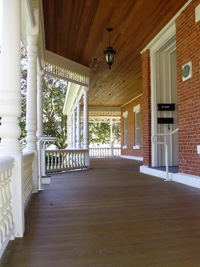 A large porch and porte-cochere were added in the latter portion of the 19th century.

The privy located in back of the mansion was originally located at 70 East Church Street. 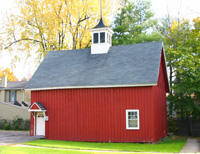 The carriage house is shown in the 1877 lithograph & was likely built at the same time as the home, circa 1858.