The elegant residence, the Seeley House, at 83 West Avenue was designated an historic landmark by the Fairport Historic Preservation Commission (FHPC) in August 2010. The Italianate style Seeley House is pictured in the History of Monroe County, by W. H. McIntosh, originally published in 1877 and looks today much as it did then. George L. Seeley built the home at 83 West Avenue in the mid 1870s. There is some documentation that suggest the house was a wedding present for his wife, Almira Beardsley. 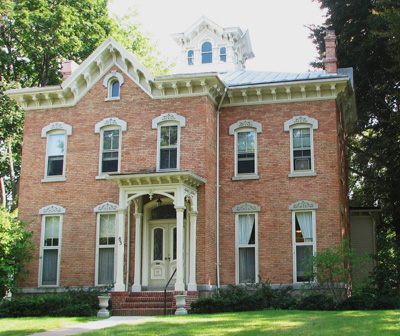 The house meets four of the five designation criteria according to the Fairport Local Preservation Local Law. The most important is its architectural style. It is one of the most elaborate  Italianate structures in the Village and has been well preserved. Immediately one notes the tall narrow windows with carved stone lintels above. The style of the intricate wooden brackets supporting the eaves is repeated in the porches and cupola.

The cupola is another Italianate characteristic. It has poked up gables on four sides with crowned Palladian windows, which have a carved fleur-de-le matching the carving on stone lintels below.

The front of the house has a gable with a fully arched hooded window in the peak and three windows across. The second floor windows frames are segmentally arched and the main floor windows are rectangular. The bottom sash of the lower window is eight inches deep. 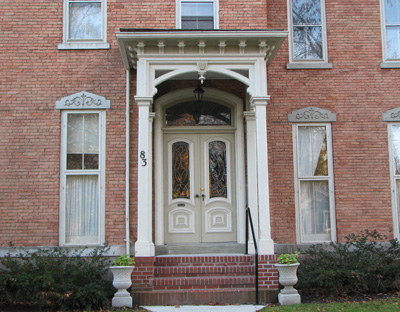 This home has large paired doors with a segmentally arched transom window above the doors.

George Seeley came to Fairport in 1847 and worked in the tin and hardware business in the Dickinson block. Within 10 years he had built a brick structure of his own on the corner of West Avenue and South Main Street where he did business until his retirement. The “brick block” later housed Bramer’s Corner Drug Store with Dr. James Welch’s dental office.

Seeley was active in public affairs, representing the First Assembly District of Monroe County in the State Assembly from 1889-89, and also serving as town of Perinton Supervisor for six years and Clerk for five years. In the village of Fairport, he served terms as Village President, Assessor and Treasurer. 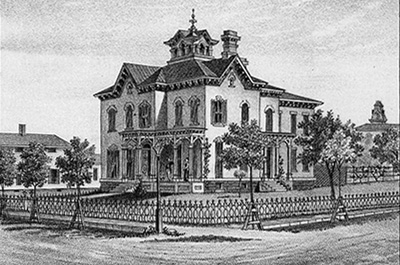 This house has an imposing elegance enhanced by two copper beech trees on the northwest corner. Its corner location means one sees it from many directions. It’s one of three brick homes in the area of the Village north of Church and west of Main Street. Its Italianate details have been well preserved. The Rochester Union Advertiser listed the house for sale July 20, 1888. The ad says: “…the fine residence…in a delightful neighborhood and from its observatory a view of the surrounding county can be seen for miles.

For more information on the Fairport Historic Preservation Commission and designated landmarks, go to the village website or to the Village Preservation page. 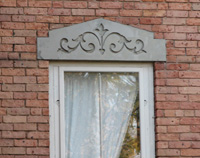 Carved stone lintels are over all the windows in the main section.

The cupola has bracketed eaves, poked up gables and Palladian windows. 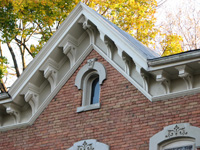 The front of the house has a gable with an arched hooded window.

Close-up of brackets under the eaves. 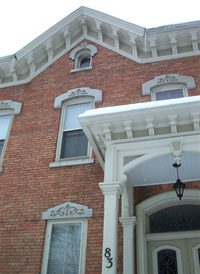 This home has matching decorative brackets on the cupola, upper story and under the porch eaves.

General John Alfred Reynolds purchased this home in 1908. For more information, download the April 2017 issue of the Historigram.