The Silver House and Carriage Barn at 53 Roselawn Avenue in Fairport was designated a local historic landmark in 2016 by the Fairport Historic Preservation Commission (FHPC). The “Historic Resources Survey of the Village” completed in 2014 ranked this property a Green Plus, which “indicates high integrity plus special architectural character”. 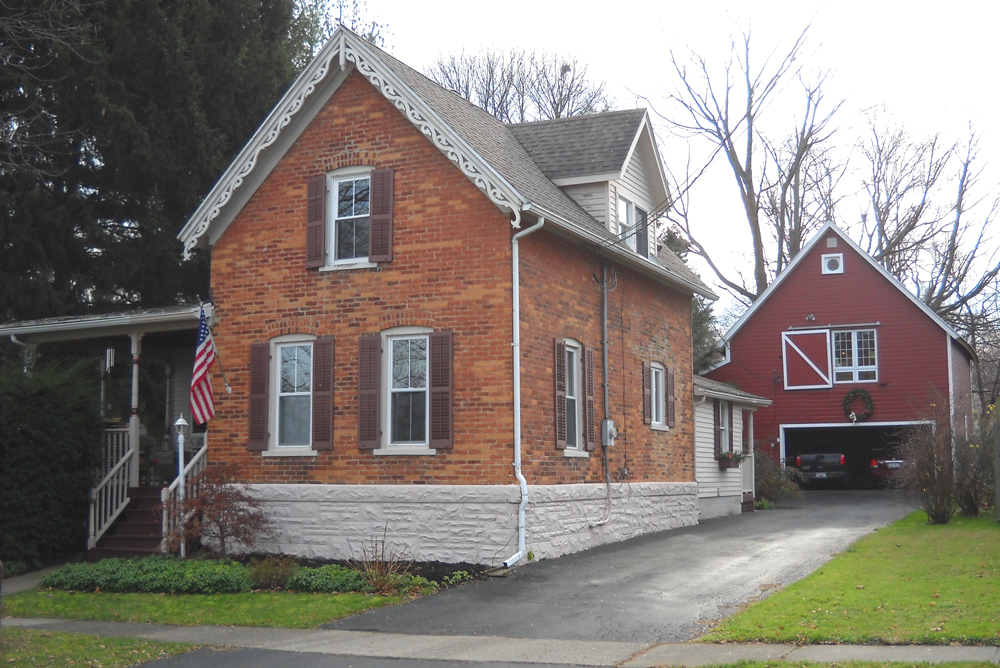 The home is brick with decorative vergeboards, a unique feature of the Cottage Gothic or Gothic Revival architectural style. The home was built circa 1870 and Harvey O. Silver built the carriage barn in 1895. The front tree-lawn area has two hitching posts and a carriage step that were designated by the FHPC in 2011.

The Silver home at 53 Roselawn Avenue has an unusual form for a Gothic Revival. It has an L-shaped cross-gabled form with decorative vergeboards with center pendants on the gable ends. It was built in the late 1870s and the the carriage barn was built in 1895.

Very early in the properties history, the land was owned by John Smith, then Jeremiah Chadwick and in 1869 was sold to Thomas A. DeWitt. The 1872 map shows T. A. DeWitt owning this parcel on North Street and having a connecting parcel with a house on Cherry Street. In later years, North Street became Roselawn Avenue and Cherry was renamed West Avenue.

By 1885 a lithograph of the area shows a completed house with front porch and summer kitchen in the back. Thomas DeWitt had sold the property to Pauline D. Westfall, wife of Henry.  In 1895, Fannie L. Silver, wife of Harvey O. Silver, purchased the property from Zadie Westfall Carroll.

The Silver’s ownership of the property is important because he built the barn in 1895 and used it along with the house for his furniture and undertaking business. The family had come to this area after owning businesses in Savannah and Sodus NY. In 1901, he helped form the Fairport Mutual Burial Association and was Secretary, Treasurer and Undertaker for the organization. That same year he rented space for his business in the Bown Block on Main Street in the village and then later sold the business to Leon M. Sherburne. Harvey Silver died in 1905 and soon after the home was deeded to their son, Henry D. Silver. 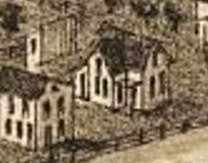 The role of the carriage barn during that period was important for businesses like Silver’s. 1895 was prior to the onset of the automobile and a stable was needed to house horse and carriage. Carriage houses typically had an oversized door for the horses to enter and very large hinged or sliding door for the vehicle.

The overall size of this carriage barn is very large for a village property and could have housed more than one horse and several carriages. The door now widened and lowered was even taller than a normal barn door to accommodate a hearse. It had a hayloft opening, now a window, and a small window at its peak. The hitching post and carriage step in front, which has “Silver” engraved on it, were used when family members and guests came to pay their respect.

The Beck & Pauli, Lithograph published in 1885 shows a completed house with front porch and summer kitchen in the back.

It is likely that Silver made caskets as well as furniture in his 30’ by 40’ carriage house. His establishment and especially the way he utilized his home as a funeral parlor and the barn for funeral preparations fits into customs in our area in the late 1880s. Prior to an undertaker’s services, close family did all arrangements and the dead were placed in the family’s front parlor. After the Civil War embalming became more popular and an undertaker’s services were needed. 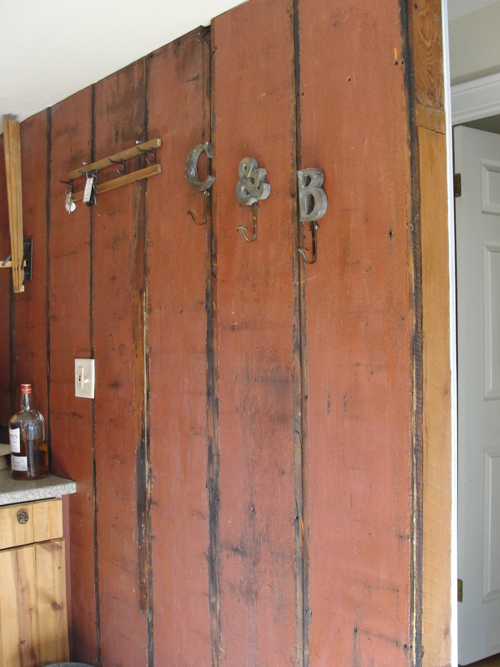 There have been several other owners of this property, Birdienice and Charles Walker, Sarah and Jesse Campbell. In the 50’s and 60’s many older residents may remember Marcie and Rudolph Billings and Cora and Walter Pappert. Mr. Pappert was very involved in youth programs in Fairport and received the “Paul Harris Fellow Award” from the Fairport Rotary in recognition of his devotion to community service in 1976. The Newman’s owned it for a short period and sold it to Elizabeth Russotti.

The current owners reused canal boat boards from the original summer kitchen when they added a vestibule on the west side of the home. 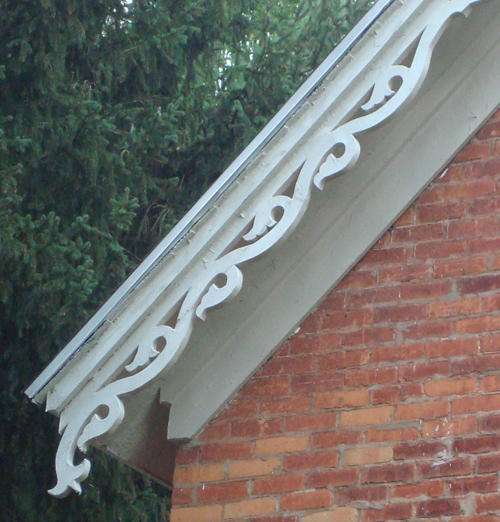 The Landmark Society of Western New York Survey of Village of Fairport in 1976 identified this home as a Gothic Cottage or Gothic Revival style. Andrew Jackson Davis made the style popular in the 1840s, features of which were used until about 1880. Many churches and government buildings are Gothic Revival.

The home at 53 Roselawn Avenue has an unusual form for a Gothic Revival. It is an L-shaped cross-gabled home, which gives it an asymmetrical ground plan. Many Gothic Revivals have gabled ends and protruding front gables. In this case, the home has front and side gables adorned with decorative vergeboards with center pendants.

The windows are segmentally arched, with a double row of fanned rowlock brick that forms a lintel and wood louvered operable shutters. There are only two other homes in the village of this cottage style and brick homes are also quit rare in the village.

The highly decorative vergeboard is a key feature of a Gothic Revival or Gothic Cottage style home.

For more information on the FHPC and designated landmarks, go to the village preservation page or the village website. For more examples of carriage barns in the area see the Barns and Carriage House page.

Canal Boat Boards & Ghosts!
Learn more about the canal boat boards in the house and ghosts in the barn. President Bob Hunt talks about his designated house and carriage barn in the March issue of the Historigram.

The windows of this brick home are segmentally arched with a double row of fanned rowlock brick. There are also operable louvered wood shutters. 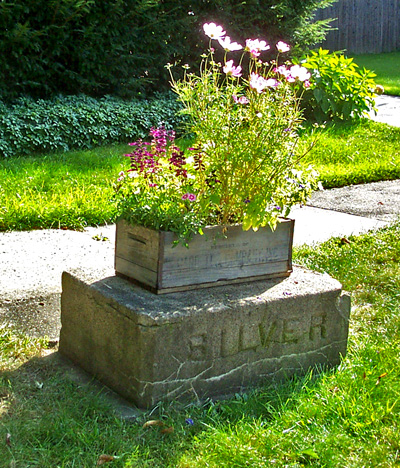 On the tree lawn area of this property are two hitching posts and a carriage step, which has “Silver” engraved on it. These were designated in 2011. One of the posts was moved from 58 Roselawn Avenue to this location. 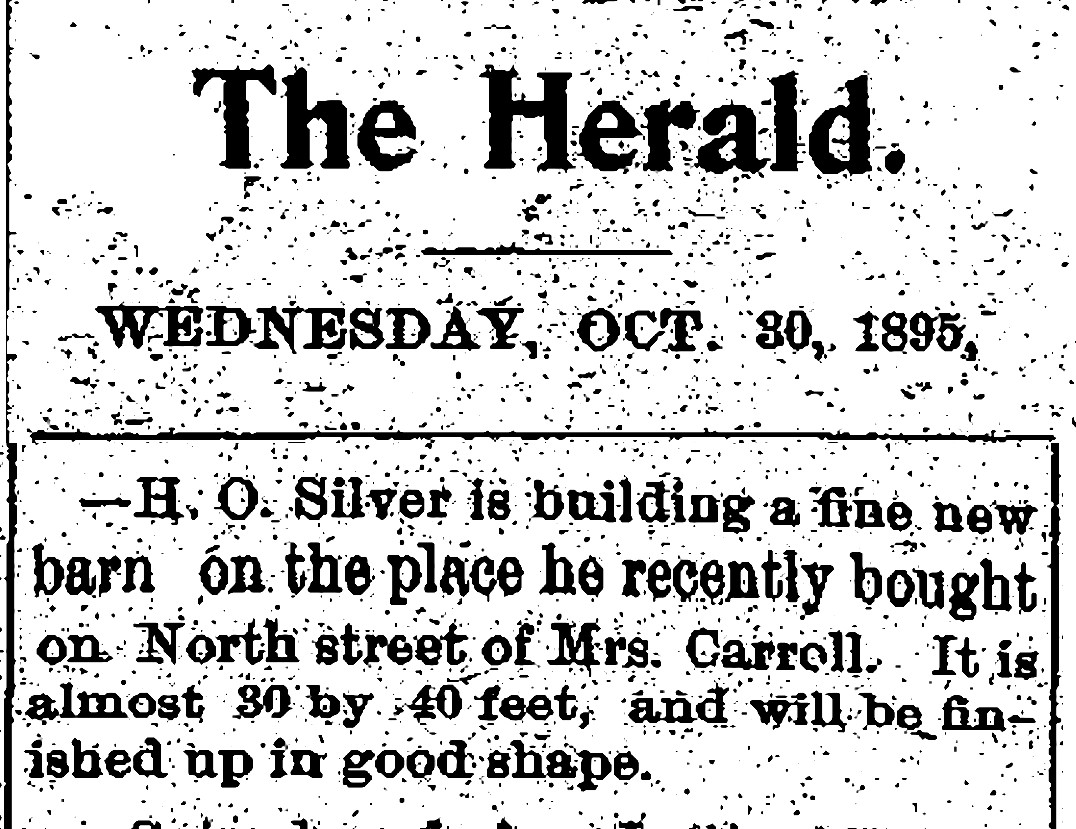 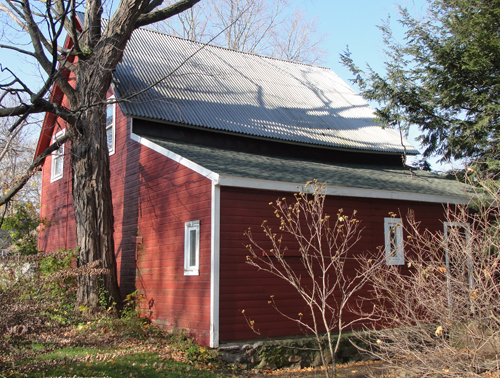 On the side section of the barn there is evidence of stall windows. The horizontal siding is cove lap. 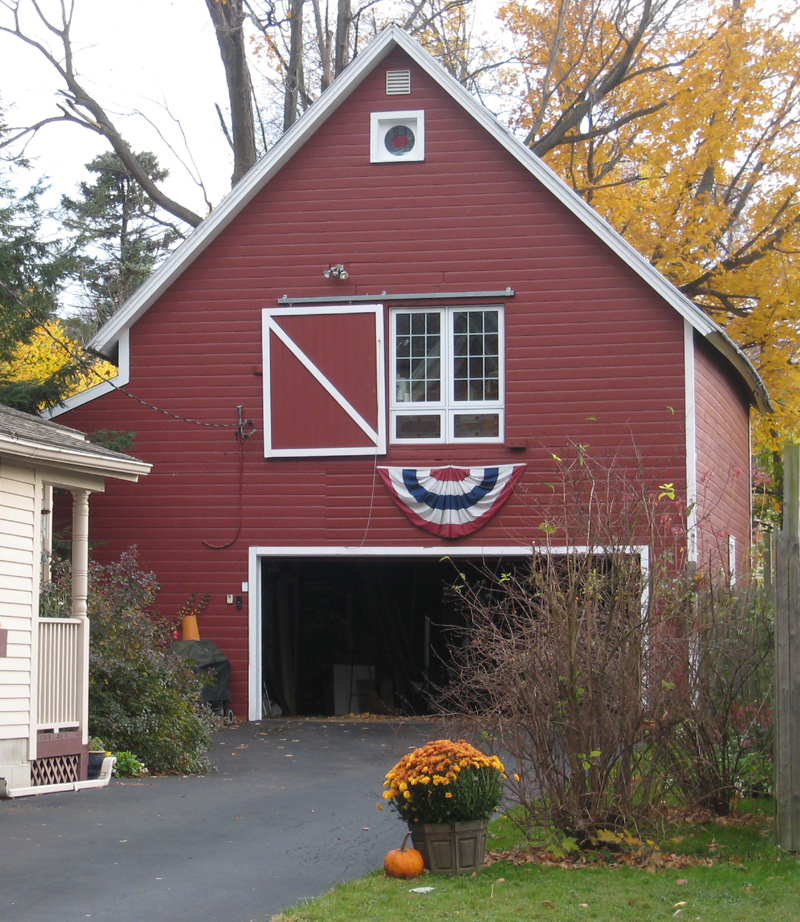 H. O. Silver used the barn along with the house for his furniture and undertaking business. The original door to the barn was high and narrow to accomadate a hearse or wagon.

For more on barns and carriage houses in the area, see Barns & Carriage Houses.