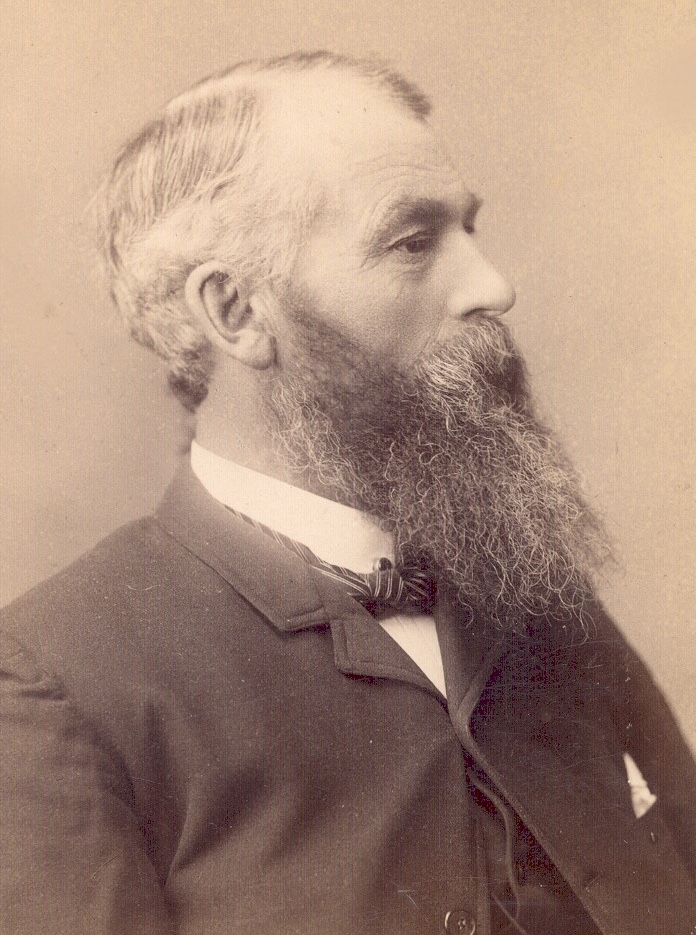 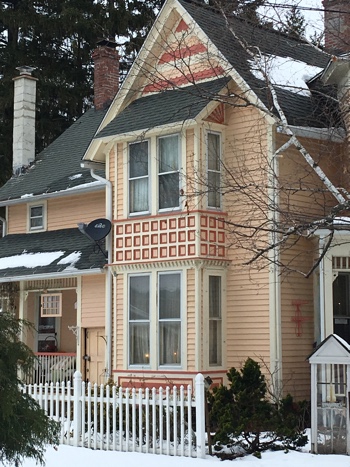 The Village of Fairport’s Historic Preservation Commission in 2018, designated the William B. Bly House at 20 Woodlawn Avenue.

The home was built in 1886 by Mr. Bly and reflects the Queen Anne style that was popular at that time. Like the Shingle style before it, the Queen Anne uses wall surfaces as primary decorative elements. The home met the criteria for designation because of  historic interest, personages, architectural style and is a recognizable feature of the neighborhood.

The home has a rectangular bay window on the south side that has large decorative panels below the first-floor windows and bands of square panels three high, above the windows.

History & Ownership
William Bly was a well-known and respected contractor and builder in the area for 30 years during a period of rapid population growth in Fairport. As early as 1876, he had built a house on West Avenue - “Wm Bly for himself, a dwelling on West Avenue commenced last summer and now being finished, cost of about $2,800”. At this same time, Mrs. Emma Bly had a Millinery shop on Main Street. The newspaper advertised a “Fashionable Milliner and Dressmaker."

Bly had the contract for carpentry, mason work and front cement walks when the Hawkins block was raised. In 1895, he built J. W. Pramelee’s house at 29 West Street. The house is cross-gabled with a porch and turret above it. He built this home in the same year that he added a porch and turret to 20 Woodlawn.

It is not known, but very likely that he built a similar turret to Will O. Greene’s house at 23 Woodlawn. In 1897, he completed Martin Austin’s house at 52 W. Church Street, and began work on the Railroad Station in Despatch.

He was involved in the community by serving on the YWCA Board of Directors and as President in 1895. He was also nominated for Overseer of the Poor at the Prohibition Caucus. William B. Bly died in 1900 and is buried in Mount Pleasant Cemetery in the village.

Mrs. Bly sold the house to Jerome Rundell in 1903. She moved to the Howell House, likely 44 W. Church, and built a Colonial Revival house at 24 Woodlawn in 1904.

The Rundells converted the house to a double, and in 1953 rented to salon owners Ruth and Louis Yantz. The business name changed from the “House of Beauty” to the “Louis Beauty Shop”.

The current owner bought the house in 1957 and in 1995 started a Bed and Breakfast called  “20 Woodlawn”. For many years PGA attendees and many other visitors to Fairport have stayed at the B & B. 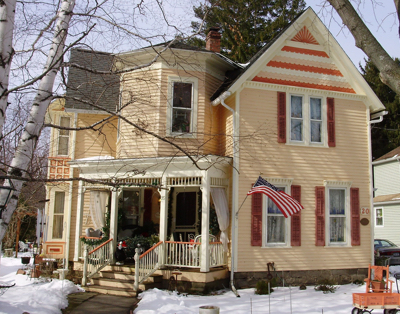 Queen Anne Architecture Style
This home which was built in 1886 reflects the Queen Anne Style that was popular from 1880 to 1910. 50% of these houses have spindlework and details like bay windows, turrets and irregulars floor plans. 20% of Queen Anne’s had simple cross-gabled roofs.

The porch and turret are believed to be an addition done by Mr. Bly in 1895.

This house has a cross-gable form with a gable stepped into two gables on the north side and a two-story addition. The front porch is at an angle and has a second-floor hexagon turret with a low-pitched roof.

The windows are one-over-one double hung. There are two windows grouped on the second floor in the front gable and a rectangular shaped 2-story bay on the southside with a shed roof. The smaller gable on the northside has a ribbon of three double-hung windows with the center one wider with clear glass. The window panes on the side windows have 2 small panes on the top and 2 small panes on the bottom. All the panes are stained glass. 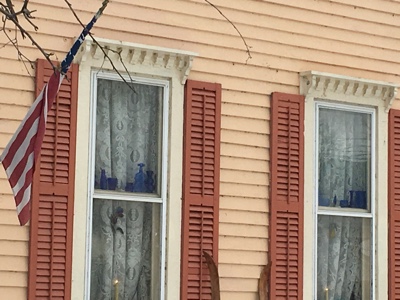 The window hood designed for this house is approximately 1 1⁄2” thick and projects out from the wall by about six inches. Each hood features a course of modillions supported by scroll-sawn brackets. Like the modillions on the gables, they are a simple ogee shape mounted on a base board with half-round cuts between the modillions.

The south side gable has the same shingle pattern and a band course of modillions. Located under the shed roof in the triangular shaped wall surface of the bay is a quarter round sunburst panel. It also has large decorative panels below the first-floor windows and bands of square panels three high, above the windows. They continue around a curved corner board to the two short walls of the rectangular bay. 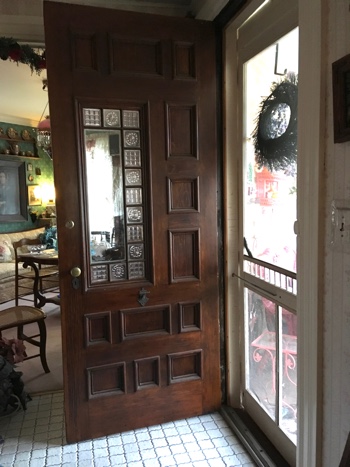 The front door features bull’s eye and pressed glass squares surrounding a plate glass lite in a playful asymmetrical design of square and rectangular wood panels. It has the original mechanical lever and doorbell. The front entrance has a wood screen door with decorative brackets.

The front door has an asymmetrical design of square and rectangular wood panels.

Woodlawn Avenue was developed as wide street with a median planted possibly with Magnolia trees. The planted median appears in the bird’s eye view of Fairport in 1885.

Feature of the Neighborhood
The home, sometimes hidden behind the leaves of the birch tree in front, is known to Fairport residents and visitors to our village. It has a unique porch and turret in the corner of the gables and many interesting and unique Queen Anne features. Since 1995 the home has been a Bed and Breakfast, simply called 20 Woodlawn, and was featured in the 2010 Front Porches of Fairport calendar. 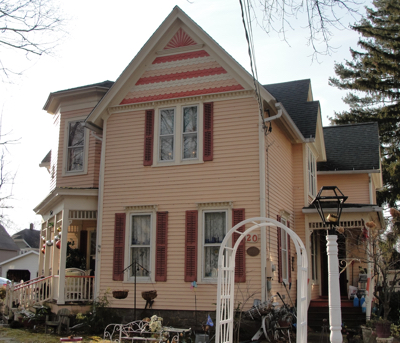 This house has a cross-gable form with a gable stepped into two gables on the north side and a two-story addition. 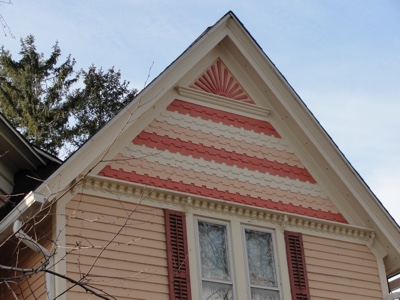 Each gable has rows of decorative shingles, a half-round sunburst and a course of modillions. 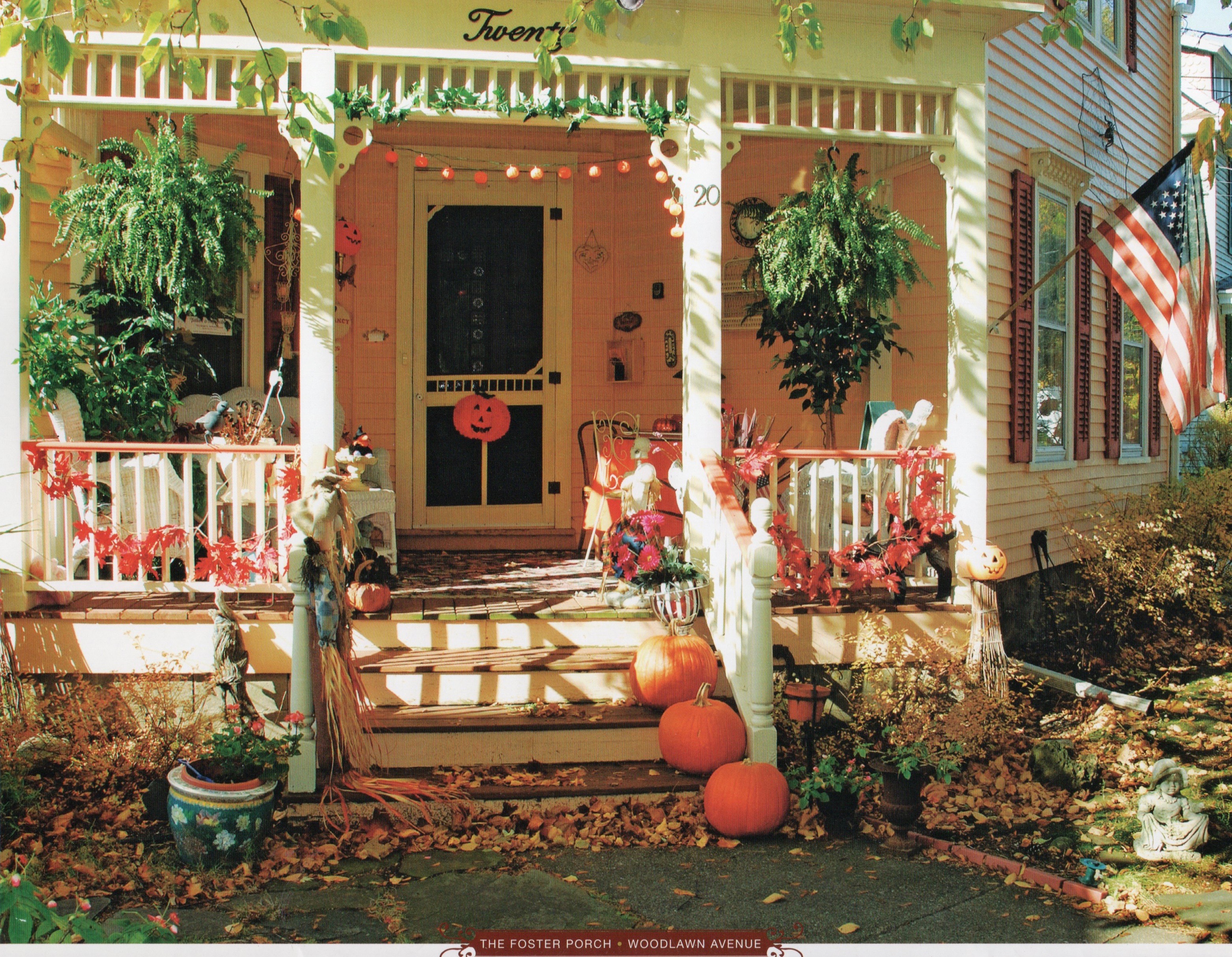 20 Woodlawn was featured in the 2010 "Front Porches of Fairport" calendar. Original photo by Keith Boas. 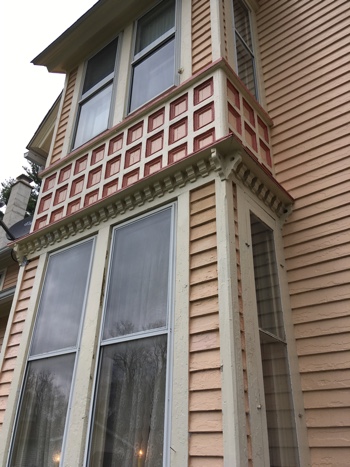 It also has large decorative panels below the first-floor windows and bands of square panels three high, above the windows. 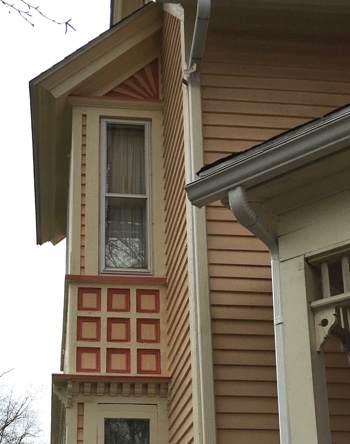 Located under the shed roof in the triangular shaped wall surface of the bay is a quarter-round sunburst panel. 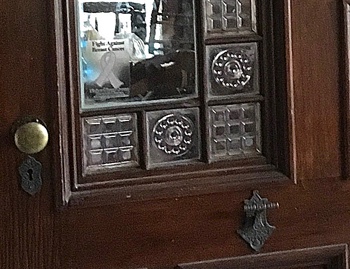